Are you ready for Adventure?


Welcome back to the Conversation! Today I am joined by Kristin Brumley one of the talented folks behind Basic Adventuring 101.  Thank you for joining us today Kristin.

You’re very welcome! Thank you for having me.

Basic Adventuring 101 is a webseries with an interesting premise, would you care to tell us about it?

Basic Adventuring 101 is a fictional webseries that features a group of Live Action Role Players.  It is done in a positive way that represents LARPing the way we feel is accurate and appealing! We follow the story of a new LARPer, Karen, and a hilarious adventuring team that is faced with saving their kingdom when Karen accidently releases a terrifying evil from a mysterious treasure box.

You can watch our pilot episode here.

As a long time supporter of all things roleplaying and acting I have a natural curiosity about LARPing, could you tell us a bit about LARPing?

LARPing stands for Live Action Role Playing, and it’s a type of game where you act out a character that you have created. It’s really a hobby that involves many different interests--from acting and role play to combat, puzzle solving, costuming, and storytelling.

Your campaign says that you want to “produce it in a way that makes our fellow LARPers proud to be called LARPers.”  What do you mean by that?  Is there a negative stereotype to LARPing and why do you think that is?

I feel that in the movies and TV-shows I’ve seen featuring LARPers, we’re often made out to be something we’re not.  Socially inept psychopaths and drug addicts isn’t a pretty picture when trying to convince new people to try a game.  I like to think of LARPers as extremely intelligent and creative people who are courageous enough to do something they love, despite the fact that it isn’t “normal.”

I know very few people who have given LARP an honest chance and came away from it disappointed. If more people were willing to play I think they’d find that they like the game just as much as we do! The trick is trying to convince people to make that step--which means fighting the stereotypes that exist because we’re part of the minority.  Without experiencing LARP in person it can often be misunderstood. Plus, I think Hollywood likes the idea of weirdos in the woods. They believe it’s more interesting than the reality.

I live life by example.  Showing people what makes LARP incredibly fun by creating a webseries is my way of doing that. 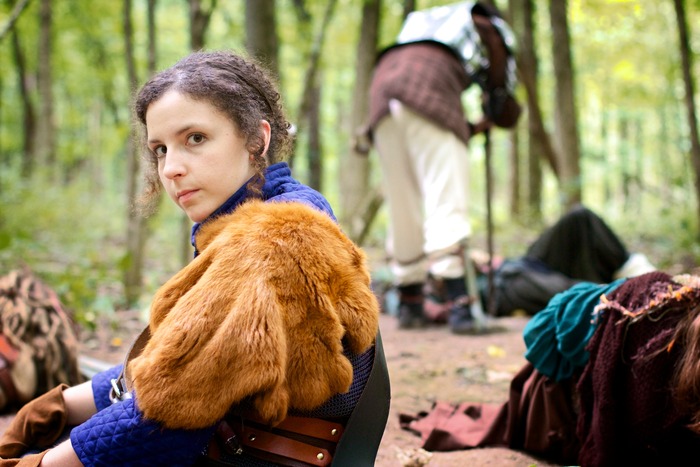 How did you get involved with LARPing and then into this project?  What do  you enjoy about LARPing?

I started LARPing in 2009 as a desire for adventure.  I love trying new things and when I saw a photo of people dressed up in costumes in the woods pretending to be fictional characters--I couldn’t resist.  I showed up to my first event all by myself, and by the end of the weekend I was hooked.

I’d always loved making stories in my head.  I was the child who would spend hours in the backyard in a bonnet and dress, pulling a wagon along and pretending to be an American settler on my way to Oregon.  Even now that I’ve grown older, I write novels and daydream constantly. When I went to that LARP event it was like everyone was joining in on the game in my head and turning it into something larger and grander than I could manage on my own.

I could imagine a character--entirely of my creation--and it could become real for a few days.  It allowed me to discover myself better. It allowed me to become a better actress. It also allowed me to make better and more meaningful friendships.
My best friends in the world are people I met while LARPing.  There is something about pretending to save the world with other people that really bonds relationships on a level you can’t achieve just rolling dice at a table.

I want to share these experiences with people who might not otherwise consider LARPing.  I want to give other people this sort of chance at something different and wonderful--and a webseries seemed like a great way of doing that.

Last year you came to Kickstarter and raised over $6,000 to create the pilot to this series.  How was that experience and what have you learned from that campaign that you’ve brought to this one?

It was tiring. Haha. Running a Kickstarter is probably one of the most exhausting experiences of my life, because it basically consumed me for an entire month.  Constantly checking the page and my email for backer updates, speaking to press, writing press releases, looking for sponsors...it’s not an easy task, and it’s preceded by weeks of preparation.

A successful Kickstarter is extremely planned out.  From the rewards to the campaign timing to the video and goal amount, all of it has to be carefully decided.  I have pages of excel sheets comparing reward prices and budgets and it can be really stressful when you realize that you can spend weeks deciding all of this and still not make your goal.

One of the biggest things I learned from the last Kickstarter was that you can’t give up.  For the longest time we didn’t think we’d make it. It looked grim and it might have been easy to just call it quits! But we kept pushing, and thanks to our diligence and passion we managed to not only hit our goal--we surpassed it. 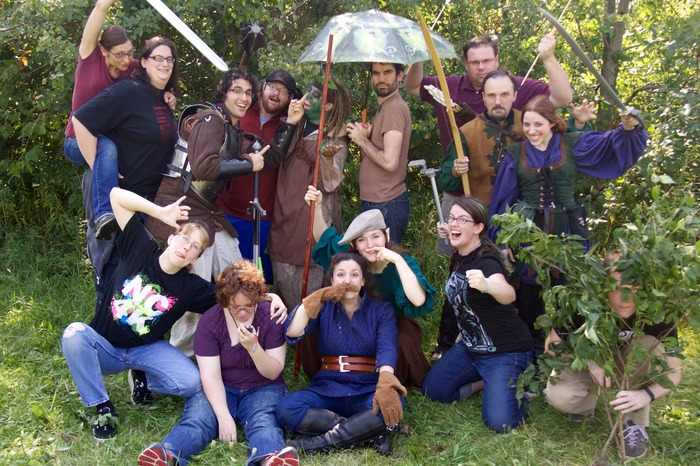 You have brought together quite the cast of characters!  How did you all get together on this?

Haha, that sounds awful...but honestly, I love networking and meeting new people.  When I decided I wanted to start a webseries it was honestly as simple as going through my list of contacts and pulling out who I needed to make it happen.

It’s amazing what happens when you ask for what you need.  If I didn’t have the connection, then someone else did! I guess that’s why it’s so great to have friends.

As any long time reader of this blog can attest, I love pie charts for budget breakdowns!  How important was it to you to breakdown the budget and present it to potential backers?   How much of the non-perishable items such as props from the pilot are being reused for the full series?

It’s important to be honest with the people who are supporting you.  I wanted to show what the money was going toward and to be as open as possible without making it too complicated (especially for people who aren’t familiar with video production).

The budget was something I spent a long time deciding. It’s hard to look at numbers and to calculate when you really need to make a project successful--and then consider how much money you think you’ll actually be able to make.

$25,000 for our Kickstarter was a challenging goal, but I felt it was a number that covered what we needed without cheating the people who are working hard on this project.  Challenging, but not impossible.

The biggest expenses come from the fact that while we have a lot of non-perishables that we can use for filming (equipment, costuming, weapons, etc.), there are a lot of expenses that didn’t exist for the pilot but will for the rest of Season 1.  Professionals who agreed to volunteer for the pilot expect payment for the rest of the season. Some of our actors need help with their travel expenses, otherwise they can’t make it to our set. Our free location is no longer available to us and now we have to pay location fees and lodging. There is filming equipment we didn’t have but want to rent in order to make the quality even better (and easier).  And finally, we are going to need more time to produce 5x more content than we did last summer--which means all of these added expenses for a longer timeframe.

Producing a quality product simply isn’t cheap, and while I think we could manage for less money it wouldn’t be the sort of quality product that I would want attached to the name, Basic Adventuring 101. It’s a hard decision to make, but one I feel is necessary. 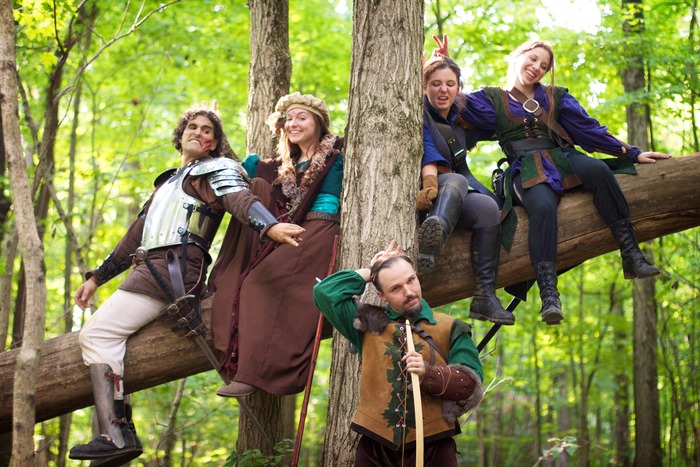 Where you recommend folks who are interested in LARPing go to find out more?  Is it only for those who enjoy roleplaying and acting?

I really enjoy Larping.org’s site.  They have been working very hard on creating a list of available LARPs on their LARP locator, and I know the people running the site.

LARPing is something that people do for many different reasons.  It’s about figuring out your niche and making it your own.

I was introduced to it by Mark Truman, a game developer at Magpie Games who has done a lot of work with Kickstarter in the past.  I was recommended to him by my friend, Pete Figtree, and Mark spent a lot of time with me discussing marketing and strategy.  Honestly, it was Mark’s help that made it possible.

Providing constant content and being present during the campaign is a big part of engaging backers.  We’ve got some new videos in the works, as well as some new exciting rewards thanks to the support of LARPs around the U.S. 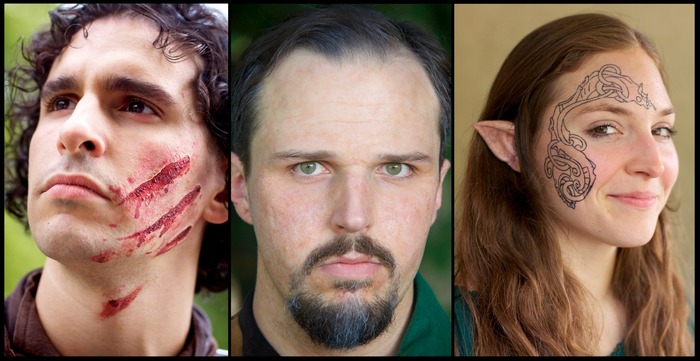 I am a social media and marketing specialist for my day job, so this is where I am spending a lot of my time.  Press releases, Facebook, Twitter, Google +, YouTube...you name it. I’m excited to update it daily.

Plan, plan, plan. It’s all about thinking it all through and approaching it like a marketer. I also have written a blog post on my tumblr page on this topic. I encourage you to check it out for more details.

I’ve been humbled by the support we’ve received for not only our Kickstarter, but our series in general. I want to thank all of you who have become our backers and fans! Your diligence in sharing us online and trusting us to do great things with your hard earned money is what makes this project possible!  I hope we’ll get to work together for a long time.