There's some Mischief in the air


Welcome back to another Kickstarter Conversation!  Today I am joined by Luke Peterschmidt, creator of the family friendly card game, “Fairy Mischief.”  Thank you for joining us today Luke!
Susie: Hi! Thanks for talking with us about Fairy Mischief! We are all really excited about this game!


Would you be so kind as to give us an overview of your game?


Susie: Fairy Mischief is a card game that is super fun, quick to play, easy to learn and helps transition young girls into more advanced analog games as they get older.

What was the inspiration for making a transitory game bridging the gap between the classic card game “War” to something more “gamey?”

Susie: Our daughter. She is 9 and loves to game. We wanted to make a game that was simple enough that she could take it to a grandparents house or a friends house - and it would give them something fun and quick to play and also something that she could easily explain to other kids that may not be as gamer-y as her.  Fairy Mischief exposes them to elements more than just “who has the bigger card” - that is where the dice roles, charm collecting, multiple duels and the mischief chart comes in!

Can you explain the basic gameplay?  [Note: I plan to embed the gameplay video here]
Fairy Mischief is based on the mechanic of war - but adds other fun elements such as: multiple duels, collecting, dice-rolling, and other outcomes that will cause you or your opponent to gain or lose charms!


You have a very fun art style for this game, who’s in charge of the art design?  Where did the artistic concept come from?
Jay: As Art Director, I am in charge of all design and art direction for Fun to 11. Susie and I own our a graphic design studio, so the design for Fairy Mischief was a collaboration. We really let Jasmine’s artwork drive the design - it is always exciting to be able to work with an amazing artist! 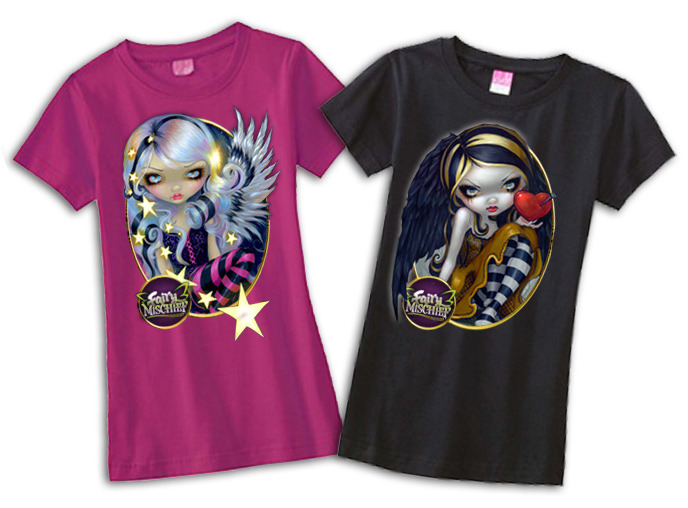 The images of the game look fantastic with the tin and all the components.  How complete is the game?  Is it basically ready to go to the printers?
Jay: The game is very near completion. We are tweaking rules and finalizing packaging. By the time the Kickstarter campaign ends we will be about 85% ready to go to print.

What kind of playtesting did you do?  What age groups did you test it on?
Susie: On our side - we tested this with girls that ranged in age from 5 - 12. They battled each other and then also battled with us, and other adults - such as aunts and grandparents. A fun part about this game is that they are quick games - so when one of the girls would lose - there was always heard “hey, let’s play another one!”.


As a father of two I’m always on the lookout for games to play with my kids as they get older.  How old will my kids have to be before they can play Fairy Mischief with me?
Jay: I would say that kids as early as five could probably play the game. We suggest that for the younger ones that you can simplify the game even further by just playing one card instead of three and making the winning condition  - the first person to collect 5 gems, instead of one or each color. 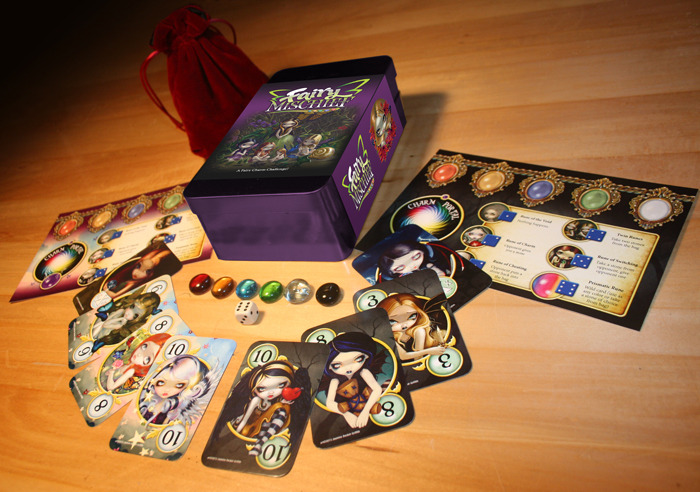 So what previous game design experience do you have?
Jay & Susie: None - this is the first game we have done. We have worked on and off in the game industry as graphic designers for about 18 years, but never really touched game design outside of the artistic realm before.

What is the long term goal with Fairy Mischief?  Will you be printing up enough for sales beyond Kickstarter or is this a Kickstarter only distribution?
Luke: We will be definitely be printing more copies than just he Kickstarter ones! While we expect to distribute a small amount to classic “mom and pop” hobby retailers, we are also working on trying to find other places that would be interested in the product from catalog retailers like ThinkGeek to more traditional retailers. We also want to make sure the product is available at Jasmine’s gallery in Disney. 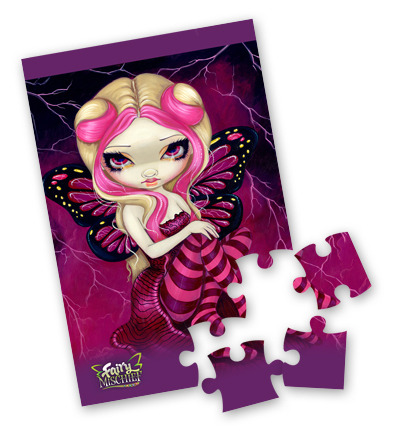 How did you discover Kickstarter?
Luke: Fun to 11 was on the Kickstarter bandwagon pretty early. When we saw how it worked, we could tell that it would make a great outlet for our creative ideas that don’t fall into our normal jobs. It’s great to be able to take a product right to the people and basically say “do you want it?” BEFORE you choose to print it!

Luke: I’ve said this a lot of times, but this is the hardest Kickstarter project we’ve ever tried. The normal Kickstarter audience just doesn’t do much shopping for kids on the site - it’s more about early adoption/adopters. This means we’ve had to work super hard on getting the word out. Updates are great, and we’ll have a lot of them that are hopefully interesting and keep the momentum up, but for us, the key is reaching outside the normal Kickstarter community and bringing in new people. For a lot of our backers, Fairy Mischief is the first thing they’ve ever backed on Kickstarter! We’ve got media outreach going on, a raft of ads and placements, interviews like this, and so much more. PAX was also a great help to us as people got to see our passion for the project first hand. As we gear up for the last week, everything is going to get ramped up even further.


What kind of media attention have you received with your project?  How are you spreading the word?  Facebook?  Twitter?  Google+? Youtube?  Advertising?  Are you using Kicktraq to track your progress?
Luke: We’re doing lots of the things I mentioned above. But the best way for us to get new backers at this point is to get existing backers to spread the word. We’ve had some great posts on BGG from backers, and some really positive WOM is starting to form. I look at Kicktraq, but not so much for the projections. Our campaign is really different, so I don’t expect the tracking algorithm to be very accurate - but I do look at from time to time to check on backer flow. If you look at our campaign for Fairy Mischief and compare it to our campaign for Flame War or any other board game, you’ll see two very very different looking charts when it comes to how many backers we get in a day - that’s due to the difference in the product and our outreach.

Do you have any tips/advice would you give to anyone looking to start a Kickstarter?
Luke: I actually give panels with a friend of mine Ryan Dancey at tradeshows where we talk in great detail about Kickstarter - how to do it, how to do it better, what to learn from others, etc... There is a lot to learn, but all the info is out there. I would encourage anyone with an idea to try it out, just put in your research time before hand so you know what to expect. And whatever you do, don’t forget to figure out shipping - the secret killer of Kickstarter.

Thank you for spending your time with us!  Do you have any final thoughts for our readers?
Luke: Two things. First off, I want to thank Jasmine Becket-Griffith for letting us use her superb art in our game. Not only is it perfect in tone, but it’s awesome that we have a female gamer contributing the art for a game for girls! Second, I’d like to thank your readers for taking the time to read this and for checking out Fairy Mischief. If any of you readers want to get more girls into analog gaming, please share this interview and a link to the game with your friends. We are fighting for every backer as hard as we can because we really believe in this project, and we can use all the help we can get to make Susie and Jay’s game a reality.