Futuristic racing at it's finest!

Welcome back to another Kickstarter Conversation!  Today I am pleased to be joined by the team behind a great looking Kickstarter film: Momentum.   Thank you folks for joining us today!


Thank you! We are very honored to be able to be featured with your website.

I have to say from the images to the story the entire project sounds great!  Would you care to give us a round-down of the film?

The story follows our main character Ethan Knight who works 2 dead end jobs to pay the bills and through the years keeping up with that, he loses touch with having a passion in life. All the while, he still has not found a common ground with his now 21 year old daughter, Charlie. The distance between the two of them and the passing of Charlie’s mother, his wife, was never truly resolved. What you will be seeing is Ethan finally getting closer to Charlie and he finding that fire again in life with maggy racing.

Now the project is called a “short” film, how short is short?
About 3 minutes to show off everything at its best.

You’ve mentioned that your team has already put time and effort on their own dime into this project.  How much of the film is already completed?  Is it all just pre-production?  Just casting, concept art, and the like?

Yeah currently it is in pre-production stage with locking down the actors, locations, wardrobes and at the same time getting the props prepped.

So futuristic racing?  Is this like NASCAR or World Rally or something with no basis in reality?

Thanks! The concept art were done by Mark Yang, Robert Simons and Peggy Chung who studied at Art Center College of Design for Entertainment Design. Between the 3 of us, we sketched out thoughts of what the vehicles could be and then had several meetings with Joe Reiter, our technical consultant, to figure out the logistics and how it could really work in real life. After those meetings, we would modify the vehicles and the magnetic emitters (the beams on the buildings of the scene above) accordingly.

I know it’s a bit early but I’m wondering what 3D software you think you’ll be using for the SFX?

While personally I prefer non-physical rewards, I do know many who don’t like download only films.   Is there any reason why there’s no Blu-Ray or DVD reward levels?

Mostly because this project is a very short “short”, and we felt it was best to just keep it digital.

It is always fun to look at the top tier rewards and go, “ooh if only” on your high end you’re actually offering Producer level credits on the IMDB page?  Along with doing consulting work/concept art for a backers own project?  Those are some pretty interesting rewards!  Though I didn’t notice a walk-on or other such appearance in the film.  Was there no place for such things in your film?  No crowd scenes we could fill out?


There are spots for that but our turn around time is pretty quick as we will be filming in 4 weeks- not a bad idea though! 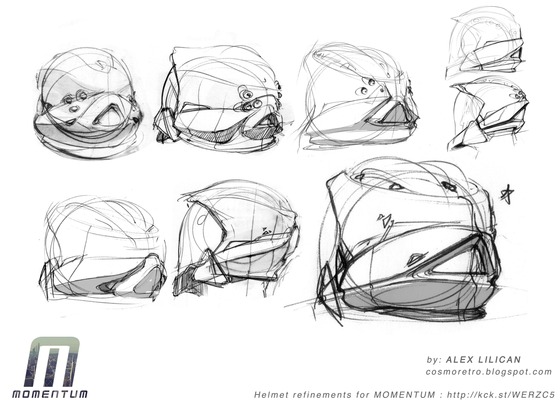 As a former JPL employee myself (in the dark room) I do find it interesting that you have Joe Reiter from JPL/NASA on board, how did you snag him?  Is he just doing background work and color commentary for the campaign or is he involved with the production?

Joe Reiter was one of the professors that Mark, Robert and Peggy had while attending Art Center, he is a teacher for Theory of Structure. He is an integral part of our team when it comes to fleshing out more of how the vehicles and the emitters work.


How did you discover Kickstarter?
It has been around for a while and we have known people who have been successful through it and only had positive things to say about it.

I have been seeing and interviewing more and more film projects here on Kickstarter.  Do you think crowdfunding in general and Kickstarter in particular are becoming the “go to” place for film funding?  Especially now after a Kickstarted film won an oscar?

It is a great place to gain funding and exposure for the film you plan to make. No doubt that the extra publicity it has been receiving will definitely bring more people looking to fund projects and also people looking to get funded.

Yeah we have spread the word to facebook, twitter, google+ and through popular concept art websites, also more blogs and online publications. Not using kicktraq really, the Kickstarter one is pretty good in terms of seeing what is coming in.

A lot of prep a month or two before. Getting in touch with webpages - giving them a heads up that you have a Kickstarter coming.

We can’t wait to show you guys what we will have to show throughout the project and the final product!

Thank you for taking your time to feature us!