Welcome back to another Kickstarter Conversation!  Today I am pleased to be once again joined by a Stripsearch alumn, this time Maki Naro has stopped by to talk to us about his Kickstarter project: Sufficiently Remarkable.  Thank you for joining us Maki!

Thanks James! Glad to be here.

For those who haven’t watched the finale of Stripsearch, would you care to give us a rundown of Sufficiently Remarkable?

Sufficiently Remarkable is a story and character driven comic set in Brooklyn, NY. It follows the lives of two young, post-collegiate women who are trying to get a grip on life. Or at least one of them is, anyway.
Riti is smart, cautious, analytical, and at the start of the story has found herself fallen to the classic New York artist trope: She works a retail job and is just trying to be noticed. Very familiar to many young artists, I’m sure. Meanwhile, her roommate Meg idly saunters through life, jobless and just trying to keep herself amused.
It's a comedic look just how complicated life can be, made ever more complicated by the scheming Anton and dopey Rich. Not to mention a host of oddball characters. 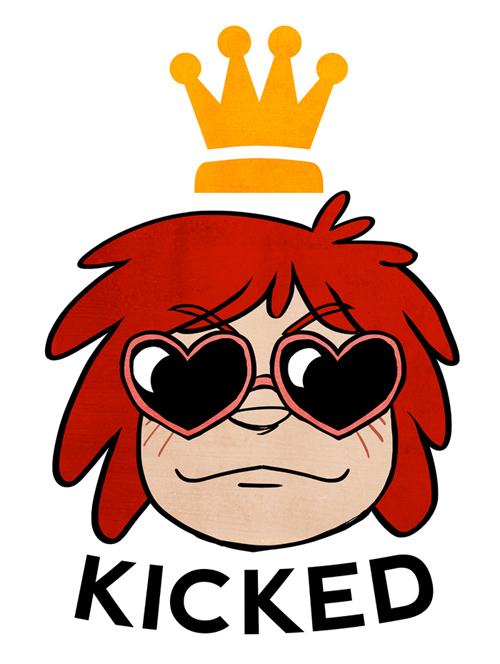 Well your project obviously has some fans as you’ve already reached your goal of $10,000 in what?  Six hours?!  How surprised are you that you hit the goal that fast?  Do you credit your time on Stripsearch with your success?

I’m a horrible person. Maybe carefully horrible. I had some apprehension originally because my comic was probably the least well-received by fans when the final Strip Search episodes aired. So while I knew for certain I wouldn’t fund in 20 minutes like Abby did, I was pleasantly surprised that it funded as fast as it did. Eternally thankful to all my backers, as well as those who chided me.


Is it just a personal interest in science that makes you toss all the fun science stuff into your comics like your current one Sci-ence? Or do you have a professional background in the sciences?

Purely personal interest. I grew up chasing bugs and lifting up every stone I could find. The retaining wall at my childhood home was a disaster. Sorry Mom and Dad.

While I maintained a passing fascination with science and technology, it largely gave way to art until around 2006, when various science podcasts rekindled my interest in it. I started Sci-ence in December 2010, and have been enjoying overturning all the rocks again. 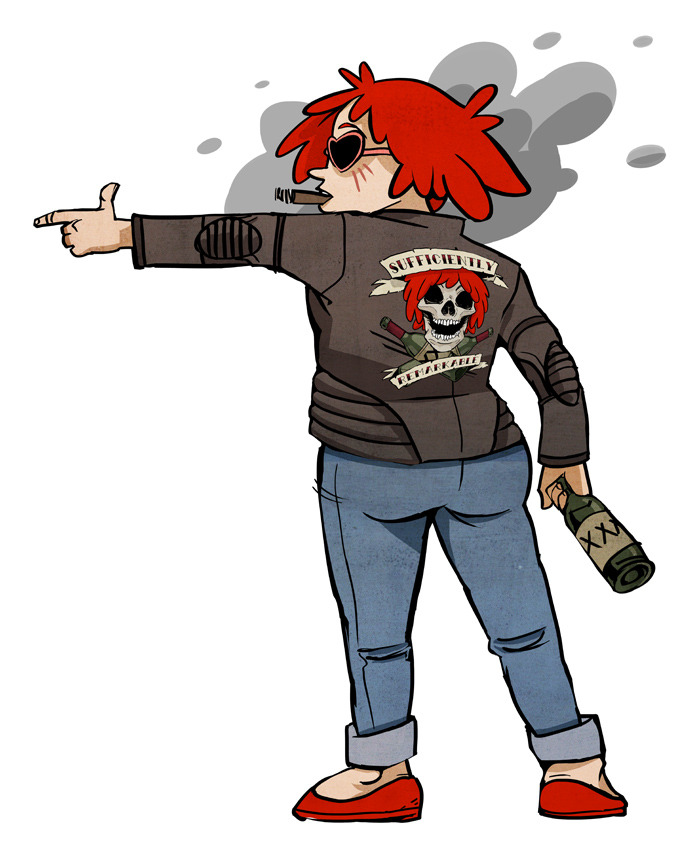 Are you planning on Sufficiently Remarkable to have a running narrative or will it mostly be stand alone shorts?

I think a little of both. It will have its story arcs, but if anything, I have never been able to stick to one format for long. One off jokes will occur to me, and I’ll throw them in as I see fit.

And of course there will be the flashback vignettes and one off stories about side characters.

Are you planning on any more projectile vomiting in the comic?  Any hints at the crazy science related shenanigans you have in store for SR in the future?

You know, there was a toss-up (ha ha) for a long time between the fulmar and vultures—who will throw up to deter predators—for that comic. I felt comparing Meg to a vulture was just too much, and I went with the seabird.

I love animals, so I think we can expect lots of instances where I compare something that happens in the wild to something we do as humans. Projectile vomit is a bit extreme, but I hope to play with the notion that humans are different, special, and above the rest of the animal kingdom. In reality, we’re closer than most like to admit.

As a long time observer of Kickstarter rewards who has seen some pretty crazy one’s (jumping off a proto-space elevator ranks up there) your reward levels are very... Maki to put it simply.  In fact the one that seems to have caught the most attention, including mine, has to be your $700 “Dear John” letter level.  What made you think of that one?

My buddy and Sci-ence compatriot Nadir suggested it, actually. He may have been joking. But I’m deadly serious.

Funnily enough, that may or may not be a secret stretch goal. (And depending on when this goes up, it might already be fulfilled). Lets see if your generosity can warm my heart. 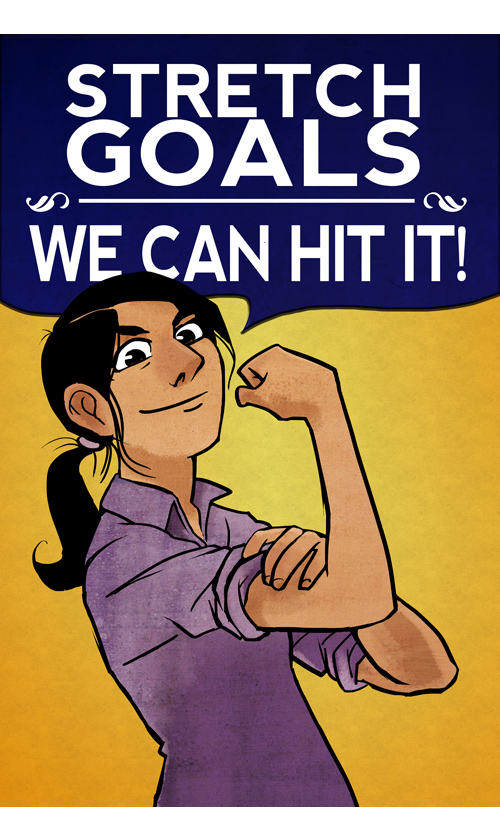 So now that you’ve hit your goal you’ve posted your stretch goals and I must say as someone who worked on the Mars rover projects (MER1 and 2 or Spirit and Opportunity to most folks) I’m looking forward to you doing the “Don of Mars” project.  How will the Mini series comics Don of Mars and Crowlmes and Flockson be delivered?  Will they just show up on the SR site?  The Sci-ence site?  Or will they only be delivered to backers of a certain level?

They will be available for all to enjoy. As far as where they’ll appear, I think it’s safe to assume they will have a home on the new website.

That’s awesome to hear you were involved with those projects. Have you been keeping up with Sci-ence’s Mars saga? I recently had a conversation with Mars500 “astronaut” Diego Urbina about his experience simulating a round trip journey to Mars.

I’m actually going through the archive so I’m looking forward to reaching that segment! When I talked to Abby she too mentioned she didn’t get the Stripsearch tattoo and put it down as a stretch goal.  Are you planning on just getting the 3 blank panel version or do you have a punchline planned for yours?

I kind of like the punchline version, actually. Originally, I wanted the 3 blank rectangles for their simplicity, but there’s something special about that final speech bubble.

I’ve been really reluctant to get it, though. I don’t have any tattoos currently because I’d want to design themselves and then a year down the line, I’ll hate it. I’m also deathly afraid of the tattoo artist messing up. Haha

Speaking of Abby, I have one question she wanted to ask you:
"Hey Maki why does your face look dumb like it needs to get punched?”
Yeah, not sure why she asked that...

What? This unchecked aggression will not stand! Just you wait. If you think my face looks dumb now, wait’ll I reach 100K and all my hair gets shaved off. Then you’ll see my dumb face, and I’ll see your dumbfounded face as I somehow manage to scrabble together that much cash in the 11th hour. 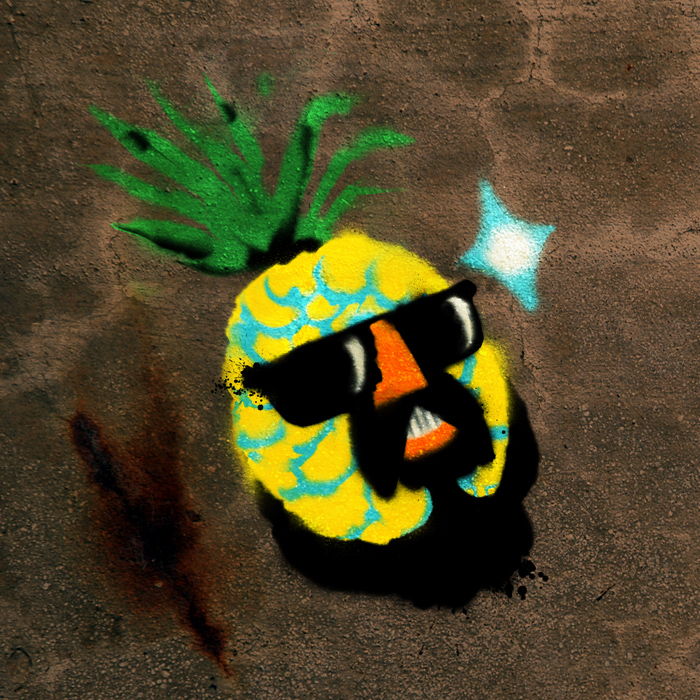 Do you think the pineapple thing will ever go away or is it a permanent part of your mystique now?

As long as people remember Strip Search, I imagine Pineapple Maki will live on. Whether I perpetuate it is another issue ;)

You seriously put “THE BEARD” on the stretch goal list?  What possessed you to do that?

Honestly, I thought the world was a cruel, devilish place, and that people would delight in seeing me de-bearded. I still think that way, but clearly they like my beard enough to recoil in horror at the thought of seeing it go. 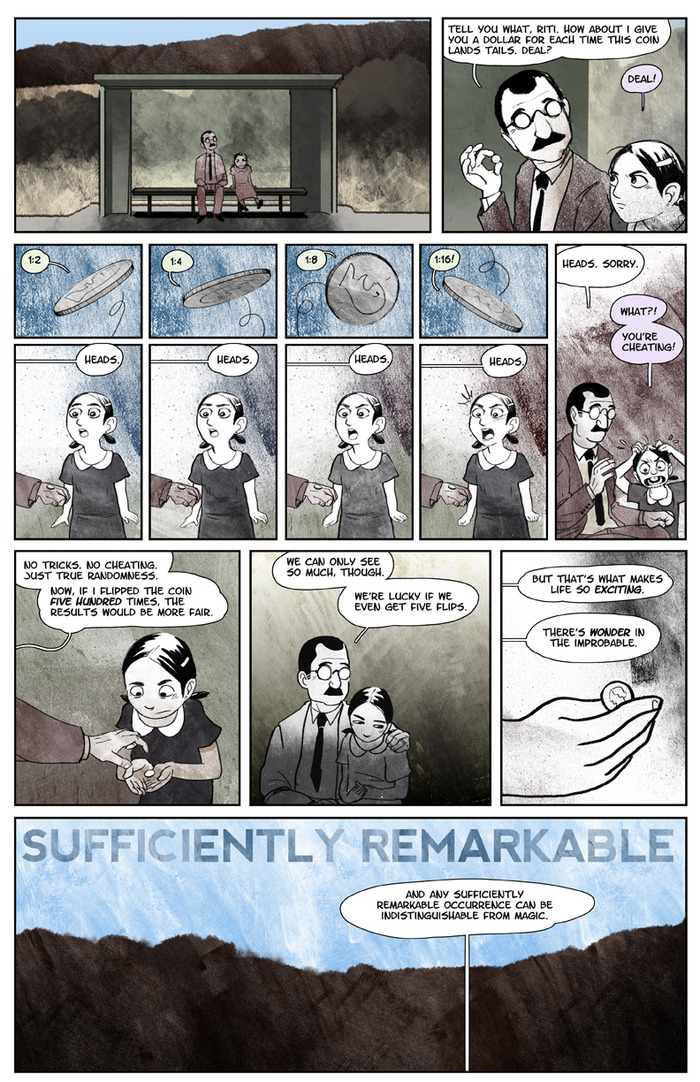 I don’t even remember. Hasn’t it always been here?

My video for sure. I figure, if I can make them laugh, I can make them back. Other than that, I tried to keep it very rich in imagery and humor. I’ve been trying to anticipate what people want in a reward, while still putting my foot down on the monetary value of each tier.

At the moment, I’m in the process of designing some of the rewards in order to better entice latecomers.

I took a look at Kicktraq. Gary Tyrell from Fleen sent me a link pretty early on. It’s estimation was... optimistic. I mean really optimistic. I laughed at it. Other than that, I put the video on Youtube with a link and have been active on social media. At the time of writing this, my greatest challenge is keeping the momentum going, so I’m hoping some outlets pick up on it.

As always, my friends and colleagues have been incredibly supportive in providing signal boosts for the project.

Plan it well, don’t put your physical, mailable rewards too low, and budget, budget, budget. I advise against jumping in before you’ve tested the water. Definitely look at what other successful Kickstarters are doing.

And by all means, don’t be afraid to ask for help. 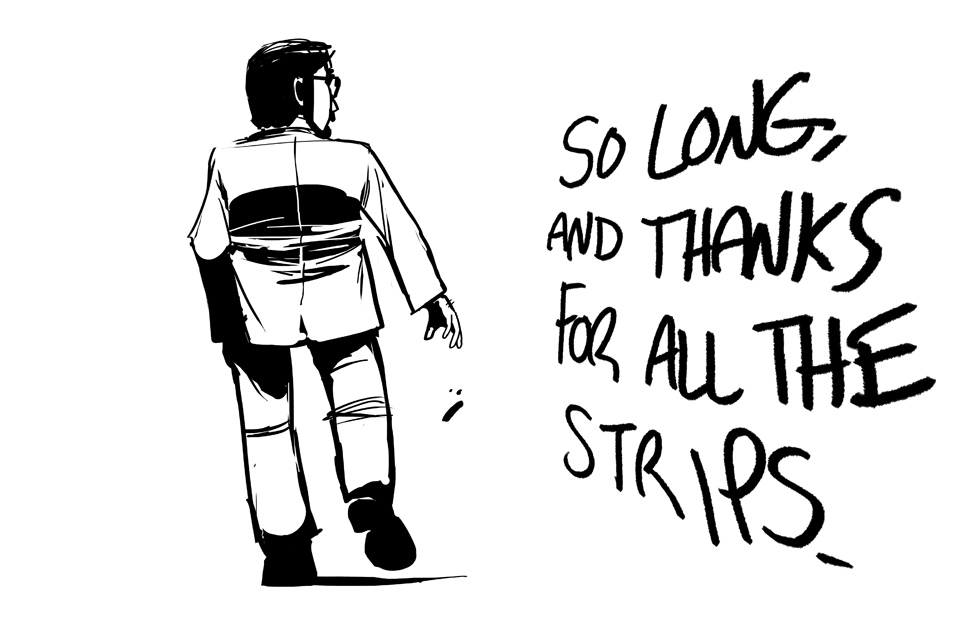 Sufficiently Remarkable might be funded, but let’s not stop there. The stretch goals are a great chance to fund other comic projects, special productions, more videos, and extra rewards for backers! And hey, do you have an idea for a stretch goal? Send it on over and if I like it, I’ll see if I can fit it in somewhere.