Welcome back to another Kickstarter Conversation!  Today I am joined by Writer/Designer N "Nick" PFEIFER who is here to talk to us about his graphic novel project:  MANEATER.   Thank you for joining us today N!

Thank you for having me!

The name “MANEATER” makes perfect sense after I read the story summary, would you care to share the basic plotline of your graphic novel?

Sure! So in a nebulous period we call “The Future”, a femme fatale named Deity Marvelous is running amok in the city of Metropolis One. Through her connections, she’s trying to build a virus that will destroy every human male on the planet. To stop her, the Metropolis One Police Department has enlisted a gifted young woman, perhaps to ‘fight fire with fire’ but to investigate and take down this strange new enemy in the relatively crime-free future. As the series progresses, we learn how much of a danger the virus becomes and how much either side is willing to go to accomplish their goals. 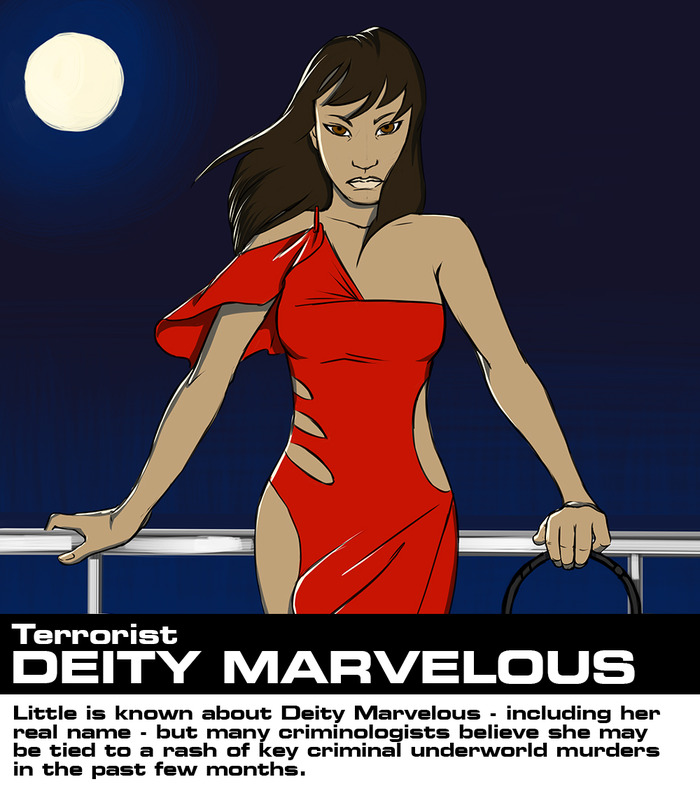 Killing all the men on the planet seems a bit overkill doesn’t it?  What’s Deity’s motivation to do so?  It sounds like you’re trying to stay away from a traditional two dimensional “evil bad gal” routine.

Deity has a very interesting back story, which would probably spoil the surprise, but I will say that she does have it out for mankind and has some overarching reasons why she’s going to such extremes to create her own version of the future. I think you’re spot on when you say we’re trying to shy away from the traditional “evil bad gal” routine because I don’t think few are willing to make complex female characters, probably because most of this fiction is usually written by guys. Ha! When a female villain is done right, you get some of the most powerful in fiction - think System Shock’s SHODAN - but I think few are willing to try. Deity isn’t afraid to use her beauty to get what she wants, but there’s something so fun about building her up as a villain.


What made you decide to go for a graphic novel and not a webcomic?

Funny you should mention webcomics because they’re the form of comics I’m most familiar with, going back to 1999 when I started reading Penny Arcade. The reason we’re going with a stand-alone project that hinges on a tight arc actually goes back to how I experienced science-fiction growing up. Star Trek: The Next Generation was a cornerstone of my youth and Captain Picard was a role model to a kid like me, but it wasn’t until Babylon 5 aired that I realized the value in developing a story first and letting it reach a natural conclusion rather than developing it on an episode-to-episode basis. Even if TNG had more episodes than Babylon 5, the events and characters had more importance in the latter because they weren’t made up as they went along. Ditto for Ron Moore’s Battlestar Galactica.

I think, for the most part, fiction should have a beginning and an end, rather than being a rambling cash-in on familiar faces. I wanted MANEATER to have that across five special-built issues that reach a conclusion, rather than as a webcomic, which I think people expect to continue on and on until the lack of ideas kinda kill the quality. 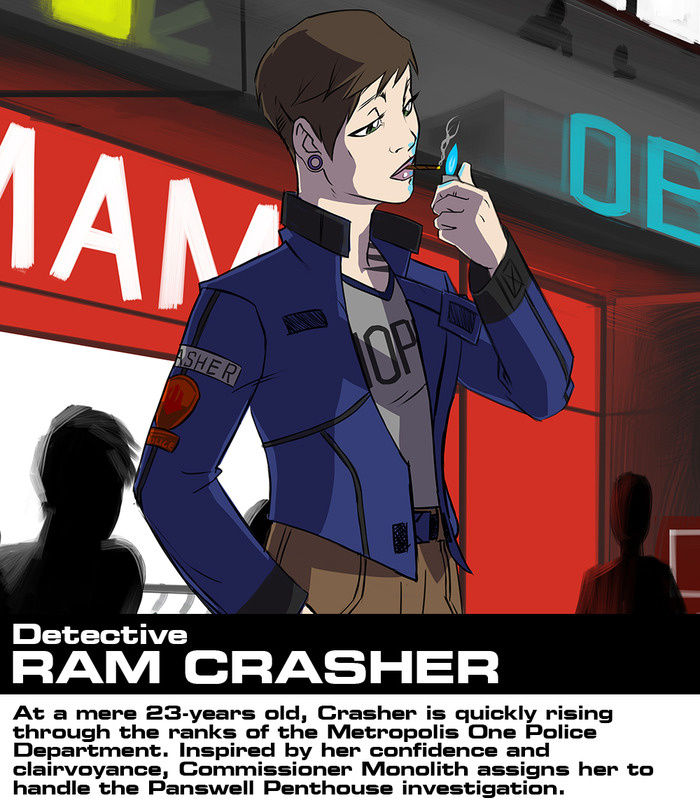 What were some of your inspirations for this story?  The art direction?

The story’s taken a lot of forms over the years. When I dropped out of art school in 2003, I set out to make an animation called “Off-Duty” that featured a cop about to get off for the evening when he spots a car stolen by a robot race down the street at insane speeds in the pelting rain. He takes him down in a fiery explosion on the freeway and the police crews designed to handle cleanup take over. Later, the robot shows up and nearly kills him when he’s having a cup of coffee at a Blade Runner-style cafe, but winds up blinded when he aims the gun’s laser scope at the cop’s police badge, allowing the cop to take him out.

From that, the story began to accumulate and change, inspired largely by music I listened to and games like System Shock. As I mentioned on a recent radio show, the thrust of the story actually came from a final line in Nelly Furtado’s “Maneater”, in which she and Timbaland have this call-and-receive section (“Been around the world/I ain’t ever seen a girl like that”/”She’s a maneater...maneater...”) which actually shaped the conclusion of MANEATER’s arc, so I can’t give away!.

As far as the art direction goes, that’s largely Cody’s realm. I dream of a more colorful version of an otherwise dark and dreary universe that’s made so much contemporary science-fiction looks so boring. As fatigued as I am of Halo as a series of games, I really enjoy their infusion of colors, something that hasn’t quite shaken off on the industry.


What previous experience are you pulling on to bring this project to fruition?

Back in 2001, I made a Flash cartoon called “Zero Wing” and it felt like the accumulation of everything that I could do on my own, which is why I never really followed up. In the meantime, I’ve built up my design chops,  written a book and dreamt of what the next big steps could be, but I realized I could only accomplish so much. With Cody on full-time making this, it feels like the end result of a decade of stories I haven’t been able to tell and ideas I haven’t been able to express. Reactions to the pitch have ranged from intrigued to positive and I think that highlights a lot of refinement in being able to pick and choose what works well in my head before exposing it to air. For this project, my work is in the bookends: making sure Cody knows what he’s applying his beautiful art to and then polishing it up on the back end for tone and to fit a particular look, something I couldn’t have done in those Zero Wing days. 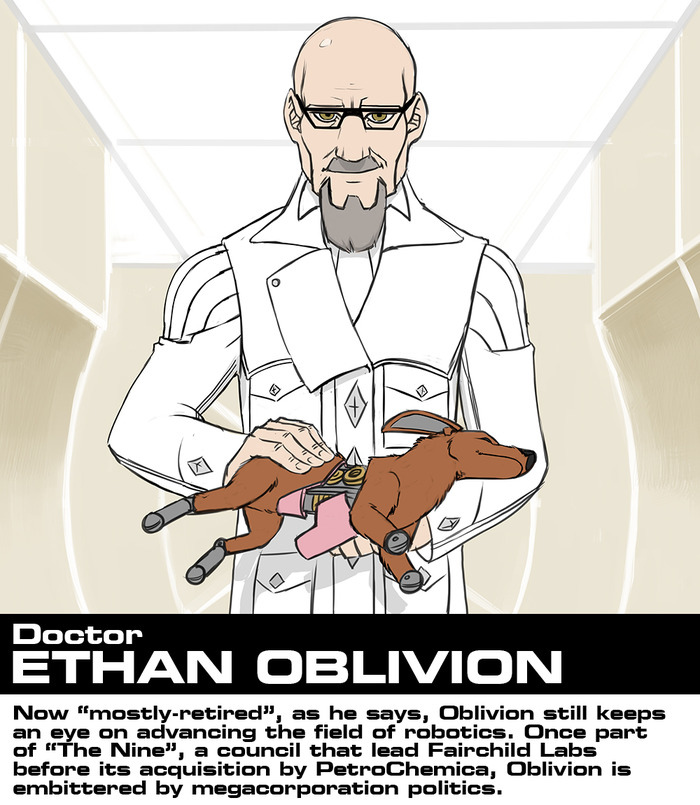 How difficult is it to try and differentiate your work in this media rich world we live in?  What are you doing to make people go, “I gotta read Maneater!”

It’s incredibly difficult! Science-fiction and fantasy are two very broad archetypes that have been mined for content for the past century and beyond.

When you learn animation or acting, you’re taught early on that you need to exaggerate your motions and emotes. You can’t make subtle gestures or have flat vocal expressions because it doesn’t work. You can’t keep people at attention when you’re creating something as if it were being recorded in real-life because real-life is boring. The same thing happens when you deliver a speech: you need to over-enunciate your words or the message is lost in the speaker system.

MANEATER is designed to stand out for that very reason. There’s a lot of science-fiction out there. There are a lot of Blade Runner knock offs and short of being completely cheesy in a Flash Gordon type of way, I wanted there to be a hook from the outset. It’s why you have a Doctor Oblivion. It’s why you have a virus that’s designed to consume men at the cellular levels. It’s why the leads are strong females. If you’re not bringing something new and exciting to the table, especially when you’re asking for people for money to make it, then what are you doing?

If you bumped into a big time comic publisher in an elevator how would you try and sell MANEATER to him?  Give us your best “elevator pitch” as it were.

MANEATER is a comic from people who don’t make comics. A woman named Deity Marvelous wants to kill every man on the planet. It’s as if it were pulled straight from the 80s. It’s sexy, it’s violent and it’s something you’ve never seen before.

I can’t remember the exact moment, but it didn’t take much to sell me. Some friends and I had tried something similar in 2006 when we tried to raise money via donations to film an E3 documentary from the perspective of some regular gamers who drove from Colorado to Los Angeles to experience the expo of their dreams. It didn’t work out, but Kickstarter is the perfect place for that kind of project to live and possibly get funded.

First project I funded was Indie Game: The Movie and I was hesitant to back anything else until I finally got my Steam code for it and I wound up loving it, so I’ve backed a lot more projects since. 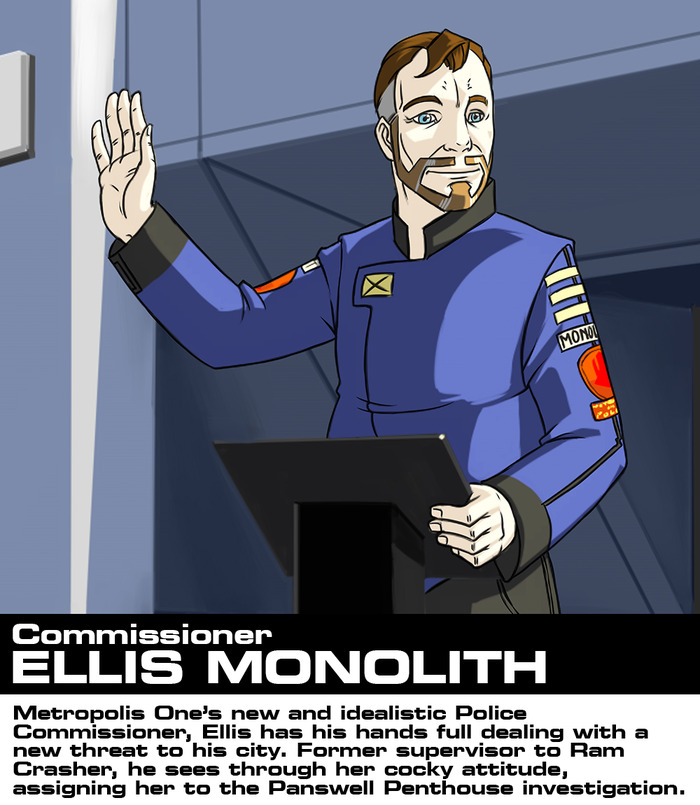 Right now I’ve been using updates to fill in some of the back story and discuss the influences on the story. I’d love to get more in-depth in that regard and see if Cody would pitch in more content as he’s available -- he’s a busy man, which kinda necessitated the Kickstarter to keep him on this project full-time. I’m very open to seeing what people want to see out of the project and answering questions they may have about the story; well, as much as I can!

Cody (@Orzene) and I (@TerranCEO) already have a presence on Twitter and we regularly update our Facebook page (facebook.com/maneatercomic), when I’m not writing for my day job at FleshEatingZipper, I’m pinging a variety of outlets to tell them about our story. Since I’ve covered a variety of Kickstarters over the years, I’ve been a huge fan of Kicktraq along the way, so I rely on that often.

The fact of the matter is that unless you have an existing fanbase, pulling one of these off is much more difficult because you don’t have people front-loading the funding. Look at many of the successful Kickstarter comic or gaming projects out there, like the Strip Search contestants who’ve made their campaigns in the wake of their post-show success: they hit their funding goals in a day. You’re trying to get the word out, but so many outlets are tired of hearing about Kickstarters, so when you have a small base, I mean, how do you progress? There’s something psychologically pleasing about funding a project that’s already set, rather than one that’s still trying to find an audience, but we stand by our creation through to the end, we just hope to have that magical moment where MANEATER can reach a lot of people at once and I thank you again for having us!

Oh absolutely. Honestly, just getting eyes on the campaign is huge. We think this is an incredible story, we’ve had a lot of positive feedback , but I think there’s some hesitation because, again, we’re kind coming from nowhere. The more we can get our campaign out there - and the more you can get yours out there, the better you’ll do, so start doing stuff now and make sure your pitch is special!