Buff the Vampire Slayer mixed with Doctor Who and you get Tart! Demon-Ass-Kicking-Time-Traveling Heroine!


Welcome back to another Kickstarter Conversation!  Today I’m joined by artist Kevin Joseph who is here to talk about his comic: Tart.  Thank you for joining us today Kevin!

Absolutely. Thanks for letting me share my book with your people!

Your project’s tagline is, “Buffy meets Doctor Who meets Sandman.”  Could you go into more detail about your project because honestly that tagline just demands finding out more.
Thank God! We were praying that would be the case.
We feel Tart is really it’s own story, but when you’ve got 10 seconds to grab somebody, you’ve got to boil it down to it’s most compelling parts. In doing that, we felt we should spotlight the most glaring influences that went into its genisis.
1st and foremost: Buffy. When you’ve got a teenage girl hunting demons, you’re going to be told you’re like Buffy. When you as a writer absolutely adored Buffy and idolise Joss Whedon, you say screw it and shout it out yourself.
Next would probably be Dr. Who for the time traveling element. Though this influence comes from the artist and cocreator Ludovic Salle, as I have yet to watch it. I’ve always been too intimidated on about where to start. And now that I’m writing Tart, I’ve decided to hold it as a reward for finishing (and to protect me from unintentionally stealing).
And finally Sandman, because it more than any other series taught me what you could do with a comic book. And because there might only be one writer I idolize more than Joss Whedon, and that would be Neil Gaiman. 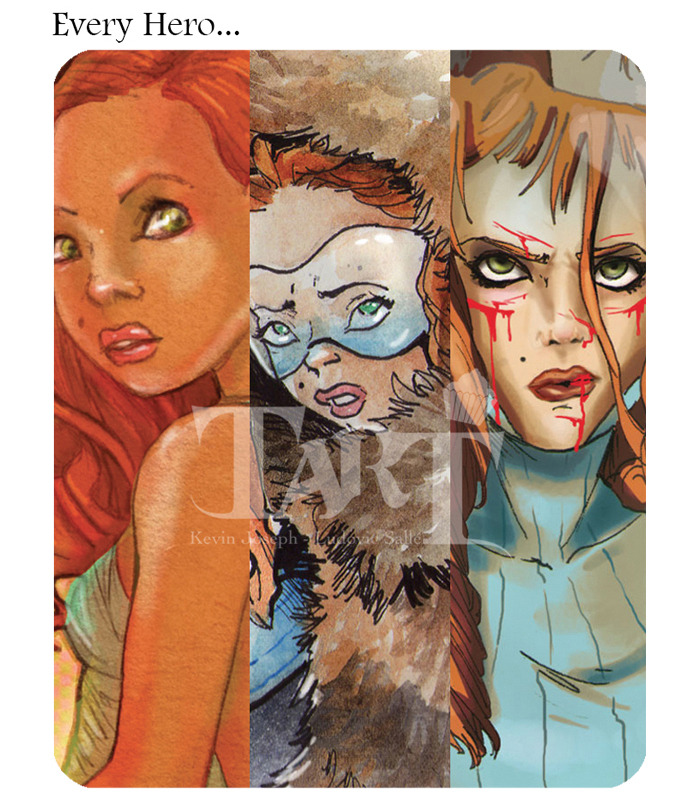 How does someone become a demon-ass kicking time traveler?
Oh, sorry. You’re going to have to learn that when Tart tells you. I can’t give away all of her secrets.


The Kickstarter will be funding the printing of Volume 1 which contains three chapters in Tart’s story correct?  How many chapters are planned?
At this time Tart’s story is planned to span somewhere in the vicinity of 40 issues. I’ve joked that I’m going to try make it end on issue 42 even if we have to make that issue 156 pages because I didn’t organize it quite right. 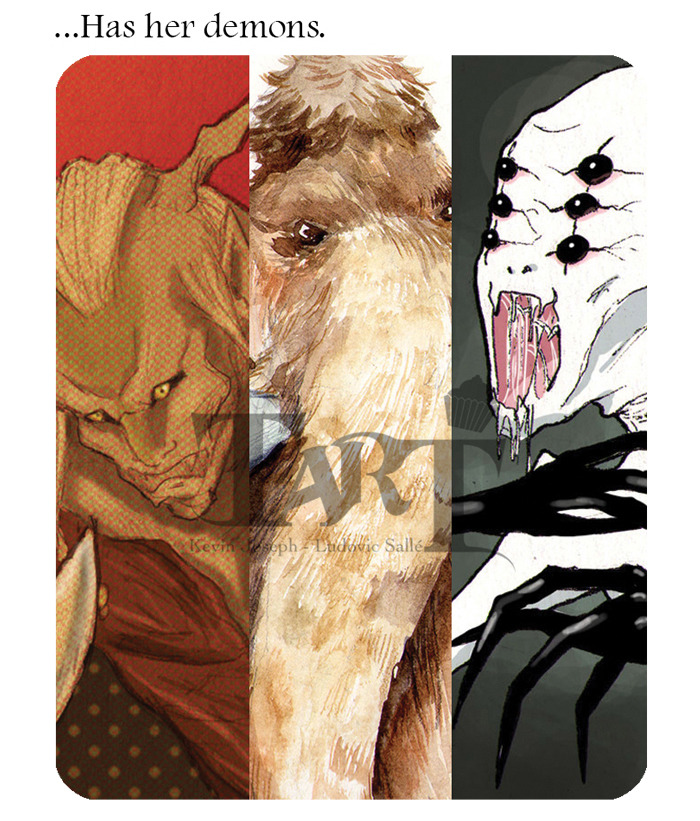 Since you’ve already reached your goal you’re going to be in good shape for New York Comic con it seems.  How excited are you to get your project out into the public’s hands?
We’re ecstatic. We’ve gotten such great response from the people who’ve gotten to read it that we’re just hoping to get it into more and more and more people’s hands.
That’s why we promised the digital comics even if we hadn’t made our goal. We really needed the funding in order to return from New York without mountains of debt looming over every decision we made.
Having never tried a Kickstarter, and let’s face it, being pretty much unknown on the comic scene, we didn’t know what the public’s reaction to our campaign would be. Therefore we guaranteed that anyone pledging would get the digital comics even if we missed our goal. In all honesty, if we had missed our goal, but gotten 100 new readers, that would have been a solid single for us. Making our goal, getting 120 new backers and counting, we feel like we’ve hit a triple.
There’s still a couple days to hit a homerun.
Your $2 pledge level intrigues me as it offers access to a web version of the comic.  What are the plans for this site in the future?  Will the whole comic become a webcomic as well as a print one?
This goes along with the goal of building readers. We really feel we have a very good book and if we can get you to read it you’ll want to own it. So we’re very willing to put it out in every format we can at multiple price points so the reader can choose how they want Tart. Including Comixology, which we’re pumped to announce we’ve just been accepted onto. 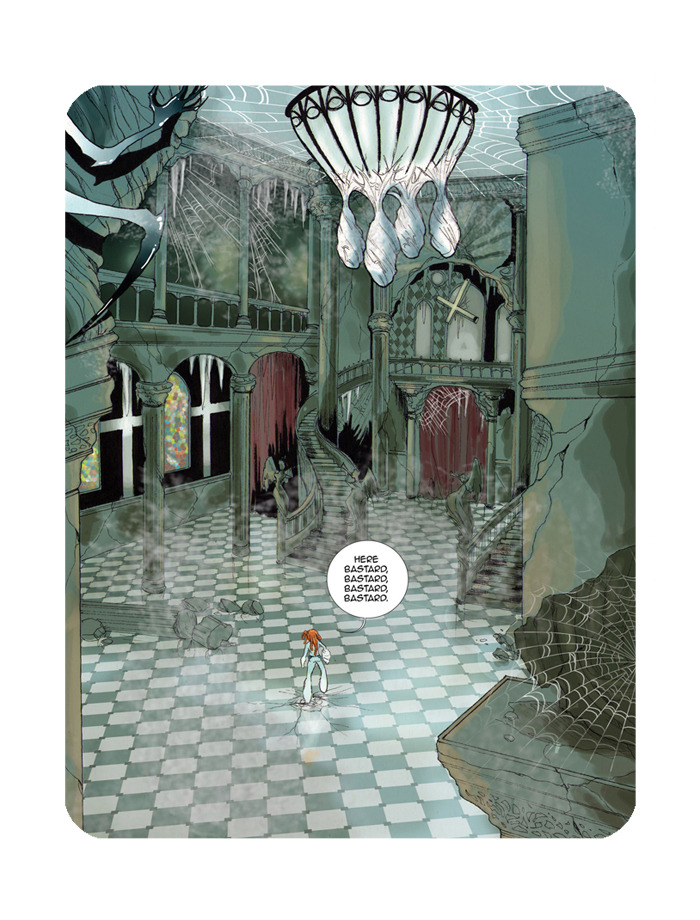 I noticed that every era seems to have a different art style associated with it. How many artists do you have drawing this comic and how many art styles do you have in mind?
There is only one artist on the series. Tart’s co-creator Ludovic Salle. He adjusts his style to every script I send. For instance issue 2 is almost completely painted in watercolor, the last page is drawn to get the scale of the Season’s Mansion (if you read it, you’ll understand what that means).
When Ludo received the script he felt that painting it would bring the feel of a frozen world to the audience, so that’s what he did. Ludo is an absolute machine, and I couldn’t be luckier than to have found him.
One of my biggest bugaboos for any Kickstarter project is the budget.  Being able to “show your work” as it were when it comes to planning out your Kickstarter goes a long way to reassuring potential backers that this is a serious project.  With that said, why don’t you have a budget breakdown for your project?   Where is the money going and have you earned enough to help pay for more than just printing/fulfillment yet?
Oops. Our bad. Kickstarter virgins. We honestly didn’t know that’s something we should have done.
The honest answer is the money is going first and foremost to the pay for the printing of the book. Any extra will help us pay down all the expense of exhibiting in New York.  NYCC fees, lodging, airfare (Ludo’s flying from France) food, shipping, decorations etc.
This is a hard question to answer, because I’m so, so appreciative for every single dollar that’s been pledged, and am still hoping to find more readers, and more funding, but we won’t be “in the black” unless the last week goes completely nuts for us.
But don’t cry for us Argentina. We were going to go to New York whether we made our goal or not, so every little bit of help is appreciated more than I can say.
How did you discover Kickstarter?

I’ve know of it since it began, but two huge campaigns really informed me of what’s possible. Amanda Palmers campaign for her recent album, and Jason Brubaker’s campaign for ReMind Vol 2. I truly got into their excitement as the numbers rolled in and put it in the back of my head as something I’d like to try someday. 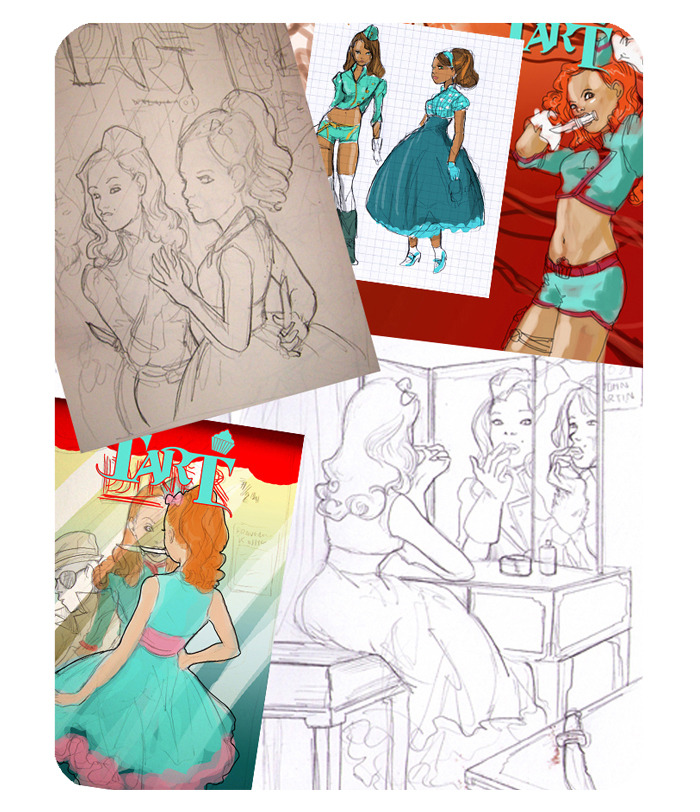 A key part of successful Kickstarters is backer participation and how to convert a potential backer into a full backer.   How are you engaging your backers?  What kinds of things do you have planned for updates to give notice to those who just hit the “remind me” button and surf on?  Interviews?  Videos?  Stories from the project?
This is where I’m probably not the best campaigner. I’m doing the updates every two to three days to our backers. Letting them know where we are and what stretch goal we’re shooting for. I’m trying not to spam their emails however. Others might be better at this than me.
Other than that, talking to anyone who’ll have me (thank you so much!), be that websites, podcasts, coworkers anybody. Letting them know we’re out there and that the video is only 47 seconds so checking us out and seeing if Tart intrigues you won’t even take 2 minutes out of your day.
What kind of media attention have you received with your project?  How are you spreading the word?  Facebook?  Twitter?  Google+? Youtube?  Advertising?  Are you using Kicktraq to track your progress?
We’re focusing most of our attention on Twitter and Facebook. And that’s literally because it’s where we’ve been able to build a supportive community. I should do a better job learning about Google+, reddit etc, but I simply am too ignorant of how they work to jump into them now. For instance on the ignorant front, what’s Kicktraq (I really wish that was a joke)?
Do you have any tips/advice would you give to anyone looking to start a Kickstarter?
Get your business situated long before you want to run your campaign. We’d actually hoped for our campaign to run in the month of August, but incorporating and proving to Amazon Payment that we were who we said we were cost us almost three weeks.
I’m not complaining, I appreciate that Kickstarter forces you to do it right, but we really almost missed the opportunity for the campaign because we didn’t have our ducks in a row early.
I also think that at least in the comics category you’ve got to let your art tell your story. Ludovic put together a beautiful representation of our book that evokes the feel of what we’re doing better than I could ever have summarized with words. 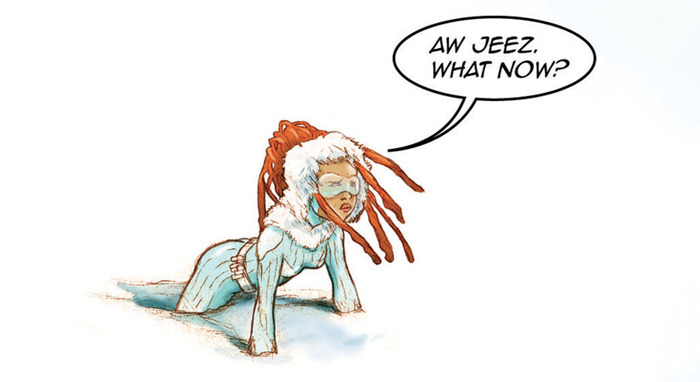 If you’re reading this, I assume you’re very much involved in Kickstarting projects. Even if you don’t back Tart, heck even if you don’t check out our page (but why wouldn’t you, did I mention the video is only 47 seconds long?) thank you!

I can’t stress how amazing it is as an indie creator to have people you don’t even know extending themselves to help you make your project. And then when they start to believe, and become a part of it, you just can’t beat that feeling.