Night Stars: Staring at the World Through my Rearview


Welcome back to another Kickstarter Conversation!  Today I am joined by the creator of Night Stars: Staring at the World Through my Rearview, Tim Lattie!  Thank you for joining us today Tim.

Thank you for having me James.

You have a pretty sharp looking comic project to show us today there Tim.  Would you care to tell us a bit about the plot and concept?

It’s the end of time! Our government is out of hand and brings the world to nuclear holocaust. Everyone and everything is lost in one day… except for 3 adolescents. While searching for a strange light they see in the woods one evening the kids find themselves taken aboard a spaceship. Once aboard the ship they receive mysterious "living" space suits that morph onto their bodies and make them look like the classic Aliens of pop culture, with green skin and oversized head and eyes. Without warning the ship takes off with the kids still aboard, taking them back in time 66 years in the past to Roswell, New Mexico!
What follows is a play on the classic Roswell mythos, as the kids are mistaken for extra-terrestrials and hunted by a secret branch of the military. All the while each learning that within in them lays special abilities which only by unleashing will they be able to save themselves and all of history. So in a lot of ways it’s a coming of age story disguised as a sci-fi adventure, where our character s are growing up while going back in time.
Now after this where the story goes is almost limitless, as the kids jump through time and space interacting with some of history’s most notable characters and events making new allies and going on strange adventures. The choices they make literally affect the shape of the world as we know it today. But everything starts in Roswell, what happens there sets the tone for everything to follow. Their newfound power draws malicious plots from 3rd parties, who attempt to steal their technology and reform history to their benefit.  But ultimately, their biggest foe will be themselves, as they travel on a collision course towards the dawn of existence. They were there to witness the end of time will they last long enough to make it to see the beginning? 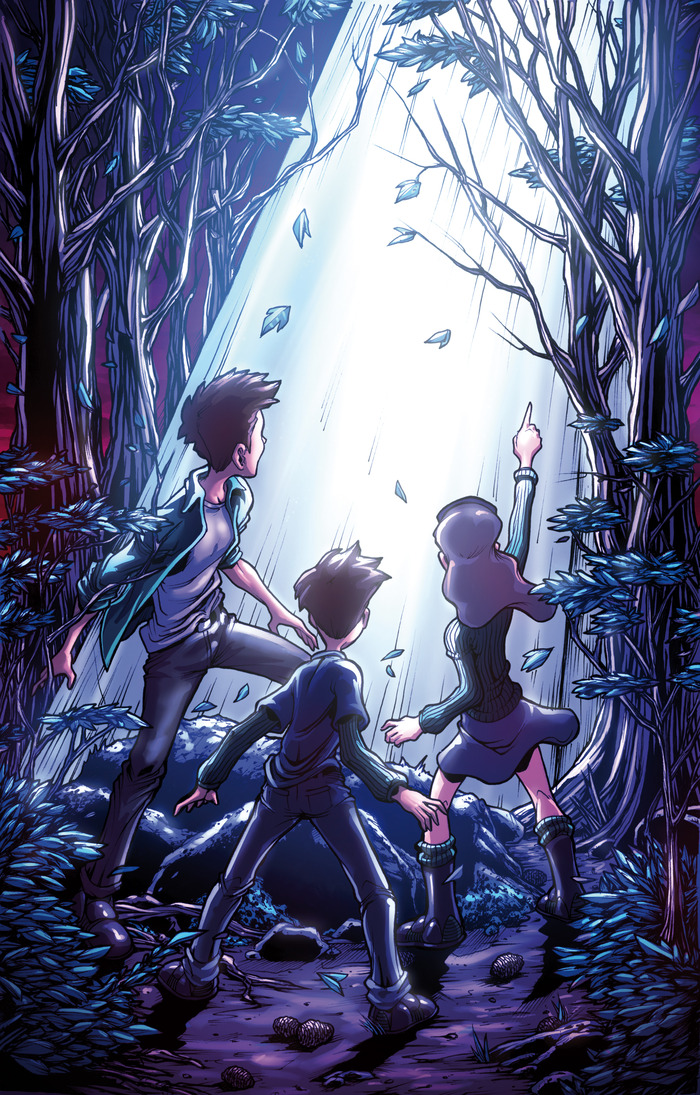 Why Kickstarter?  Your project looks like it could be a webcomic or an eBook you self publish rather easily.


Kickstarter seemed like a great opportunity to fund my project while retaining the rights to the property. Ape entertainment has already agreed to publish the book once everything’s done, so the website is being used for its namesake, to get things kick started.

So what is your background as a comic creator?  Are you a college trained artist?


I’ve been working in comics for a few years now mostly at Ape Entertainment. My first gig was on Return to Point Pleasant followed by some stories in Ape Entertainment’s Cartoonapalooza which led to a run on White Picket Fences. Before that I attended Savannah College of Art and Design (SCAD) majoring in sequential art and I was also very fortunate to attend an art high school here in New Orleans called NOCCA  (New Orleans Center for Creative Arts) where half the day we would have our general high school studies and then spend the other half working on our craft. So art and comics have been a part of my life for a long time now. 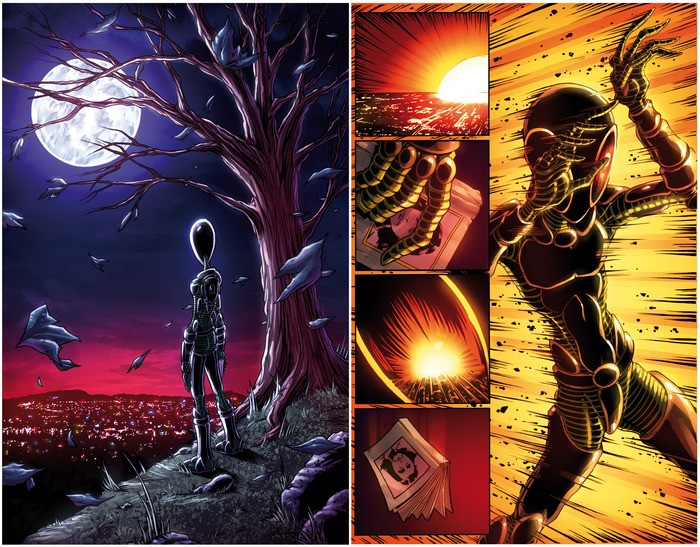 The book is going to be 32 pages full color, are you doing the Penciling, inks, and coloring all on your own?


Along with the writing chores, I’ll be doing the penciling and inking. Afterwards we’re going to have the amazing Diego Rodriguez, who i worked with on white picket fences, come in and handle the coloring.  So after seeing what he’s done with the cover and first 2 pages, I couldn't be more excited.

You are asking for $8,000 in this campaign, where is all the money going?


The money will go towards everything that goes into the production of making a comic book. The artwork, coloring, lettering, and the actual printing of the book using a paper stock above industry standard, creating a really high class product. The remainder will be used for the extras that come with the various packages the shipping and kickstarter fees.

What are your inspirations and influences as an artist and a comic creator?

I'm a huge Jack Kirby fan, I think the stuff he and people like Eisner did created that groundwork for everything that followed and some of their visual techniques are still used to today. But growing up in the 80’s and 90’s i was really influenced by Todd Mcfarlane, Jim Balent, Michael Turner, Tom Grummet  and Greg Capullo. I’d sit in class or at home and redraw there stuff in my notebooks. Then the influences started coming from outside of comics with artist like John Singer Sargent, J.C. Leyendecker and Gil Elvgren. 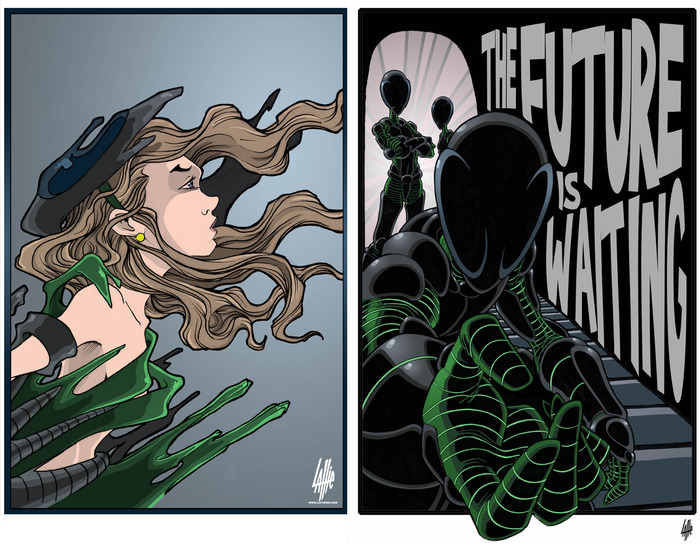 What is the idea behind the anime-like suit transformations?

It’s one of the main elements of the story, and used by our heroes, not only for defense and battle but disguise as well, morphing to match the attire of the time period they are in. Although the idea stems from one of my favorite shows Sailor Moon. I used to love how when they transformed it would be this big event on the show, so the goal was to capture some of that magic while paying homage to another one of my inspirations.

How did you discover Kickstarter?
I had been hearing about the site off and on for a couple years now. Then a buddy of mine, and amazing artist, Vernon Smith had a successful campaign with his comic book “Hide.” After that and some advice from other friends I decided to give it a shot.

I’m going to be doing that as well as through my facebook page.
That’s where I’ll be posting all the interviews and podcasts that I’ve been doing, keeping everyone updated. It’s also a great place to contact me and check out other cool stuff I’ve been working.

I’ve been keeping an eye on Kicktraq as well as Facebook, getting all my friends to share and help get the word out. As of right now we have the Superbowl and mardi gras going on down here in New Orleans, so I've got Posters all over the city, using that as an opportunity to get the word out along with the podcasts and interviews. 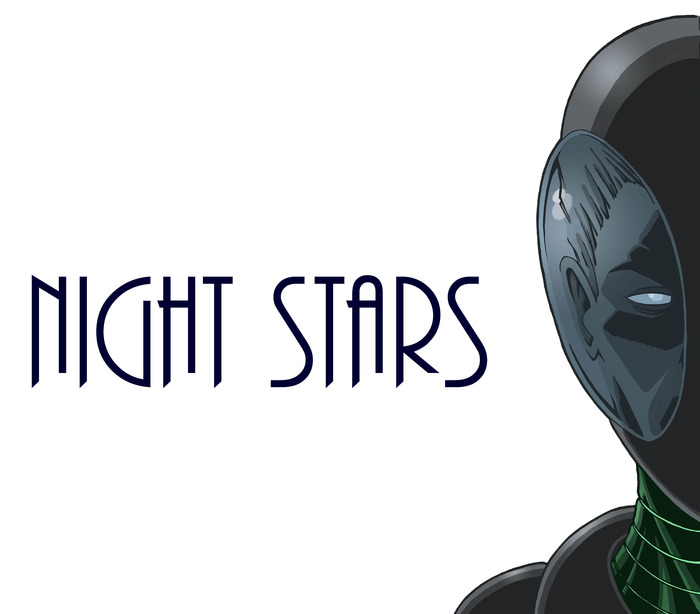 It’s like mickey from rocky movies says “you see yourself doing right and you do right,” so stay positive and put in your work.

That this is just the beginning. We have a really special product here that fans of sequential art are really going to appreciate for its creativity and depth of story. I'm extremely excited to get this franchise off the ground and thank everyone for their support.