Welcome back to another Kickstarter Conversation!  Today I am pleased to be joined by Colin Gilzean producer at KING Art Games who is here to talk to us about their latest project Battle Worlds: Kronos.  Thank you for joining us today Colin!
Thank you for having me.
First off let me start by applauding your team for making games for people like me.  Seriously first you make a great adventure game like the Book of Unwritten Tales but now you’re doing a turn-based-strategy-game?  With Hexes even?  Can you give us the rundown of the game?
We are, just like you, huge fans of the genre and grew up with games like Battle Isle and Panzer General and Advanced Wars. Nowadays there are only a handful of games in this genre, but most of them can barely compete with the experience from back then.
So we decide it is time for a new one and figured we’ll give it a shot. Of course we’ll continue to develop Point&Click Adventures, as we are working on  “The Raven”, but having so many dedicated and committed people, it was easy to decide to take on this challenge. 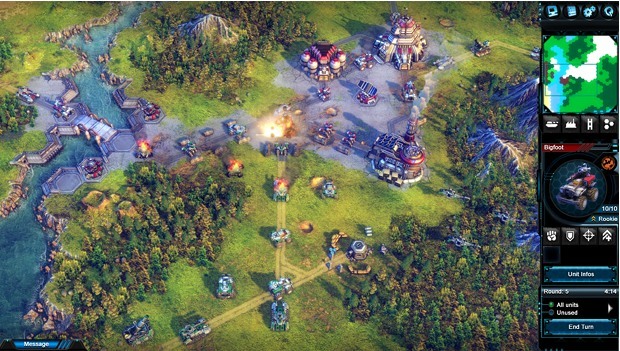 How did you guys end up making games in these “underserved” genres that many claimed were dead?
Simple; if we do something, we want to do it right! Our drive is not to develop for example the 10th best shooter game on the marker, but rather the best game in its genre. As we are still a growing studio we don’t have a budget like the big international ones. But this doesn’t mean we can’t create a great game, especially if all our hearts are involved.

Take a look at “BoUT”, back then there were so many people in the industry who claimed that there is no need for a good’ol Point&Click Adventure, but only because some people say that it doesn’t mean there is NO need. ;)
Looking at the screenshots and bullet points I could easily have imagined playing a game just like this in the 90’s.  You’ve even got a modern version of Play-by-email and hotseat?  No one does hotseat anymore! Is it hard to stay true to these “old school” style of design?
We aren’t fixed on an “old-school” style. We tested and analyzed several functionality experiences to figure out where we want to go with the Multiplayer. And those two were working perfect for what we trying to achieve.

We believe that especially the Play-by-email system will make the players happy. Think about this the next time one of your colleagues hulks-out with no obvious reason at his desk ;)

Play-by-Email makes it possible to play the game when-ever and where-ever you are.
Furthermore, as we are also looking into a potential mobile version, think about the possibilities you’ll have. This brings the multiplayer to a whole new level. 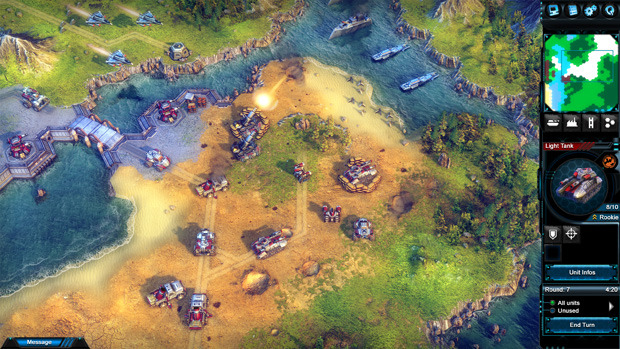 How much of the game is base building and resource gathering?  Or will it be more fixed unit counts?  Is it going to come down to a turn based tank rush?

Actually there is no base building and resource gathering will not happen in the conventional way like by harvesting  or so. Every map in the campaigns will have preset units and buildings as the focus should be at the battlefront.

Depending on the campaign maps the player will either start from a base or will have to conquer enemy buildings. Buildings gain resource points over time and with these resource points it will be possible to produce and/or repair units.

I dare you to try a tank rush tactic ;)

Oh just watch me try! You mention upgrading units.  Will we be upgrading individual units or will they be across the line upgrades?  Both?  Will units be repairable or is everything use and lose?

The units will be upgraded individually. Each unit type has in general 2 offensive and 2 defensive upgrade options, but only a maximum of 2 upgrades can be applied. The first upgrade will classify the unit as a veteran; the second upgrade as elite.
In general units can be repaired for resources in certain building and with a repair-unit.
In the second campaigns where you will command the „Residents“, with their Guerrilla tactics, you have a unique way to repair your units. Have a unit camp along the wreckage of an enemy wreck and your unit will take some parts of what’s left to repair itself. 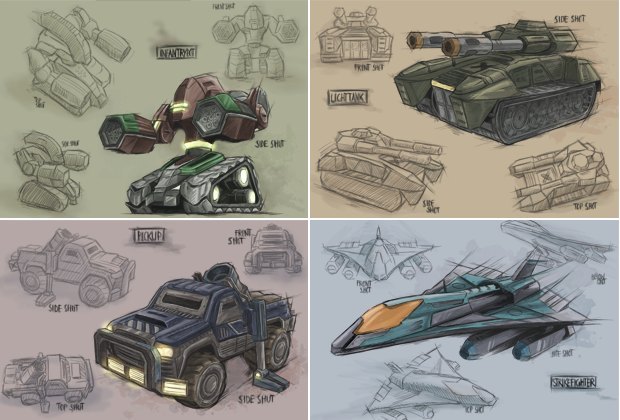 The video shows a cool zoom out feature reminiscent of Supreme Commander, how big are the maps going to be?

At this stage we can’t say for sure. Our tests are still ongoing, but theoretically there are bigger maps with more units than Supreme Commander possible.

Is the single player campaign a series of individual missions or a more Strategic map setup?  I do notice the “conquer the planet” is a stretch goal.

A map editor is included, any chance of a unit editor?  Or at least mod support so we could put custom models in game?

Currently there is only the map editor. Unit customization and mod support is something we might look into in the future, but at this stage it is too early to say.

You mention it will be DRM free, does that mean there will be no Steam version?  Or is it too early to tell?
We are looking into things to get our game on STEAM, GOG and other major platforms, but in the end the platforms are the ones deciding if they want our game in their portfolio.
The games will be generally DRM free, but in case the game get integrated on STEAM and someone decides to purchases it there he will most certainly be bound to the STEAM DRM. This is unfortunately not up to us.

Windows, Mac, Linux, and Browser?  Is that an HTML 5 version, Flash, Java, or Unity or some other system to play in a browser?
It is Unity3D and with the plug-in every supported browser will be able to run the multiplayer. Our team is already skilled with the Unity3D engine as we are using it also for our current adventure project “The Raven”, which will give us a huge advantage for BWK.

How did you discover Kickstarter?
Probably just like most gamers; through Doublefine’s Adventure project. We loved the idea behind Kickstarter straight away and instantly figured that Kickstarter is a huge chance for us too.

A recent Gamasutra article points to the results of the latest GDC attendee survey shows some 44% of those surveyed are planning to try crowdfunding in the near future.  Do you think crowdfunding in general and Kickstarter in particular is going to become more of the norm when it comes to game development?
We think Kickstarter is going to become more and more important, but the conventional way with investors / publisher will continue as well. Kickstarter in general is a great thing, as it gives people who come up with great ideas the chance to make it happen.

A key part of successful Kickstarters is backer participation and how to convert a potential backer into a full backer.   How are you engaging your backers?  What kinds of things do you have planned for updates to give notice to those who just hit the “remind me” button and surf on?  Interviews?  Videos?  Stories from the project?
Some of what we have planned you already mention.  As you may know, we already worked in 2007 on a BWK but unfortunately weren’t able to finish it. Back then we worked very closely and transparently with the community. We figured that this was a great inspiration and plan to do this again. We will provide our backers every 6 weeks with a new version of the game and then will do our best to transfer the feedback of the community into the game. Let’s see where this will lead us to! ;) 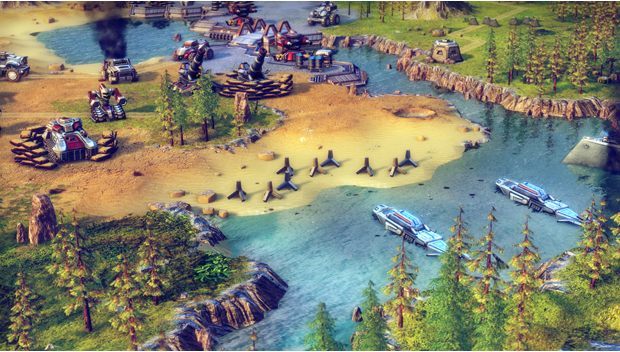 What kind of media attention have you received with your project?  How are you spreading the word?  Facebook?  Twitter?  Google+? Youtube?  Advertising?  Are you using Kicktraq to track your progress?
Our project is featured in several magazines and platforms like RockPaperShotgun. We update our campaigns page and, communicate in our and genre relevant forums, are building up a YouTube channel, and so on.

There are also quite a lot of Facebook pages like Say Mistage’s Tech-Gaming which promote our Kickstarter.

What makes us really happy is that people like Brian Fargo and Ken Levine tweeted about our project which resulted in a huge push. It feels pretty good to know that guys like them seem to believe in our project. The people of Obsidian are also supporting as well as they can.
Do you have any tips/advice would you give to anyone looking to start a Kickstarter?

If you aren’t a well known developer legend it is important to have a convincing video about your project, but just sharing the idea and talking about the potential of it isn’t enough. Even as an indie-developer you should show some playable eye-candy. We also recommend transparency toward your backers and to realistically plan your project. Keep in mind that you are asking for the help of others.
Thank you for spending your time with us!  Do you have any final thoughts for our readers?
We would like to thank everyone who is supporting us and hope that you’ll continue to look into other interesting Kickstarter-projects so that the future may bring more and more exciting projects from and with the people.