Welcome back to another Kickstarter Conversation!  Today I take a trip way south of the border to the Antarctic Press offices to talk with Joeming Dunn who is here to talk to us about their Indiegogo Project.  Thank you for joining us Joeming!

Thanks for letting me join your conversation.

After discovering Antarctic Press way back in 2000, and you guys being old even then, I’m surprised to see you on Indiegogo.  Would you mind telling us what this campaign is all about?  What are you raising the $3,000 for?

First off thanks for the support since 2000, it is nice to see such long standing fans. Antarctic Press has been publishing since 1984 and we have been successful in creating our small niche in the market. Over the past year and a half we took the significant step in trying to enter the larger book market which was in retrospect a mistake. While the financial awards for such a step are great there are also many risks, which while we tried to prepare ourselves for the risks they did prove to be overwhelming. We bit off more than we could chew and we ended up with some debts from a variety of different sources (mostly printing and returns). I take full responsibility for this situation. The campaign was asking for a bit of help from our fans. Help us pay off some of the debt to help us keep on going. While we do owe more, we asked for $3000 to help just one of the loans we incurred during this period of time. 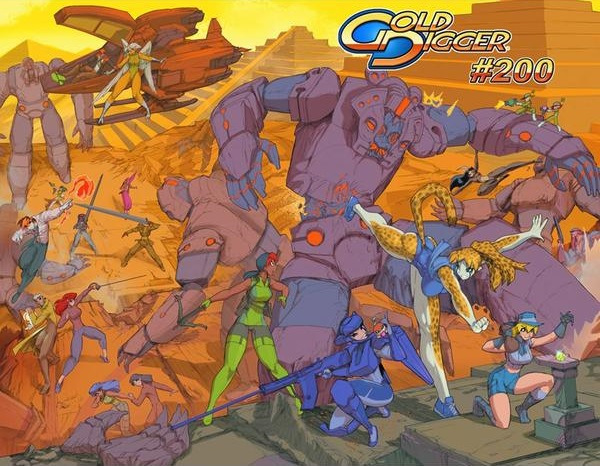 The campaign has exceeded our expectations and we are so grateful to the support. The extra money will go purely for debt payments, we did max out our line of credit and it was nice to be able to pay some of that down. We also were able to pay off the last bit of printer debt associated with our book market printing.

With such classic series like Gold Digger, Ninja High School, and Twilight X, why are all your backer rewards “random grabs” from your back catalogue and not say, a Twilight X only package, or a Rod Espinosa only collection?

That is such a good idea, I wished I had talked to you sooner. There are many “grab bags” in our campaign and we intend to contact all our supporters to ask them specifically for their preference of artist, series or titles so we will try to accommodate their choices. 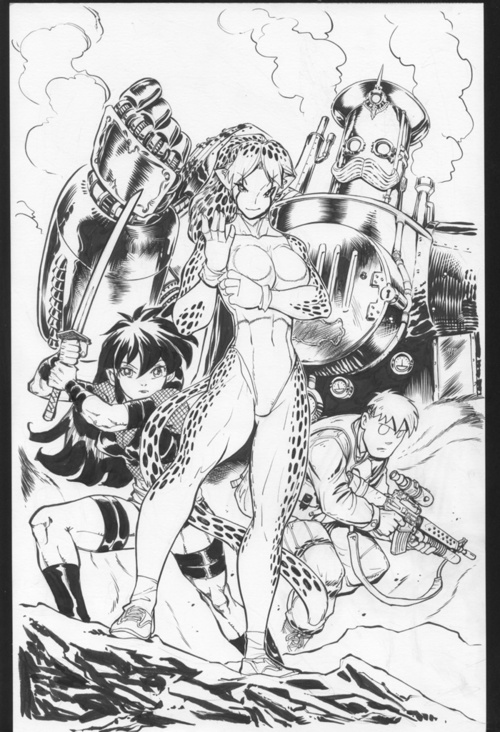 Your $1200 reward level says is for Ben Dunn to draw a backer written 8 page comic but it says it does not include Publishing rights.  In fact you even put “ask me why” in parentheses so I guess I’m asking.  Why can a backer pay for Ben to draw a comic but not have publishing rights for it?

Well that is just to protect us a bit, if we had someone ask for an eight page story which had Spiderman or Batman in it, we could get into trouble if someone tried to publish it. Also if someone had a controversial subject (like using images of religious icons or people or it was adult themed) that could cause difficulties. If it was a unique story, I do believe they could use the story for publication once it was determined it was unique.

As the sight name implies I focus mainly on Kickstarter projects, so I have to ask, why did you choose Indiegogo over Kickstarter?  Would Kickstarter not allow your project?

There are advantages of both Kickstarter and Indiegogo. One of the rules of Kickstarter is we are not allowed to sell items that have already been on sale, it has to be a unique and unreleased item while Indiegogo does not have that restriction. Also Indiegogo allows for payment even if the goal is not reached. We did not know what the response would be and we thought any help would be better than none.

I recently discovered you now have a Gold Digger online Library containing over twenty years of GD back catalogue.  As a purchaser of the old DVD archive a few years back I’m glad to see an online version, is there any chance of making digital archives of more of your series available?

It is funny you asked, in our last meeting we discussed expanding the online library. We are actually in the midst of trying to develop an app for our large library of material. We have not quite figured out the logistics for the digital archives but they are in the future.

Is there a way to buy AP comics in digital form?  Are you on Comixology?

We have a digital presence with Comixlogy and iVerse and have recently signed on with an overseas Asian company so soon in translated Asian markets.

Now that the campaign is winding down, what happens next?  What does the future of Antarctic Press look like?

While the comic book market is a very competitive and difficult market, there is a reason we have persisted for many years. We have a multitude of new projects we want to introduce in addition to continuing the books we currently publish. I am always optimistic about the future. There are so many new and talented creators out there who want to join a company like ours which are all for creator rights. While this situation has not been kind to us, it has made me feel good seeing my employees, artists and fans all come together to keep us going.

How did you discover Indiegogo?

I have been watching the crowd sourcing sites from afar for some time. They have been becoming more and more integrated into the comic industry for projects. I first heard of Indiegogo from a project by an artist named Lea Hernandez who did a book through Indiegogo.

Do you have any tips/advice would you give to anyone looking to start a crowdfunding campaign?

I believe crowdfunding is a great way to get a project off the ground. It is a difficult process as many campaigns fail. What I learned is the following. Look at all the successful campaigns and learn from their success, also look at the failed campaigns and see what they did wrong. Don’t rush into a campaign, think it out and talk to other people, places like this blog is a good start to learn about the ins and outs. Finally be realistic about your goals, do your research on what your costs will be and not try to reach for the stars. Not every campaign can be a $100,000 hit.

I appreciate that you are taking to time to talk about our campaign. It has been a tough last couple of months but just talking to you about all of this has re energized myself. Thanks to all your readers for taking the time to see me vent!


Thanks again and I hope to hear good things from your Indiegogo project!
Posted by Unknown at 3:29 PM