Welcome back to the Conversation!  Today I’m joined by Sam Oplinger who has come back to Kickstarter for the relaunch of his Last Starfleet cooperative board game.  Thank you for joining us today!

Hi there, thanks for having me.

The name “Last Starfleet” brings up images of wandering space ships containing the last remnants of humanity, was that the plan? Can you give us a quick overview of the game?

Right on target, yeah! In the distant future… players take up the helms of their very own starships, and together, form the Last Starfleet. You’re trying to establish a colony for humanity after you all learn that Earth has exploded! You have to choose what world you’ll try to populate from a meager selection. If we’d known of any ideal choices, there would already be another colony.

So, that’s the story. All the ships and planets are unique and you can change the story significantly by playing with a different combination of decks. It is super easy to pick up, but as you get used to playing, you’ll begin to see many more layers of complexity. The plot thickens! I’m very proud of what we did with that. 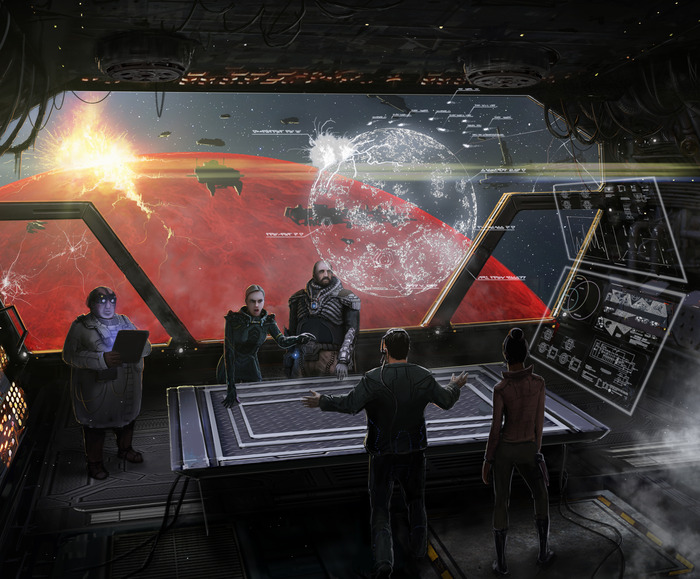 Is this a completely cooperative game or is it a “co-optional” game where I can try and beat my fellow captains?

Absolutely not! We all win, or all is lost.

I kept that out, because the spirit of the game is in teamwork, sacrifice, strategy, and the good of the community. So, you gotta play nice.

The base set only has four ships/captains what kind of replayability do you have with only that limited selection?  Does having all the extras seem like too many options?  How are you avoiding analysis paralysis?

First off, base copies are only available through Kickstarter or the free PnP*, which will remain available on wargamevault. We unlocked a new orbit deck for the base copy that is KS Exclusive. That gives you 4 permutations of “bad guy,” and don’t forget, you can toggle difficulty.

You’re spot on that there’s a lot of content unlocked in the campaign. I did not expect to unlock it all, but I’m so glad we did! Deluxe KS copy is going to have over 400 cards!

Next to my desk, here, is one of the complete playtest copies. It has everything I’ve offered in the campaign. It doesn’t seem too much. I have an idea as to why that is. You see, the expansions don’t work like others you may have seen. They don’t add rules and make the game more complex, change difficulty, or extend play time. You have to “explore” the new decks, one at a time. The first time you play any planet, it will probably best you. The verity of the situation is clear… and you learn. That’s a good part of the fun! 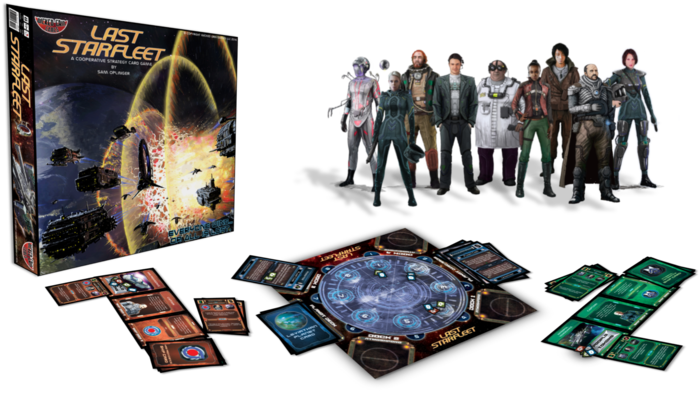 As an Australian board game player I’m used to paying more for shipping, but at the same time that means I have to be a lot more selective on what kinds of games I can buy.  What do you say to those with limits like mine to get us to invest in your game?

Ah, my far away friend... that’s tough. I know HOW to get global availability to work, but this is our first game.  We will have to grow into a global presence. When I start placing 1,500 unit orders for Wicked Grin Games, I’ll be able to solve this problem. But, until that day, two things;


As I mentioned before, this is your relaunch of this campaign with a goal of $6,000 which you’ve handily beaten congratulations!  That said, last year you tried Kickstarter you were asking for $38,500, that’s a pretty big swing of $31,500 and even with going over your current goal you’re no where near that original goal.  What have you changed to allow for a lower goal?  What did you learn from your first attempt that you’ve brought into this campaign?

How long do we got? Hehe. Kidding.

On the page I mentioned contingency planning for distribution and production. Last time I had one plan built around a target quantity that I didn’t realize was phenomenally high for a first time publisher.

I knew when I hit the launch button the first time, I was stepping off a cliff. But, I’d researched and conceptualized and blogged myself stupid. So I leapt... and landed flat, taking a huge monetary loss (to complete the metaphor).

Now, I know what I didn’t know. The difference between my first campaign and this one, even just looking at the two campaign pages, is squarely worth every bit of woe from the first launch. Trial by fire.

As Kickstarter has matured so has the backer audience, they have become more savvy and some would say more jaded as the years have gone by.   To that end, one thing I’ve always suggested creators include is a budget breakdown.  This basic business tool allows potential backers see there is a full plan in place to make your project become more than just pretty pictures and words.  Is there any particular reason you haven’t included one in your campaign?

Hopefully, the fact that it’s a finished product already helps with consumer confidence. That seems to be a requirement for board games on KS, these days. No napkin sketches! Although, I’ll bet a napkin sketch from The Oatmeal would go for thousands!  Haha.

Oh, boy.  ...honestly, I can’t remember. I met the founder of indiegogo at a entrepreneurs conference in Chicago.  But, I think I knew KS before that… you have stumped me! :)

I could have raised $1M and still the metric I’d be most proud of is that I had 35% daily engagement from current backers for the first ~13 days. It’s the surveys. Backers own the campaign and the game along with me. And, they’re having fun. And, so am I.   :)

The wisdom I received, time and time again, was that my following drives my KS and not the other way around. But, I chose not to follow that wisdom, entirely. I’m using Kickstarter as a platform to engage people and develop a following for Wicked Grin Games. I measure the success of that plan by the increase in FB and BGG following throughout the life of the campaign. Check out the Spread the Word Goals and you’ll see how I encouraged that accounting.

And again, most importantly, it has been a LOT of fun. And we get to mass print a game that we are SO incredibly proud of!~

Yes, to all of those things. I’m more sparing in my advertising dollars these days. But, if you head over to a Google search bar and type in Last Starfleet, you’ll see that I took pains to be EVERYWHERE on the web.

The only thing that I’ve found that doesn’t make sense for this sort of project… is Thunderclap.

Thunderclap, for board game campaigns on KS,  is “a tale told by an idiot, full of sound and fury, signifying nothing.”

At least for board games, it is cheaper to finance this thing yourself. But, Kickstarter can do more for you than controlling risks on minimum quantities from manufacturers. If you make it fun. Have a good time with your backers. As with anything in life, good fun always pays dividends.

Sure. I’d like to say something to game designers. I just wrote an article on meepleroast.com about this, so it is top of mind for me...

Make GOOD games. Fun always pays dividends, but as a designer, you are also a teacher. With that great power (I think thats’ my third reference, haha) comes your responsibility to encourage people to be better. So, make GOOD games.