Can AR and GPS combine to make a game that truly makes YOU the main character?

Welcome back to another Kickstarter Conversation!  I am joined by the Corey King from the team at ZenFri LLC to talk about their first Kickstarter project Clandestine: Anomaly.  Thank you for joining us today!

Thank you James! It’s a pleasure to join you.

Let me start off by congratulating you on getting selected as a “Staff Pick” that’s a great way to set yourself apart from the large number of gaming projects.  Can you tell us about your project and why you think it was selected as a “Staff Pick?”
My feeling is that we’re presenting something that is genuinely new, and quite different and that this may have caught their attention. 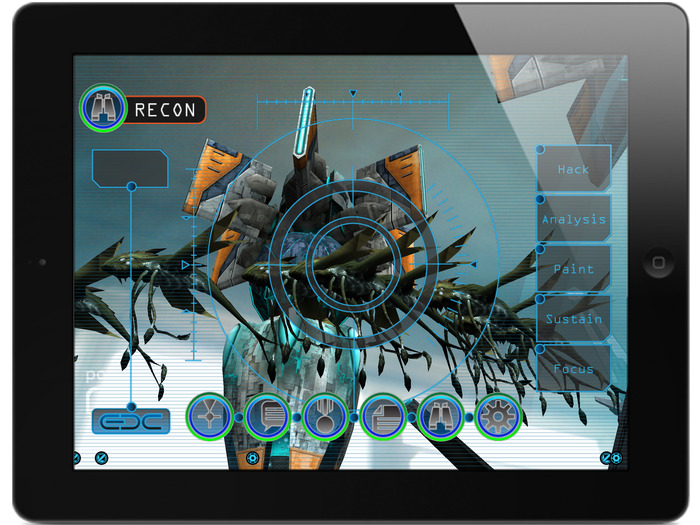 Traditionally AR games are extremely gimmicky.  Something fun to show off once or twice but basically a novelty.  The same can be said of GPS based games, yet you’ve put them both together?  How do you think Clandestine can rise above novelty status and make your “Emergent Reality Game (ERG)” concept a compelling genre?

Well for me, the mark of any fully developed medium is the ability to convey a compelling story. We can see this in early films, and more recently in gaming. Mediums don’t need stories, but to capture a wide audience and become mainstream, I think they do. Currently, few mobile games have a worthwhile story, and with GPS and AR -- none come to mind.

When I began developing Clandestine, I didn’t just grab unpopular game genre’s and mash them together, I see GPS and AR as needing each other to be successful. Augmented Reality needs to know as much about reality as possible to be compelling, or else you’re missing the Reality part of AR. 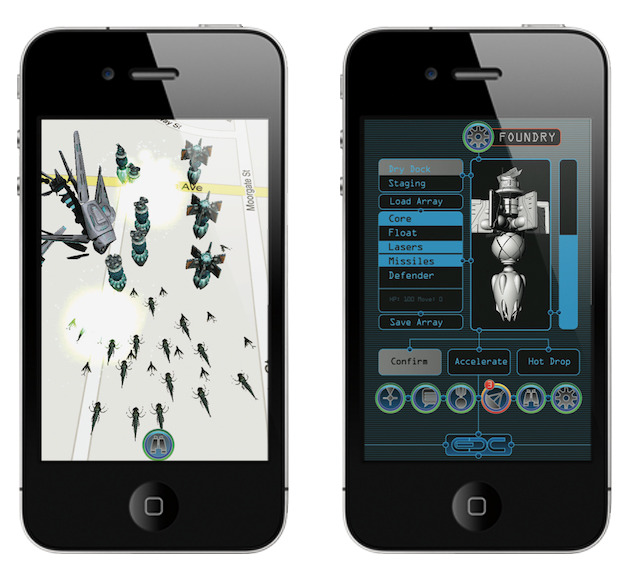 My personal past experience with location based games have always been horrible as I don’t live in high population areas. Does the fact that your game is essentially a single player game alleviate that problem?

I spent time growing up in large cities, towns and even in the country. Each of those places has it’s own type of charm and it’s own type of stories. Our goal was to be as inclusive as possible, allowing data the player feeds the game  tailor the experience to their environment.

We tried to tackle this in a number of ways. First of all we don’t impose GPS play, we incentives it. The game’s main campaign is able to be played remotely through use of probes and utility drones that help farm, collect, and spy when the player can’t.

Secondly, we tried to focus on the emotion of a location, what places do you care about, what locations do you want to protect? These are questions we’re hoping to have the game ask. It was proposed by our Writer and Designer Ryan FitzGerald and is something we’re still exploring to deal with the problem that not all environments, or countries for that matter are the same.

Finally, single player does play a role. While we do hope we can make this have multiplayer elements at some point, the idea that you and your neighbourhood is at the center of the story needs to be told in a single player campaign.

Why should I care about augmented reality?  I admit I always feel like a goof holding up my phone to look at things that aren’t there.  What made you decide to make it a key feature of your game?

We understand that Augmented Reality can make you look like a goof if it’s not properly designed. This is why we avoided making it a FPS. Tower defense allows you to make most of your decisions without holding up your tablet or phone. We were also careful to design most AR elements as either flying  at 45 degree angle above the player, or along the ground, this prevents you from looking like you’re staring someone in the face while playing.

While seeing stuff in AR is important to the game, we see it as a “key hole” into a bigger world, and designed it so that the world is peaked into.

The reason we chose AR is because it allows us to tell stories on the largest possible canvas --the world. While also literally putting the player and their community at the center of the story. No other medium can do this, no other medium allows you to control and move epic 3 story tall buildings through your real neighbourhood. Most mediums are about transporting, AR is about transforming and we think that’s empowering. 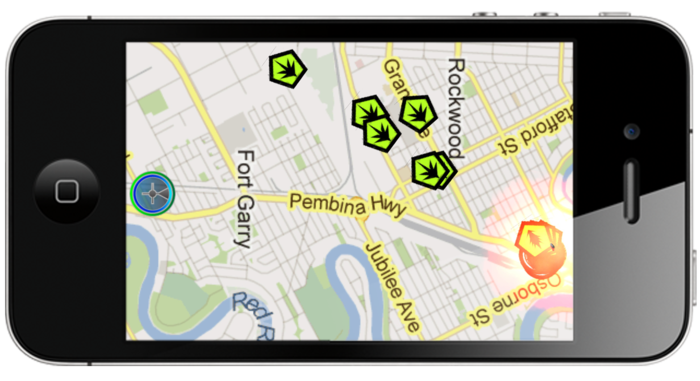 Can your game work on systems that don’t have cameras or GPS such as the iPad 1st Gen?  Or is this strictly a current gen game?

It takes a lot of power to run all the calculations required of this type of AR, so we recommend using a more current mobile device. However,  the game can be played without a camera, it’s only the Augmented Reality elements require it.

Another problem I’ve seen with games that try to bridge reality and the game world is timing.  Is there a “pause” function?  Or will I be forced to keep checking up on my arrays and such to progress through the story?  How much time do I need to devote to the game in a single sitting to enjoy it?

We’re still playtesting a lot of that stuff, trying to get it right. Our goal is to have several types of missions available, some are quick and simple, others take time and are meant to occupy several hours on a nice afternoon.

We’re experimenting with a unique type of persistence that tries to find a middle ground between being realistic and allowing you to play when you want. We certainly won’t have unwanted alerts hassling you to play all the time, nor have you go out for a nice evening with your family only to have all your hard work destroyed.

What we don’t expect to have is a replay button. There is no going back in this game. You can replay missions for fun, but they are not ‘canon’ to your story. 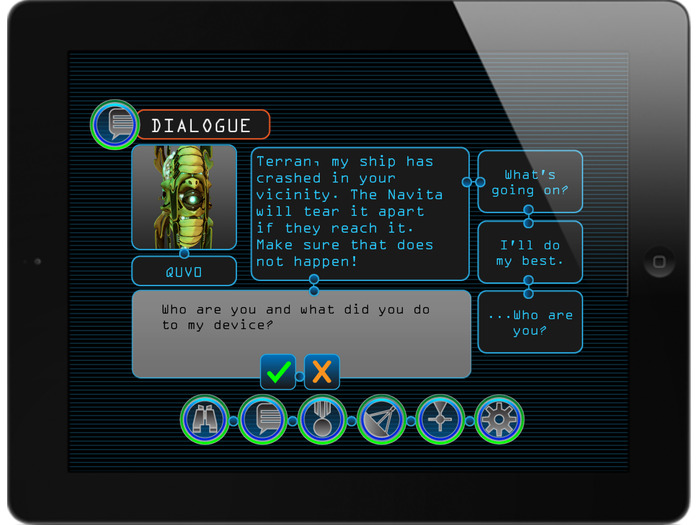 Are you using any particular game engine like Unity or Unreal or is this all custom code?  How far into development are you?

We’re using Unity, a Augmented Reality system called Metaio and a large amount of our own custom code, especially for the geo locative stuff.

Development is hard to define on this project. I’ve been slowly working on this for several years, I started in filmmaking and this is my first game, so it took time to get going, but with a full  team it’s been about 6 months of design, art and story work. Coding has had less time, about 3 months. We just finished pre-production, what you see on Kickstarter is only the prototype.

This money will help us jump start full Production. It won’t be the only funding we require, but will allow us to keep working without breaks and without compromising. 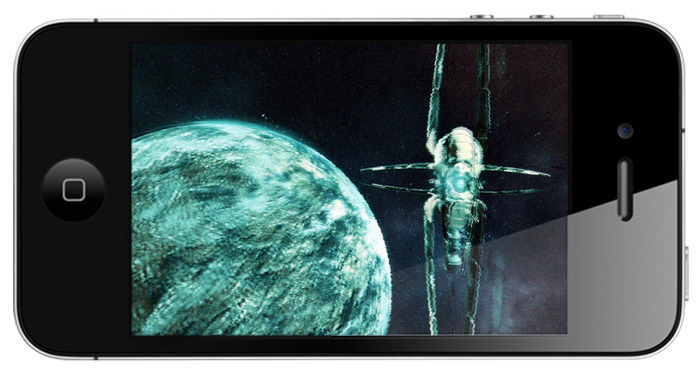 I’ve known about it since it launched, I don’t recall how I first heard about it.

I’m not sure if it’s a fad or not. I can see it’s slowly changing into more of an avenue for pre-sales then a place to donate to good ideas, rarely is something funded that’s not near complete or an established person or brand these days. Which wasn’t it’s founders intent.

The ideas are still there, and it’s still technically donating, but it doesn’t always feel like donating anymore.

Not to say there's anything wrong with this, these changes  to the tone of kickstarter, and this whole celebrity thing that’s happening, is what the community seems to want. I say let it be whatever it wants to be, and enjoy it while it’s here. It may be here for a long time, it may not, but at least we have now. 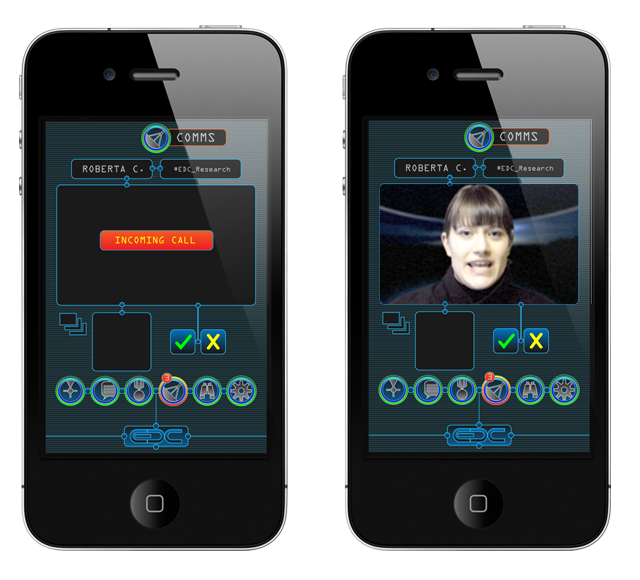 We have a lot of cool stuff we hope to unveil as the campaign goes on. Just stay posted.

We’ve had some momentum with Facebook and Twitter, and some press is starting to pay attention. I don’t plan to advertise, if it doesn’t work out this time I might reconsider if I do this again, but to me the goal of the Kickstarter is to try to build a buzz without traditional advertising.

Ask me again when it’s over, I think I’ll have a better perspective on it then. 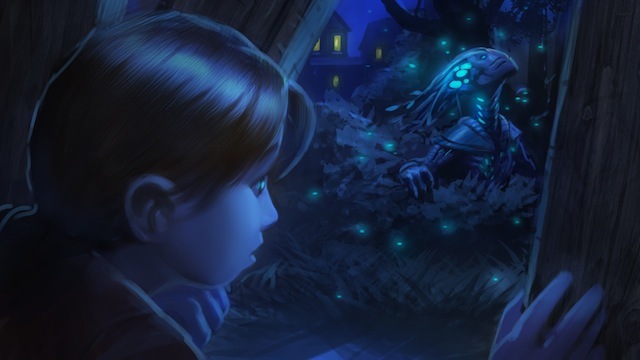 I enjoyed having the time to discuss my project, thanks for having me.