If you build it, they will come


Welcome back to another Kickstarter Conversation!  Today I am joined by some of the talented folks over at Quixotic Games to talk about their first Kickstarter Canterbury.  Thank you for joining us today!


Thanks for the opportunity to discuss Canterbury, James!

Canterbury looks like it could be confusing to the uninitiated, could you tell us a bit about the game?

Canterbury allows you to take on the role of a Saxon Lord who is charged with building the city of Canterbury into a prosperous capital. Each structure that is built in the city provides a service such as food, religion, or culture. The players are vying for control of the city’s districts by providing the most services throughout the city.

Unlike other city-building games, we have removed the concept of personal wealth from the game. Whenever a player scores points, the city marker advances on the Prosperity Track, and this in turn dictates how much gold is available to the players for new building projects.

Another interesting feature of Canterbury is that, other than starting turn order, there is no luck in the game. Each session unfolds differently based upon the decisions made by the players as they build the city together. There are a multitude of strategies available as players seek to gain control over each other's districts and simultaneously provide the most of each particular service to the city. Each session promises a different experience and a brand new city when the game is complete. 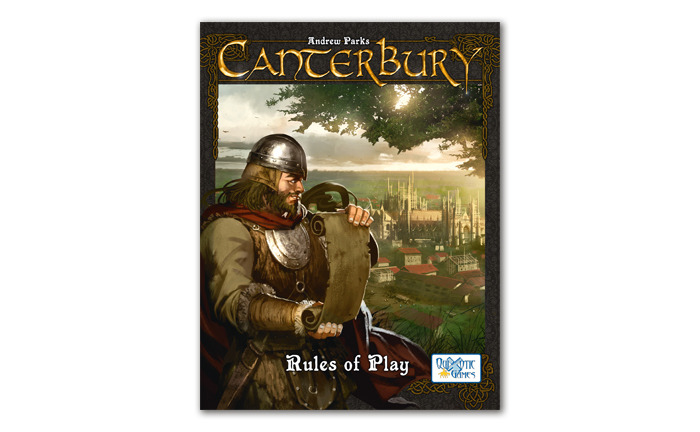 As a worker placement game Canterbury should have much of the randomness some folks dislike removed, but is there more than just worker placement to this game? Resource management?  Trade? Location control?

Canterbury isn’t a worker placement game. Players seek to gain control of different districts by building structures there, and to provide the most of each service to the city. The richness of the gameplay comes with structure placement, in particular the placement of larger structures that spread their services to multiple districts and allow players to strategically take over their opponent’s districts.

Could you describe a basic player’s turn?  How much analysis paralysis are we facing with Canterbury?

Our goal for Canterbury was to keep the rules simple and streamlined. On your turn, you choose one of three actions (Levy Funds, Full Build, or Tax & Build). After you complete your action, your turn is over. There are of course lots of different strategies to pursue. Players need to develop strategies over multiple turns, and sometimes you will have a turn where you need a moment or two to think ahead. For the most part, however, play moves very quickly and downtime is minimal. 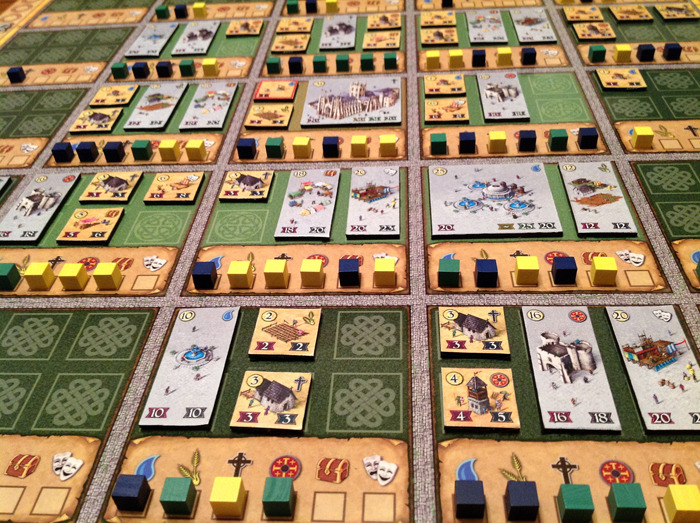 This kind of game looks like it would be perfect for the “digital treatment” either on tablets, computers, or consoles.  I could imagine the city “building up” out of the board as the game is played, has there been any talk of doing that kind of thing in the future?

We’d love to have a digital version of Canterbury, but no plans are in place at this time.

Was there a conscious effort on your team’s part to make the game as language neutral as possible? 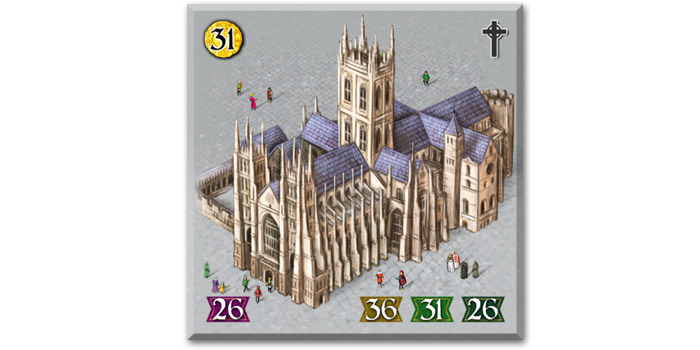 This is by no means your first game, your previous game Core Worlds (Which I own) was very well received.   Are you working with Stronghold Games again for Canterbury or is this all just Quixotic games?

We’ve worked with many publishers over the years, and have a great relationship with all of them. Stephen of Stronghold Games is a personal friend of mine, and I’m sure we’ll be working on many more games together in the future.

But we plan to publish Canterbury on our own. That is the purpose of our Kickstarter campaign.

Where is the game going to be manufactured?  Will backers be waiting for shipments from China to you before they get their copy of the game?

The game will be printed in Germany. Many who live in Europe will receive their games directly from the printer. We will ship the remaining games from our warehouse in Georgia.

I frequent Boardgamegeek.com on a daily basis, and there are many amazing projects there that have been born through Kickstarter.

I don’t think Kickstarter is going to replace traditional publishing by any means. But for someone like myself who lacks the capital to self-publish, it presents a great opportunity.

We have been doing interviews on podcasts and elsewhere for the past several weeks, and we hope these interviews will provide further insight into the game. We’ve recently posted our Gameplay Video which has also been well received. We’re also introducing new Add-Ons based on player feedback to give players more opportunities for exclusive items to add to their Kickstarter copies of the game.

As mentioned above, we’ve been mentioned or been interviewed on several podcasts, including Giant Fire Breathing Robot, On Board Games, and Ludology. We post regular updates to our Facebook Page, and we posted our Gameplay Video on YouTube. We are advertising on Boardgamegeek.com, and are in the midst of hosting an exciting contest there.

Make sure you anticipate all costs ahead of time, including the cost of shipping to your customers. That can be a great challenge when planning out your game.

I’d just like to thank all of our supporters for their encouragement and support. They have really made this a magical experience for all of us working on the project.