Does it Matter where your Underwear Goes?


Welcome back to another Kickstarter Conversation!  Today I am joined by Manny Trembley who is here to tell us a very old and bad joke with Under Where?  (Just made you say underwear)  Thank you for joining us today Manny!


Glad to chat with you! And I have to say that i am particularly drawn to groan inducing jokes. It’s in my blood. And this one is no different. Call me simple but I love stupid puns or simple word play.  Alliteration.  It’s all gold to me.

Obviously you’re going for a bit of humor with your project, could you tell us about Under Where?  Under Where? is a homage to classic super heroes.  The ones that proudly wore their undies over their tights and wore tiny “domino” masks to not hide their identity very well.  The story takes place in Jewel City where heroes and villains have heavily populated the area. And one of the prominent dividing lines is whether you wear underwear over or under your tights. Our story specifically follows two heroes.  Whip Wilson Jr. and Tulip Topps are the only children of their respective super heroic families. They’ve just arrived back in town to take up the mantle of primary crime fighter for their families and when they bump in to each other the attraction is evident but they soon realize that their affections are forbidden by their parents. Call it a superhero version of Romeo and Juliet but with less suicide at the end. 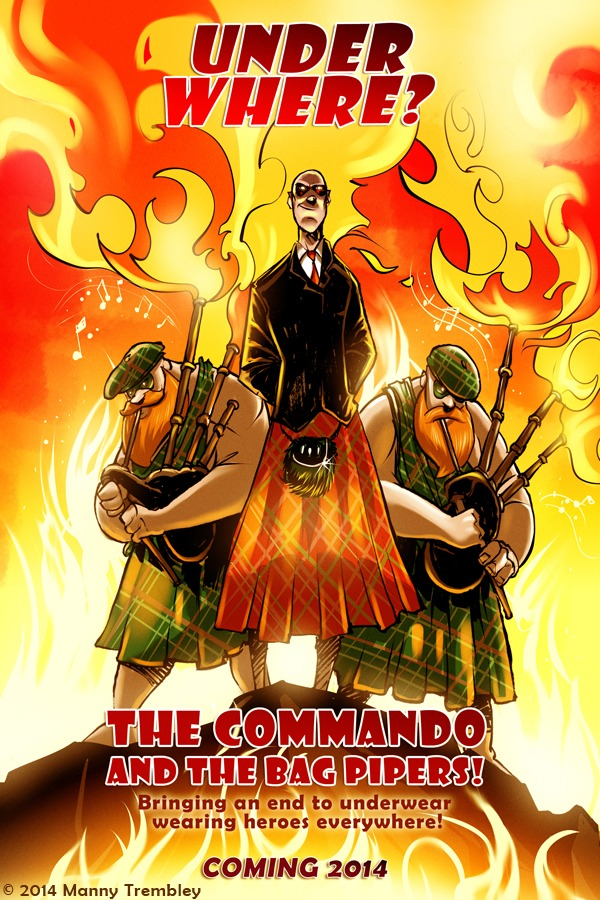 Honestly I got the joke, chuckled, and was planning on moving on when I saw The Commando and the Bagpipers.  Once I was able to see again I sent you the invitation for this interview.  Just how fully into the underwear gag are you going with this comic?
The joke is the catalyst actually for the entire narrative. The two feuding families began their feud when Whip Wilson Sr. and Turner Topps were young boyhood friends. Whip was the instigator of the “what’s that under there? Under where?” joke. That joke is what divides the two families and thus later divides heroes.  It’s a light animosity.  Not “horseheads in the bed” animosity.   I think anyone expecting that the book is a series of potty jokes will be sorely disappointed. I’d say the book is more a love letter to fearless unashamed heroes and villains that embrace campy and goofy lifestyles.  Much like the old Batman series or the Batman animated series.   The Commando is what you think.  He never states it publicly but his name refers to a no under wear lifestyle. Obviously. And for him, that is what sets him apart from the common hero/villain. One could say he is the Lex Luthor of this world.


The comic will be a graphic novel, but  broken up like it was a collection of single comics?  Does that mean all the sections will be of equal length as if you were publishing them individually or are you flexible with that format?  Will the book be in color?
I like the idea of a collected graphic novel.  As if I had made the book as a six issue mini series. Or an ongoing title (if there is enough demand for more Under Where?).  I will be making covers for each issue. And I will be loosely adhering to the floppy format. About 20 pages per issue. Give or take a couple pages. In the end this first book will be 5-6 issues (100-120 pages).  The format is meant to pay tribute to the floppies I loved when I was a kid.  And yep, it will be full color. 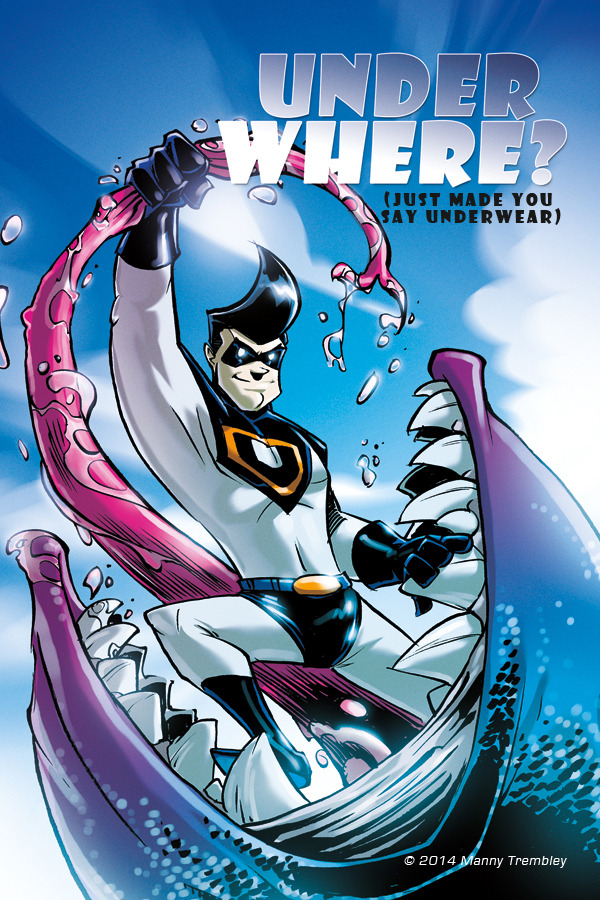 Are you creating enough comics to meet the Kickstarter rewards or are you doing a full print run for convention or online sales?  Will this Kickstarter be the only way to read the continuing adventures of Whip and Tulip?


This is my 4th Kickstarter and each one (except the third one that failed) was budgeted to have a print run of 1000.  I will be selling books online, Amazon and at conventions i can get to.  I hope to do more Kickstarters in the future. I think Kickstarters are a great way to gauge interest and to allow fans to help shape the way a project moves and grows. I like that. I know it bugs some creatives to have so many people watching as you work. So to speak. But I really like it. If there is demand I may move to publishing digitally via Kindle, nook or itunes. I want everyone to be able to read this book and the backers are the reason anyone will get to.


One of my biggest bugaboos about a Kickstarter is the budget breakdown.  These basic business tools are essential to planning out a project and are often a good way to convince prospective backers that there is a plan for the funds.  Why didn’t you include one in your campaign?  Where is the $7,000 going?


I haven’t included a budget breakdown for any of my Kickstarters. I think its because my budgets are not bloated. This book will cost me about $5500 to print. Approximately $500-800 to ship. About $700 in fees (If I only raise 7k).  $50-100 in prints. $50-100 in shirts, etc.  As you can see, there is nothing there for Bahama trips or mai tai’s. I start my goal amount at the amount I need to pull this off without paying myself. And I also do my very best to add value, content, etc. for stretch goals.  My first book, Martin Monsterman had a goal of $7000 and it raised $12,000.  I used that extra money to add almost 40 pages to the original length.  Obviously if you raise enough beyond your goal you stand to make money from a project.  But my first step is not putting money in my pocket for these.  I enjoy putting as much of the money as I can into the books.  I also printed in the US. Sadly, that makes my books a touch more expensive. I wish it was not the case but I like trying to keep work local. 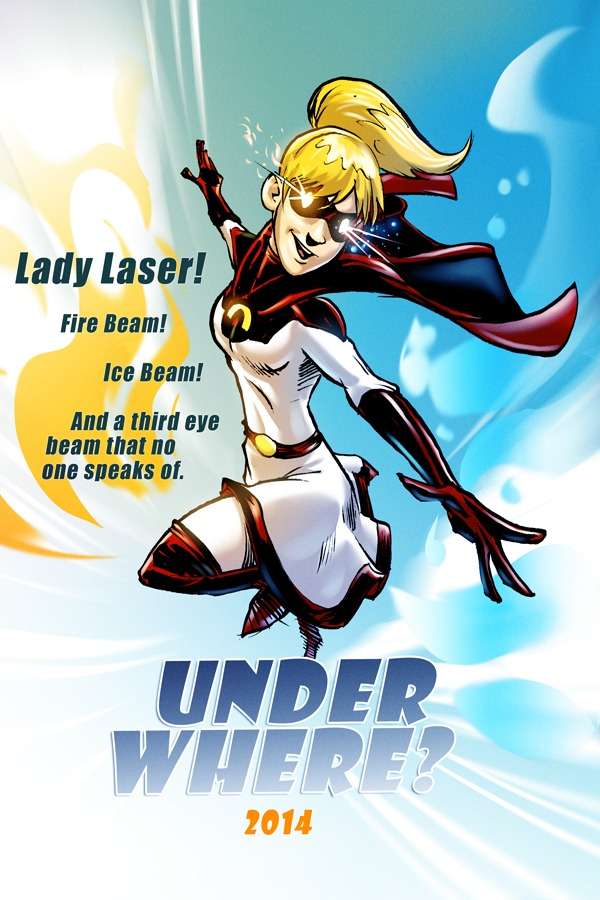 
I had heard about it 2-3 years ago.  But I never thought I had the chops to succeed with it. And my normal MO is to hide my head and ignore it. My friend Jeff kept poking me to do one and after a year of his prodding I finally took the plunge. It’s an addicting process and my favorite part is how in control the fans and backers get to be.


That’s a great question. My first project I did updates with art sketches a LOT. So much so that I got a few messages saying please update less. :) I am very active on facebook and twitter.  But the truth is that I am not a big name nor do I have a huge following. So, word of mouth and people taking an active interest in me and my work is how the word has spread as much as it has. I keep designing characters and I try to share those as much as possible.  I have planned to do a video update at the halfway point (Wednesday Feb. 12th). I keep trying to use twitter. But that’s a new beast for me, sadly.   This is only the second interview I’ve done for this project. I’ve sent out press releases and I’ve emailed/tweeted to A LOT of people. Sadly, I know myself and I know that i struggle to sell myself very well. I know it’s cheesy, but I hold out hope that a genuine project done with passion and heart will win out in the end. Naïve? Probably. But I have to believe that projects based in passion will find their audience. 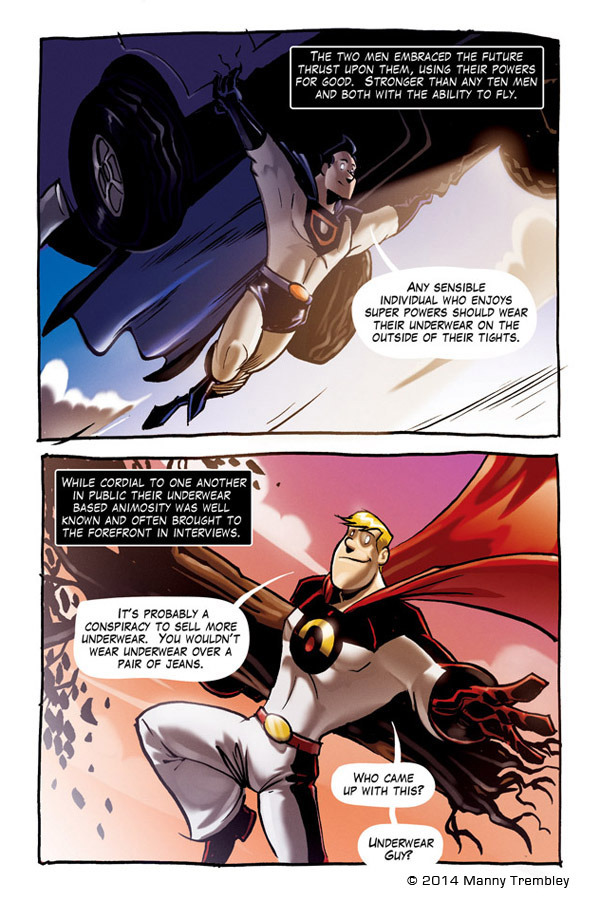 What kind of media attention have you received with your project?  How are you spreading the word?  Facebook?  Twitter?  Google+? Youtube?  Advertising?  Are you using Kicktraq to track your progress?
I wrote an article for Bleeding Cool asking the question about whether comics are fun? I did an interview that is supposed to air next Monday (Feb. 10th) for a podcast. I’ve been asked to do a few podcasts for local media.  I’ve seen some retweeting from fans and people. I post A LOT on facebook and twitter.  And yes...sadly I am addicted to Kicktraq. That’s a devil of a site. It’s both parts useful and daunting.  Watching the ebb and flow of a project can be rough on the ol’ ticker.


Be passionate. Be genuine. Kickstarter backers can smell disingenuous projects.   Make books because you love making books not because it’s a get rich quick scheme. Very few people ever make tons of cash from a Kickstarter and even the ones that seem to make lots of money often have bigger headaches than you’d think that come with all that money. I also recommend that people ask for what they need. Not what they want. I want to stay at home and make comics all day! I want people to buy enough books to allow me to do that. But I’m not there yet. For me personally, I can’t ask for 50k so I can quit my job and make books. I work a day job and make books because it’s a sickness. I have to make them. I’ll explode if I don’t. :)


I appreciate the time to talk about Under Where? Thanks for giving it a second glance. I can see that it might be easy to dismiss a book based off a goofy title/joke but I think if people give it a chance they might find a book that embraces fun, action, wordplay, alliteration, romance and a genuine love of comics and art.