Welcome back to another Kickstarter Conversation!  I am pleased to welcome David who has brought one my childhood memories into the future with his Sabertron Kickstarter.  Thank you for joining us today David.


Thanks James!  Happy to talk to you about this amazing experience that is Kickstarter, and my life-changing invention, Sabertron.


As the oldest of three boys who grew up watching Star Wars your project makes me wonder where you were when I was growing up.  Can you tell us all about Sabertron and why my 8 year old self wishes you product was around then?


Well, you certainly don’t have to be 8, as many 40-year olds are telling me on Facebook.  Sabertron is similar to the game of laser tag, but with swords.  When you hit your opponent, he or she loses “health” just like in a video game.  When your opponent hits you, you lose health.  But sword-to-sword hits are ignored.  I am using the same kind of sensors that are found in smart phones, which makes them cheap and plentiful.  I created Sabertron because I am very competitive and I like to have fun.  The idea was so simple to me that I thought for sure it must exist.  After years of waiting around for someone else to invent it, I finally did it myself.

So beyond classic lightsaber duels what can the Sabertron do?


There are currently five game modes, everything from a simple “one hit to win it” to a lengthy struggle.  You could really work off some calories and exhaust yourself on the tougher modes.  This is what software can do to turn the embedded hardware into something magical.  We arent done dreaming up game modes and settings either.

How does the Sabertron know the difference between hitting the sword and hitting a hand?  Does the hilt count as sword?


I currently use accelerometers to tell when I have hit a sword, so anything attached to the sword will be seen as the sword.  That includes your hand, but probably not your wrist.  The sword has to move as a result of the impact.  We may fix that before we go to production, but I think that it would work perfectly fine as a two-player introduction to electronic scoring as it is now, if body blows are the only thing that will register as a hit. 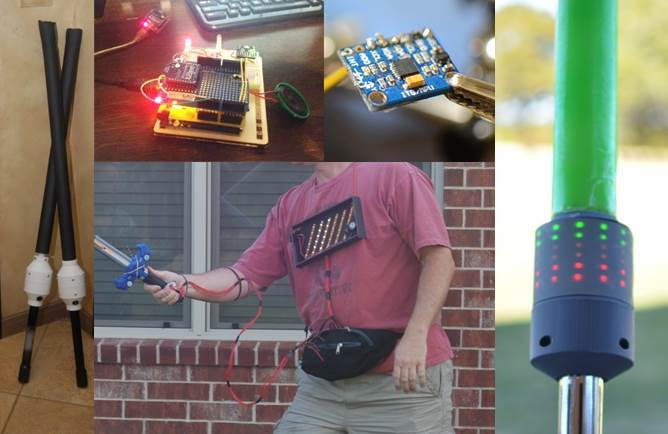 Now the 35 year old kid in me imagines all sorts of fun things to do with this system, my concern is how sturdy are they?  I remember the lightsabers I had as a kid bending and breaking so we moved up to harder things like TV antennas and bamboo poles. Which of course was fun until I hit one of my brothers (little wimp!), what are you doing to make the Sabertrons strong enough to hit people with but not so strong to seriously hurt someone?


We are using polycarbonate cores which are advertised as unbreakable.  They don’t flex much, are super light and wrapped in foam.  We will test these exhaustively before we ship to ensure that they are as tough as possible and long lasting toys.  We are designing them to be appreciated by adults, like something you would find in a high-end gadget store in the mall.

Since the sensors detect when the hit something other than the blade just using a trashcan lid won’t help as that’ll just count as a hit correct?  Could I just tap on the ground a few times and have it counts as hits as well or is there a distance measurement in there too?


You can’t tap on the ground, because the accelerometer can detect the downward angle and ignore that.  But you could hit your own hand or a tree or something.  You and your buddy have to at least agree not to flagrantly cheat for two-player mode.  We will be releasing a multiplayer adapter in other accessories like shields in late 2014.  Those accessories will include proximity detection and be harder to fool than the simple two-player version.  You will not need a “no cheat” agreement in that case. 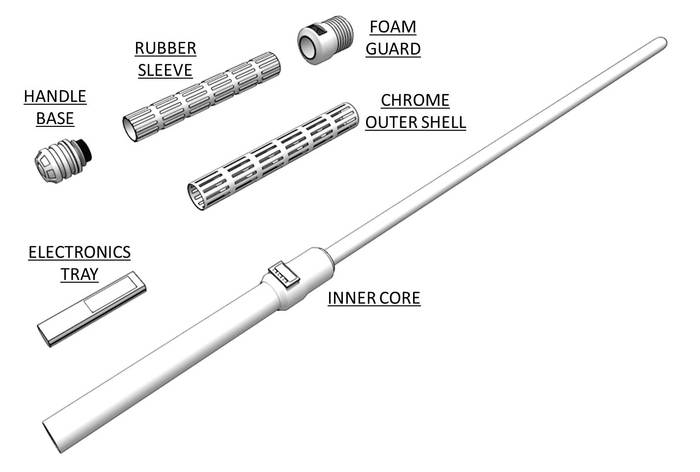 Your campaign shows proposed shields and body armor designed with this system in mind but this Kickstarter does not include these correct?  If, assuming you’re funded, you made these items at a later date would the Kickstarter created items work with these shields?  Would you need to patch the swords to update them with the new protocols?


The Kickstarter rewards are two-player swords only.  Later adapters are planned to allow multiple players and the accessories like shields and body armor.   We plan to make the two-player swords compatible with all of the future accessories, but if there is some last minute change that makes these first-generation swords incompatible, we will take steps to make sure that our first cherished customers are happy with the arrangement.

One of my biggest bugaboos for Kickstarter projects are budget breakdowns.  These basic business tools are a great way to show prospective backers that you have a plan in place for the funds.  While you do describe where the funds are going in a general sense you didn’t put in a full breakdown, why is that?  Is it because the costs are still in flux?


We didn’t want to publish a detailed budget because we are using worst-case calculations for everything.  We didn’t want to get into a discussion of the price of LCD displays, or even plastic injection molds, for example.  We know that we will get better prices for some things once we are negotiating with suppliers and really searching out the best, and we also know that some design fees are going to be highly variable.   So we left some room in the budget for completely unexpected overruns. 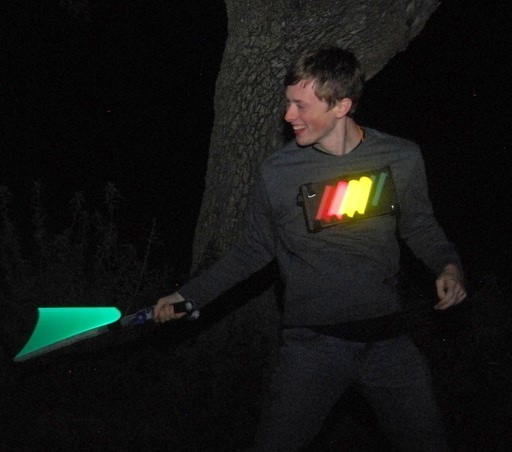 
The cost to make the first Sabertron is probably 90% of the cost to make 2000 of them, or something like that.  That very first one is the most expensive one to produce due to plastic molds and design fees and iterations.  That is why we have the goal that we have set.  We can then use the existing tooling to continue to produce Sabertrons for our first non-Kickstarter customers.  The Kickstarter backers are kicking off a whole new line of products.


I can’t remember.  I am an avid reader of Engadget, and they have been covering Kickstarter forever.  I’ve always loved the concept.


So far, it is just project updates.   This is our first Kickstarter, so we are learning a lot, I am sure we could be doing some things better.  We are working on new videos now.


The media push on the first day was really good, with Engadget, Tech Crunch and others.  Since then, we have been picked up by IGN, Cnet, Yahoo News, and the Discovery Channel Canada interviewed me for Daily Planet “Invent This!” week.  I couldn’t have dreamed for better media coverage.  Of course we are on Facebook, Twitter, Google+, Pinterest, Instagram and YouTube.  It’s a full time job.  We do all of the updates ourselves.  Kicktraq is good. 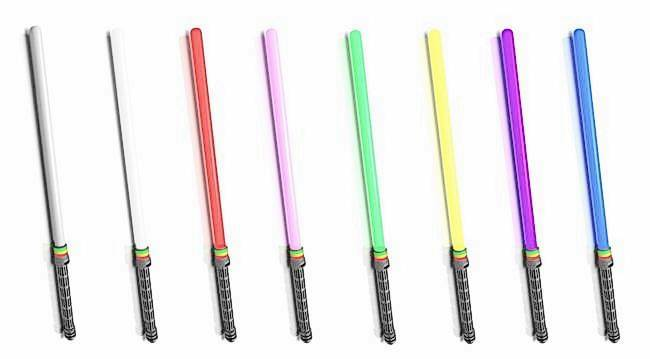 
Do it!  Stop dreaming about it.  I put together the majority of the Kickstarter campaign myself.  Emulate other successful campaigns.  If you believe that you can skimp in one area, go find validation in a successful project.  You definitely need a pre-Kickstarter campaign to drum up interest and Facebook/Twitter followers ahead of time.  It costs money, unfortunately.  It doesn’t seem that anything can go viral on its own.  You can pay to get attention, and you can tweak the slope of the line that is the rate of new followers, but nothing you do can make it climb in an exponential fashion.  We started only a few days before our launch, but we should have started a few weeks ahead of time.


I am just happy to get this project where it is today.  I’m amazed that we have nearly $50,000 amassed so far and that thousands upon thousands of people have seen my invention.  It’s something that will be with me forever, and I appreciate the opportunity to do this.