Discover the Wonder of Nixie Tubes


Welcome back to another Kickstarter Conversation!  Today I am pleased to be joined by James Budai who has made an interesting project for Kickstarter called Nixie Tube Clock.  Thank you for joining us today James.

Hi James.  I’m happy to be here, and very excited to have started my first kickstarter project.

I guess we’ll start with a simple question, what’s a Nixie Tube and why did you make a clock using them?

A nixie tube is a device that was used in very expensive scientific instruments in the 1950’s, 1960’s and early 1970’s.  It is a glass tube filled with neon gas and flat metal number stacked on top of each other.  Unlike other tubes of the time these tubes would not get hot.  They produced light by exciting the neon gas around the metallic digits.  Unlike light bulbs that create light and heat from current flowing into a filament.

I thought it would be neat to produce a clock with them because I figured everyone could use a clock, and it highlights the features of the nixie tube well. 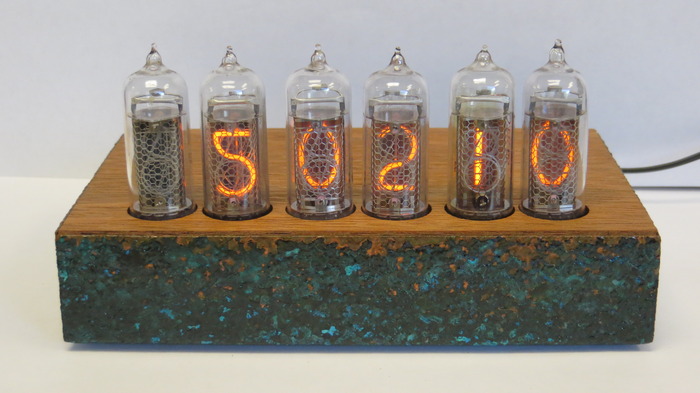 What’s your background working with Nixie Tubes and such?

I first saw an old piece of scientific test equipment with nixie tubes while I was in the US Air Force in the mid 80s.  About ten years later saw some old equipment at HP while I was working there as an engineer.  I was alway curious about the technology but didn’t get that involved with it until I purchased a HeathKit frequency counter and tore it apart a couple of years ago.


Who is your target market for this project?  I notice for those who aren’t used to working with assembling boards and tubes will have to pay $400 for a clock.

I had seen similar clocks that were more expense and decided to make my own.  I really wanted to give the clock a retro feel with an old style case.  People that have used older equipment are always happy to see the nixie tubes, they were my original target audience.  I have found that once someone looks closely at the clock there is interest no matter what their age. 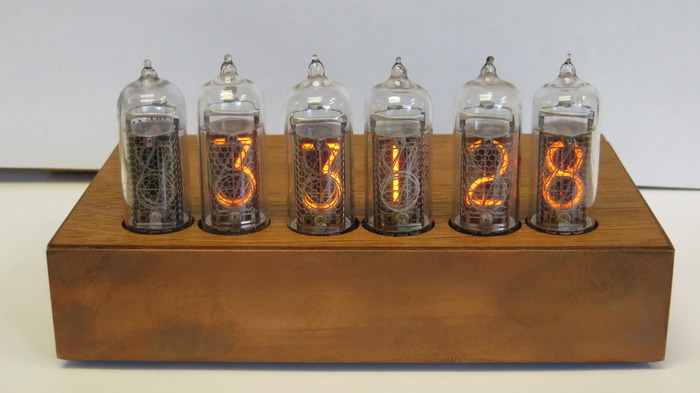 Lets get to my biggest complaint with Kickstarters, and that’s a budget breakdown.  These show you’re serious about your project and have actually worked out costs and made a plan.  Why does your project not have one?  Where is the $30,000 you’re asking for going?

Well I never really thought of sharing my budget information on kickstarter, but I worked on the budget for about two weeks before starting the project.  Here is a rough breakdown of where the money is going.

10% to kickstarter / amazon
10% for shipping and packing material
20% for the copper and wood cases
15% for the nixie tubes
30% for the printed circuit board and getting it professionally loaded.
15% for assembly and everything else.

Do people not make Nixie Tubes anymore or are they just a limited use item that causes them to be $5-$10 a tube?

The US and western europe stopped making nixie tubes in the mid 70’s.  Eastern europe continued to build nixies into the early 90s.  So, basically no one has produced them for about 20 years.  They are getting harder and harder to find every year. 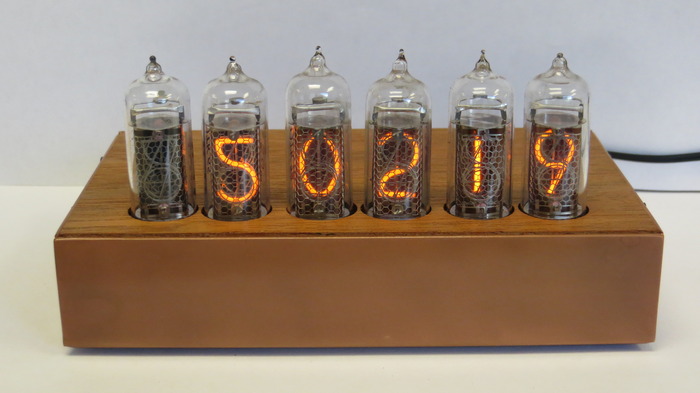 Currently there is an Ardunio based Nixie Tube project up on Kickstarter right now as well.  What’s the difference between your two projects?  Is all the logic for your clock built into the board?

I have seen that project and it is a lower cost nixie tube project with very different target audience.  It appears that his project is geared to the person that wants to experiment and play with nixie tubes using an android based microcontroller.  He is using smaller and less expensive nixie tubes.

My project is a complete working clock that anyone can power up, set the time and just use it.  The users of my completed device don’t need to know anything about electronics to use it.  One of the reasons that my electronics is more more expensive is I designed it to extend the life of the nixie tube.

It appear from the video of the Ardunio project and other inexpensive nixie tube clocks that the digits are pulsed to produce light.  Pulsing the nixies make the electronics less expensive but reduces the life of the tubes.  This was one of the many things I learned from reading the actual datasheets of the nixie tubes.

My daugter supported a successful kickstarter project that saved a local independent theater that need money to purchase a new digital projector.  It sparked my interested and I started to look at other projects.

I check the comment and messages often and respond to all questions swiftly.  I have already given a project update.   I have no other planned videos and/or stories.

It is being shared on my wife’s Facebook page.  I belong to some internet forums that I have shared the project and actual sold some prototype units though.

I have never heard of Kicktraq but I’ll take a look at that after this interview.

Getting the word out about you project is key.  Lower cost projects seem to do very well.  Almost everyone can afford $20 to $40, but if your project s over $100 your pool of backers might be quite limited.

I designed my product before knowing about kickstarter.  I didn’t make these considerations on my current project.

I hope people check out my project and look at nixie tubes in a new light. (pun intended, haha )  So far over 600 people have watched my project video to completion.  Many of people might not have known about nixie tubes before my video.  Regardless of my project getting funded, I feel that it has been a success.  Kickstarter is an awesome concept and I plan on designing something new with my fuller understanding of what is needed for successfully funded project.

Thank you for your time and interest in my project!