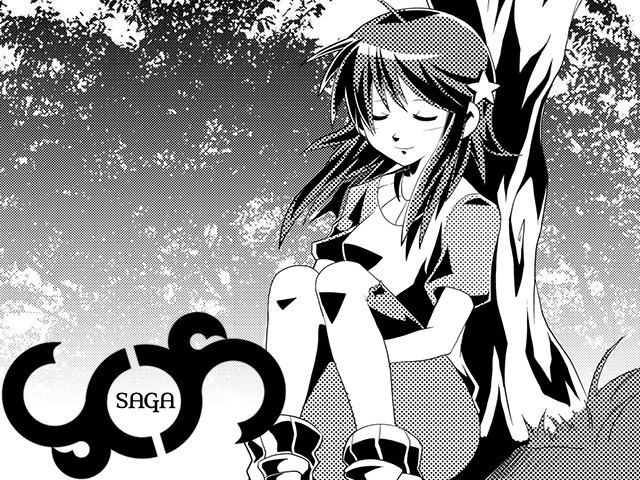 Welcome back to another Kickstarter Conversation!  Today I am joined by Jennie Golliday who is here to talk about her Kickstarter project SOS SAGA Otome.  Thank you for joining us today Jennie!

Thanks for giving me a chance to share what my project is about!

Now that’s quite a mouthful for a game title!  Can you tell us a bit about the project?

SOS SAGA happens to be the abbreviated form of the real story name, ‘Scions of the Seraph’.  And the story follows the ‘Seraph’ and the guardians that protect you are simply called ‘Scions’.

‘Otome’  isn’t really part of the title.  The game is supposed to be an ‘otome’/’visual novel’, meaning that my target audience is female.  Doesn’t mean that the story won’t appeal to men, but the main character happens to be a teenage girl.

In today’s gaming market, more girls are picking up the controller to play games.  And a good portion of them like to play role-playing and/or dating sims.  Unfortunately, there’s just not that many English versions out there to play.

The webcomic shows only so much that goes on inside the story’s walls.  There are complex bits and pieces throughout the story that happen which can be hard to portray accurately inside comic paneling.  But with the ‘Visual Novel’, I can write out the portions that get overlooked and still show images to reflect the scene.

How long have you been writing Scions of the Seraph?  I notice you’ve decided to take down parts of the story from your site, why is that?

Been writing on SOS since my high school days which is just about fifteen years ago.  And I took down parts of the story in order to have it edited.  As the chapters get worked on, I’ll be placing them back up to the website.

Plus I want to keep some of the intrigue of the story while the game is being developed.

What does your story bring to the table that I can’t get in another Webcomic or Visual Novel?  Give me your best sales pitch.

With SOS, you’re going to find a whole new version of the world we live in as well as a few new places to discover as the story progresses.  There’s different types of characters to run across as well as trying to figure out an age-old mystery that the main character is tossed into.

I’ve even taken actual events from my real life to use as reference.  Not that I’ve ever really encountered demons and angels, but I’ve had some interesting occurrences that help shape the story.  Was told long ago, you can’t write a good story without experience.

I have different artists that work under me to do the comic, character artwork, novel inserts, and game art.  What you see on the website for the comic is the current version that gets updated every Monday.  While the images you see on Kickstarter were to be used as filler pages inside the printed version of the story and were drawn by my concept character artist.

As someone who graduated highschool back in ‘97 as well I have to ask how much has the story changed since you first wrote it?  I know nothing I wrote back then was anything but naive now that I’m older and wiser so I would expect things have evolved quite a bit.

To be honest, I graduated back in 1998.  The story was created in 1997, at the beginning of the school year, as a class project.  Back then, it was nothing more than a three page short story for English that was to have yourself placed inside a new world (hence why the main character has the same name as me).  And was fueled by my love of anime.

Years passed and the story grew up with me.  Naive would be a perfect way to describe the first versions of SOS.  The characters back then almost seemed to be ‘childish,’  too ‘good’ or ‘evil’.  With time, I was able to realize that there are more to people than what is shown on the outside and I wanted to prove that in the story itself.

Since you have Multiple Sclerosis you’ve had to get others to draw your work for you.  How hard is it to have to rely on others to express your story to the world?  Has it gotten any easier now that you’re bringing on more folks to create the Visual Novel?

When I first started having problems with MS, I was stubborn and wanted to still do everything on my own.  Didn’t want to think that an illness could truly affect me, but with time I began to notice that my own artwork wasn’t consistent.  I needed to find help from other artists.

Which wasn’t easy.  Back in 2007, I started the web comic on SmackJeeves.  And had an artist working along side me as I continue writing out the story.  When she got too busy to work on the pages, I found another and then a third.

Late in 2011, the comic had to go on temporary hiatus.  The artist was going through some personal difficulties.  Then my husband’s kidneys failed.  Most of my time then was going back and forth to the hospital which was two hours away.

2012 hit and I was able to get back to working on the comic.  Had to hire a new artist, but this time I was a little wiser with how to deal with others and the comic pages.  Beforehand, I would simply give the artist the script and let them work out the panels.  This time I do it for the artist in order to ensure the right amount of pages are released for each chapter.

I can’t really say whether or not things are easier.  But I do know that working on the Visual Novel is allowing me to see the story in a new perspective.  And having others working on it with me gives way to new ideas.

Are you using an established game engine for the game or are you using custom code?  Any chance for an iOS or Android release?

For the first volume of the series, we’ll be using Ren’py.  If the game sells enough copies, we plan on making our own engine for later volumes.  And I would love to see the game on iOS or Android.  But I’m not positive whether or not Ren’py can be put in those formats.

I learned about Kickstarter from Tosh.O.  I know that might sound a little odd, but I heard Daniel Tosh joke about the website on his show and thought that it would be a good idea to help get funding for the project.

Since this is my first Kickstarter project, I’m still learning how to work with promoting the game as well as give interesting updates that the backers would enjoy.  Currently, the updates are sneak peeks of the game in development.  From character art to backgrounds, I plan on showing off the things that will be found inside.

Plus, those who do back the game will get chances to play the demo and beta as the game progresses.

Can’t say I’ve received too much media attention.  I’m mostly just going to the websites I tend to haunt and promote the game that way.  I’ve so far used Facebook, Tumblr, Lemma Soft Forums, and DeviantArt to get some attention.

Hadn’t heard of Kicktraq.  Like I said, I am new to the Kickstarter scene.  I’ll definitely have to check it out.

Don’t get too overwhelmed and take your time to figure out what you want to say first about your project.  And take into consideration the persons who comment and/or send you messages.  They are the ones who want to help you out afterall.

I’ve been working on this story for so long and it’s my aspiration to get it out there for others to enjoy.  Tried in the past to get it published, but it costs a fortune.

Thanks to Kickstarter, I’m getting the opportunity to share my ideas with the world.