Welcome back to another Kickstarter Conversation!  Today I am joined by Naotaka Kumagai, who is here to talk to us about an interesting Kickstarter project called Manga Reborn.  Thank you for joining us today Naotaka.

A pleasure to be here.

As an anime and manga fan your project immediately caught my eye, would you care to tell us about it?
The goal of our Kickstarter project is to localize ten different manga series into English for the first time. All of these series are relatively unknown overseas, so the hurdle may be a high one, but we believe that all of them possess their own unique charms. We are also doing each series in its entirety, so for example, with Black Angels, that means a whopping twenty volumes! When the titles are localized, they will be available to view online and as digital downloads.

Basically you’re trying to be the Comixology of Manga in the US?  Why make your own site and not just publish your translated manga through that existing service?
The original reason Manga Reborn was started as to give lesser-known manga artists in Japan a way to send their work out to a larger audience. Comixology is great for US comics, but does it have a presence in Japan? Not really. If you went to a starving artist in Japan and told them about Comixology, I don’t think they’d have the courage to make such a sudden leap. Manga Reborn, however, is stationed in Japan, and we have a team of dedicated people who are working together with Japanese publishers and artists to get more manga online for the first time ever. We also invite artists from around the world to join in on the community and work side-by-side with professional manga artists from Japan.
We also want to let the artists take charge at Manga Reborn. Artists can set their own prices for their comics, the manner in which it’s distributed, and basically how people view their manga. We want this to be a community where artists can congregate and push manga beyond what it currently is. This is currently happening with big name artists and their publishers, but what about the little guys? There is a lot of great undiscovered content in Japan, and we want to make it easier and more comfortable for Japanese artists to release their work to the world.


I remember years ago how people were doing fansubs of anime and downloading them wherever they could much like they still download scanlations of manga.  One of the early sites to host streams of these fansubs that eventually went legit was Crunchyroll.  Honestly since they came along my fansub downloading has dropped to nill, are you trying to offer that kind of legitimization of digital content from Japan but for manga instead of Anime?
That’s exactly what we’re trying to offer. Both fansubs and scanlations are labors of love. People find an unreleased series that they like, and it’s so good that they can happily work hard to localize it into another language and release it with their friends. It’s an awesome phenomenon. Now, what if this same thing happened with the addition of direct correspondence with the creators themselves? What if great manga could be legally localized by true fans, and true fans alone? Imagine if Crunchyroll had the directors and scriptwriters of anime handling their own content and giving thanks and feedback to the subbers. This is what we’re doing with Manga Reborn.
At Manga Reborn, any user is free to take a stab at translating or scanlating a series. After finishing a chapter, they can contact the author directly and send their thoughts, or ask for clarification on certain parts. Imagine if Oda Eiichiro was able to converse with fans about One Piece every week and clarify certain lines! I think it opens the door to a ton of great possibilities.

Why go for a “per issue” cost instead of a subscription service?  Is it a creator/publish demand or just the traditional pricing model for manga?
Currently, this is because we want to give artists freedom to set value to their work as they see fit. In the future, depending on how our community goes, we may think about implementing some sort of subscription service, but right now, we really want to give artists as much freedom as we can.

I understand you’re trying to bring over manga that isn’t well known outside of Japan, but do you think you might be too obscure to western audiences?   I know I’m not fully aware of everything anime/manga but I know I have a higher degree of awareness than your average consumer and I have no clue about any of the ten artists whose work you’re offering with this Kickstarter.  Was that the intent?
While the titles and author names may seem unfamiliar at first, I think readers will find themselves in familiar territory if they take a peek. For example, we have two series that were featured in Shonen Jump, one in the 90s, (Hisoka Returns), and one in the 80s (Black Angels). The latter, Black Angels, is actually one of the grand-daddies of what we like to call the “Jump battle manga.” Fist of the North Star, Dragon Ball, Yu Yu Hakusho, One Piece, Bleach, Naruto… before all of those, there was Black Angels, and the influence is very evident. As a fan of Jump battle manga myself, Black Angels was a treat to go through, and I hope more fans will come to discover its charm.
Currently, we host a lot of classics on Manga Reborn. But another manga on the list is Sato Shuho’s “New Give My Regards to Black Jack,” which is a very recent piece from a fairly popular current author. I consider NGMGTBJ to be a very sociologically important work, and while it focuses mostly on the medical world, it can also teach readers a wealth of information on modern Japanese society, and how people in Japan deal with things like family and interpersonal relationships. I daresay it’s an essential addition to anyone’s collection.
So, basically what I’m trying to say is, we haven’t just pulled these randomly out of our vault. They’re all strong pieces, and they’re only a taste of what’s yet to come. 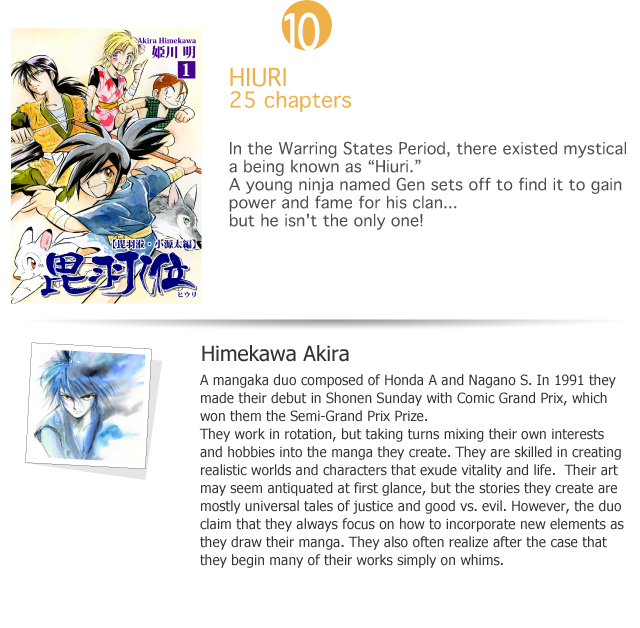 One of the big things I suggest for every Kickstarter project is a budget breakdown.  Presenting one of these to your potential backers lets them know you’re serious about the project and have a plan for the money.  Why does your project not have a budget breakdown?  Where is the $6,000 scheduled to go?
Thanks to the many manga fans who have been supporting us, translation is partially under way for this project. However, compared to translation, the actual scanlation (typesetting) takes much more time and resources. We're trying to build Manga Reborn into a site where users can work with manga artists, but we haven't gotten completely off the ground yet, so this Kickstarter will serve as a basis for us to get some quality work out and show the world the possibilities of our platform. Therefore, the donations will go towards the tens of thousands of pages we are planning to release in English.
Additionally, some authors/publishers require that we use one of their proofreaders to look over the work before it gets a wide release, so it’s hard to come up with a solid budget breakdown when we can’t be sure of what each party will require of us. We think that $6,000 should be enough supplement it all, however.

Your site is already live, what changes if the Kickstarter succeeds?  What if it fails?
If this Kickstarter succeeds, it will mean the instant release of ten quality series that we do not currently have the means to scanlate in proper quality. So far, there is no previous example of an important series from a big publisher that has been released officially solely through fan support and garnered a lot of attention -- we are trying to make that a possibility.

There is another large benefit to this. We have some series on our site that have already been released to the public, but no real proof that a Western audience wants to read them. If this Kickstarter is a success, and we can prove there is a demand, then we'll be able to convince publishers to let us host even more series for fans to read and translate. In Japan, things like this are absolutely unheard of, so we're really trying to create a new precedent here for the sake of all manga.

On the contrary, if this project fails, it will only prove to the publishers that there is not a significant enough audience who is willing to financially support the localization of various types of manga. In other words, to them, it will appear that users are only interested in reading manga for free on illegal sites, and that there is no real business opportunity here. That would be a very sad message to send to them, since we really believe that this is NOT the case. But unless we can change publishers' minds somehow, it means that a lot of future series will never get a chance to go abroad.

Still, even if this project fails, we will still do our best in other areas to try and create a better future for manga.
How did you discover Kickstarter?
A Manga Reborn user introduced it to us! Manga Reborn is really being supported by a wide range of people, and we’re eternally grateful!
A key part of successful Kickstarters is backer participation and how to convert a potential backer into a full backer.   How are you engaging your backers?  What kinds of things do you have planned for updates to give notice to those who just hit the “remind me” button and surf on?  Interviews?  Videos?  Stories from the project?
We’ve been posting new content weekly on our Facebook page, and we’ve been trying to branch out to other areas to gather people to the Manga Reborn Kickstarter page, first of all. We’ve received a lot of great feedback from our backers, and we are working our hardest to implement it all! Please just wait a little bit longer!
What kind of media attention have you received with your project?  How are you spreading the word?  Facebook?  Twitter?  Google+? Youtube?  Advertising?  Are you using Kicktraq to track your progress?
Currently, we are working on reaching out to foreign media. We have a Facebook page with 500,000 supporters that we've been reaching out to, as well as the Anime News Network. We also have a lot of Japanese supporters, like the author of Sket Dance, Dangerous, and about 500 other authors with serialization experience. Satonaka Michiko and Chiba Tetsuya, two famous veterans of the manga world have been supporting us, in addition to the Digital Manga Guild and the Japanese Manga Artists Association. Sato Shuho, the author of Give My Regards to Black Jack, has also assisted us a great deal. We've also been translating his blog into English for free viewing. All these people and more have been generous enough to support the Manga Reborn project.

Do you have any tips/advice would you give to anyone looking to start a Kickstarter?
Make sure you have a solid plan for getting the word out. Exhaust all resources, all avenues, but do it with heart, and speak your message honestly. And never give up!
Thank you for spending your time with us!  Do you have any final thoughts for our readers?