Welcome back to another Kickstarter Conversation!  Today I am pleased to be joined by Darren from Haptix Touch to talk to us about their amazing Kickstarter project Haptix: Multitouch Reinvented. Thank you for joining us today!


Thanks James, I’m happy to be here!


I’m extremely excited by your project, would you care to tell us a bit about it?


Absolutely, I’m excited by it too! Haptix is a device that turns any surface into a 3D multitouch surface. What this means is that you control your computer by tapping, pinching to zoom, or swiping to scroll on any surface just like you would on a normal multitouch screen. But even before you touch the surface, you see where your fingers are on the screen. To me, that’s the key feature that elevates Haptix above any trackpad or remote control, since it’s like reaching out and touching the screen itself, while your hands are comfortably rested on a surface. 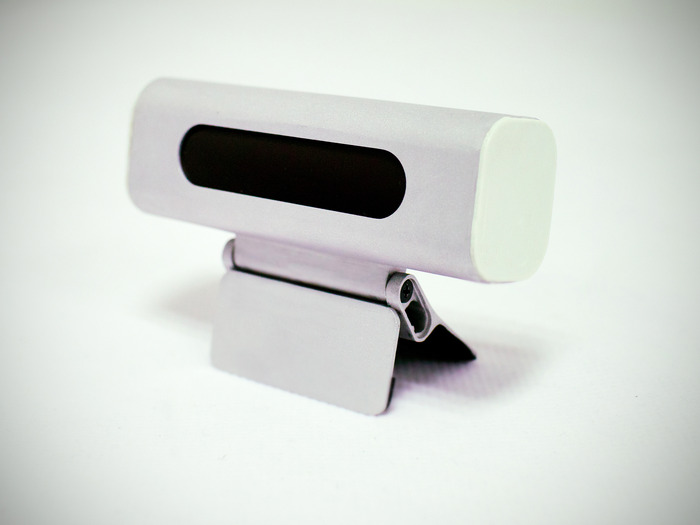 Motion controls are nothing new, with both the Kinect and Leap Motion already out to mixed reviews what makes the Haptix different?


Traditional 3D sensors are meant to create a new form of interaction, and they have a lot of potential for specific tasks such as modeling clay or having fun in front of your TV. However, I think that a lot of the disappointment in 3D sensing comes from expectations about using such devices to interact with our computer for things they’re not meant to support, since you’ll face problems like gorilla arm or imprecise control, making the entire setup very impractical.


However, Haptix is about interacting with today’s user interfaces, aka all the programs we’re used to. The tech behind Haptix makes it the first affordable 3D sensor that can be pointed down and work on surfaces. This means that instead of raising your hands and poking them in the air, you’re resting them and tapping on a surface. This eliminates problems like gorilla arm and imprecise control. As for usage, Haptix integrates with your system and doesn't require custom apps to work, because we want to make it more natural to interact with today's programs, not tomorrow’s.


As someone who uses multi-touch devices on a regular basis the concept makes perfect sense, just move the touch surface away from the screen and down where my hands naturally rest.  What took people so long to do this?  I mean who thinks waving their hands in the air or reaching up to a screen works long term?


Exactly, that’s one of the reasons we developed the concept of “multitouch anywhere”. We’ve seen that multitouch is very, very intuitive, but limiting it to screens means that when you have a tablet, you’re looking down and your neck hurts, or if you have a multitouch ultrabook, you’re reaching out and your arm hurts. And even in both these cases, your hands cover part of the screen.


One of the key things about moving multitouch away from screens, however, is that you need to be able to see where you’re touching. I think that’s an experience you can’t get with normal trackpads or even laser projected keyboard devices, and only 3D sensing makes that possible. 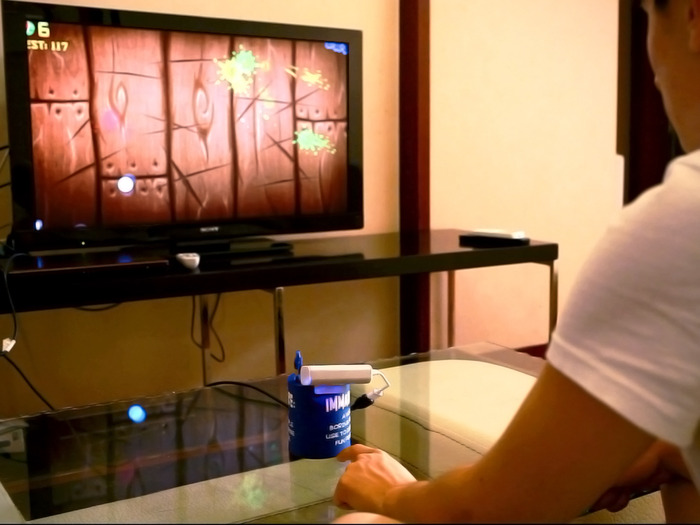 One of the first ideas that popped into my head was putting this on the end table next to my couch and using the arm of the couch to control the computer I have hooked up on the TV.  Would that work?  Is this a wired device only currently?


That’s absolutely what we have in mind. And yes, it’s currently only a wired device, since packing on a battery and wireless modules increases the bulk tremendously.

Another question that springs to mind is, how flat a surface do you need to make this work?  Could I aim it over my leg and use that?  Does it have to be a horizontal surface could it be a vertical surface like a whiteboard or my chest (for presentations)?


It needs to be a flat surface for now, since computing the curve of the surface and compensating for that drains resources. 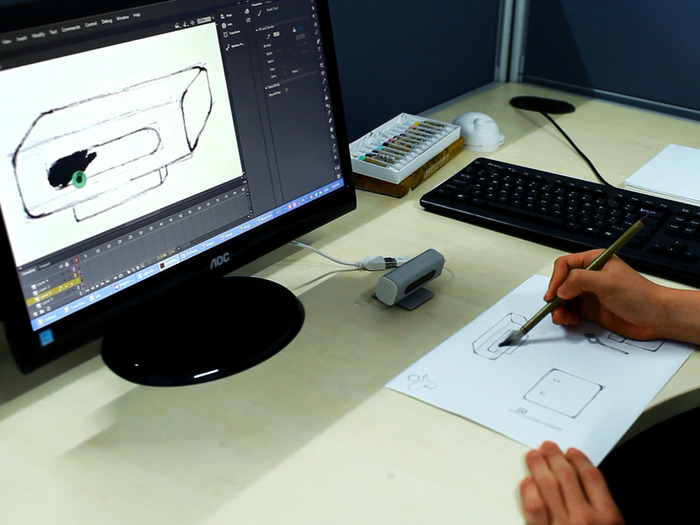 Looking at some of your updates you’ve announced some very interesting things, first off the $150,000 (which you’ve almost hit congratulations) of a pressure sensitive stylus and secondly the addition of a ten key keyboard replacement concept.  Both of this additional features bring up a key question, just how complete is Haptix?  Is it ready for production?


I think the most accurate answer would be that it’ll never be as ready as we want it to be. Both updates you mentioned were just some examples of Haptix’s potential, and there are so many more features we want to add to Haptix that we’ll probably never be done. However, we do want to release Haptix as soon as possible, then add features through regular software updates, so what we’ll ship is far from the final version of Haptix. In terms of hardware, we’re blessed to have some incredible mentors who’ve done it all before and who, it seems to us, know all of China. It’s really helped us with production so far, and there are a few more steps before we’re confident shipping a quality product.


The Project mentions an SDK (Software development Kit) is in the works, but how much customization will we be able to do without the SDK?  For instance in Blender (a 3D modeling program) would I need to use the SDK to come up with a “rotate view” gesture or will the standard software work?


One of the things Haptix will include is a control panel, where you can toggle between different features, such as multitouch mode, mouse mode, and others. It’s definitely possible to assign different functions for gestures or even different fingers. 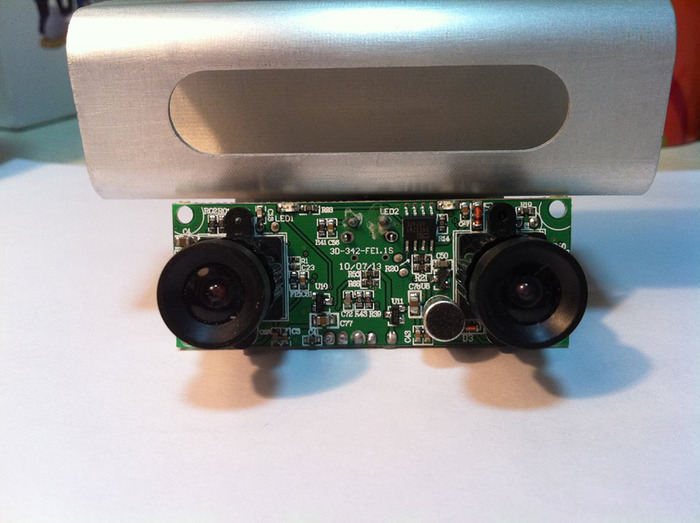 One of my biggest concerns with Kickstarter projects, especially the ones that really excite me, are budget breakdowns.  Nothing puts a damper on my enthusiasm than a project without a budget breakdown as they prove you’ve planned out how to spend the money and are that much closer to making your project a reality.  Why does your project not have a budget breakdown?  Where is the $100,000 going?


Honestly, because a lot of the agreements we have with suppliers and manufacturers are under mutual non-disclosure agreements, which is quite crucial when manufacturing in China.


Your project seems ready for the big leagues, why bring it to Kickstarter and not to one of the major hardware companies like Logitech?


I’d certainly love to see Haptix evolve through cooperation with major hardware companies, but I think we first need to create a community of people who can help us develop a product they enjoy using. Kickstarter is perfect for that purpose. 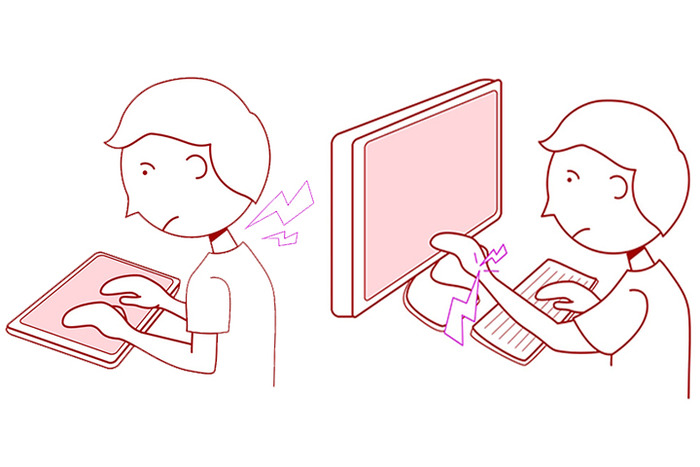 
Hm, I honestly don’t remember, but I’ve been an avid backer of Kickstarter projects for some time now, and can appreciate the power of a strong community in shaping a good product. 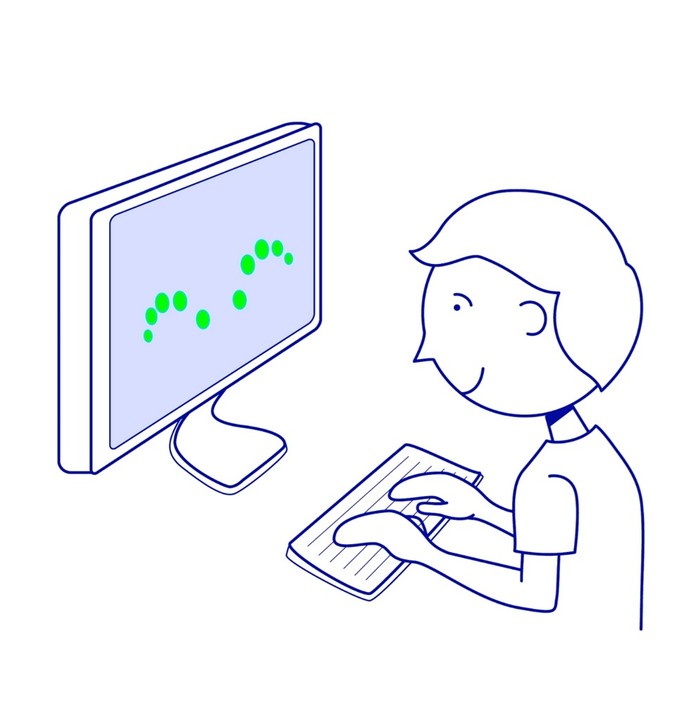 
We received quite a fair bit of press coverage, and we’ve mainly asked our friends to spread the word through social media like Facebook or Twitter. We make use of plugins that work similar to Kicktraq to monitor our project in real-time.


Wow, too many. I think the primary one is that you should look past Kickstarter as a platform for funding and think of it as a method of getting “product ambassadors”, people who will give you feedback and help spread the word about what you’re doing. Engaging the backers and learning what they think is perhaps the most rewarding part of the campaign.


Thanks for having me! Look forward to bringing Haptix onto your computers.