When the guy in the suit isn't the protagonist, you get The Fall.

Welcome back to another Kickstarter Conversation! Today I am joined by our Canadian friends from Over the Moon games to talk to us about their Kickstarter  The Fall: dark, story driven exploration in an alien world.  Thank you for joining us today!


Thanks for having me, it’s a pleasure!


The fall is a very atmospheric work with some pretty obvious influences and some not so obvious.  Would you tell us a bit about the game and what brought you to Kickstarter.
The Fall is about an artificial intelligence onboard an unconscious spaceman's suit, who must take control of the suit to move said human's body towards medical attention.  The Fall didn't actually have a strong premise when I began work, actually -- it started as a vague idea that making something kind-of "Metroidy" might be fun.  The premise, and anything high-minded came about slowly in it's own time. Perhaps that's the reason why it has so many influences; I love a lot of different games and it seemed natural that this is the type of game that I'd make.
As far as Kickstarter, my goal was to get the game to a polished enough state where it would at least clearly show what I had in mind. Then, if I showed it to people and they hated it, I could simply cut my losses and move on, without sinking a year into a doomed project.  Kickstarter is really just a way of gauging public interest so that I don't waste a whole bunch of time. Thankfully, people seem to be interested!

Episode One is mentioned several times throughout your campaign, which implies there are more episodes planned.  How many do you have in mind?  How long will each episode run?
I have three episodes planned.  Initially, I was targeting a solid 3 hours per episode, as that's more or less what it took me to play through each "The Walking dead" episode. However, after some initial testing, it seems that players are taking a bit more time on average to play through what I have.  If average playtime goes over 3 hours, nobody will be more happy than I.


Being the AI of a suit is definitely an interesting choice of characters.  Where did the idea come from?  Will we ever have to deal with taking care of our occupant?
I hate to disappoint, but the idea just came to me one day out of the blue, in the same way that The rest of The Fall did. Honestly, I know it doesn’t make for an interesting story, but I’ve worked on a lot of projects where I had some high-minded vision or “artistic statement”, and The Fall was the first project where I just kinda forgot about all of that and set out to make something after turning my brain off.  It’s flabbergasting to me that I came up with an interesting premise during such a process, and I can’t really tell you where it came from. I suppose if you’re genuinely inspired by all of the creative work that’s out there, your brain will simply grab what it needs.
As far as what’s going to happen in the story, I’m trying to keep that as nebulous as possible.  I love the idea of uncovering the unknown and I think The Fall needs to be a bit of a mystery if the story is going to work. 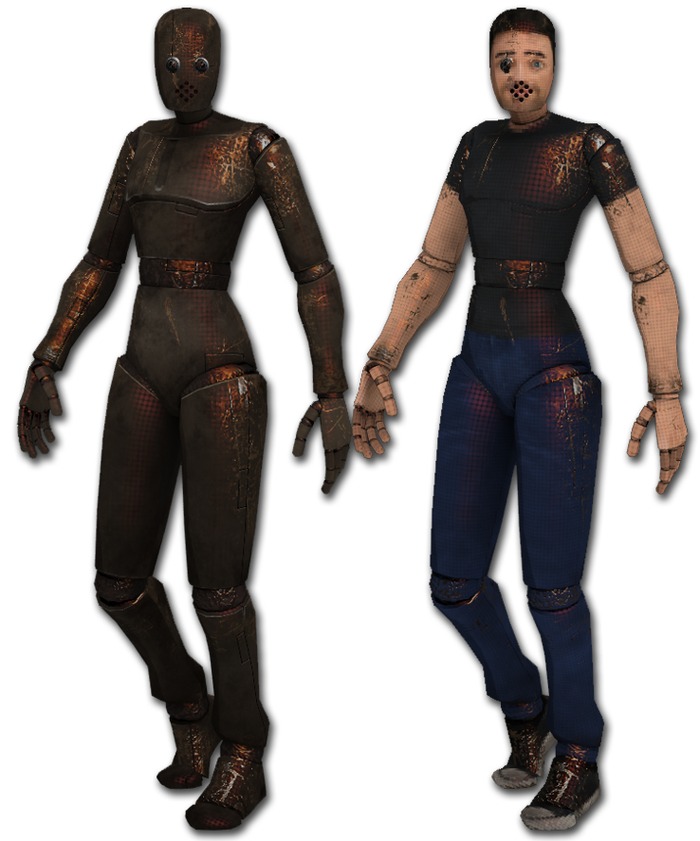 As one of those who do not enjoy platformers or Metroidvania style games, what does your game offer to non-fans of the genre?  Do you think the elements you’ve added to the formula offer enough for these non-genre specific fans?
The Fall isn’t exactly a Metroidvania style game, because those types of sprawling maps don’t work with adventure gaming mechanics. Could you imagine missing an adventure-game puzzle piece and having to backtrack for hours until you find it? It would be an absolute nightmare. Puzzles need to be somewhat self-contained to avoid frustration.  Also, information density is too high in The Fall’s environments to allow for that kind of sprawl. The Fall needs to be large, capture a sense of exploration, and offer some interesting challenges in the form for puzzle solving and fun combat sequences. Hopefully there will be lots to hook players.
You’ve announced that The Fall will be coming to Wii U even without hitting the $29,000 stretch goal, how did that come to pass?  Are you planning on changing the $29,000 stretch goal?
Nope! But launch timing will be affected if I don’t reach that goal, and possibly significantly. Nintendo has actually made it very easy for people like myself to launch on their platform, but there are always costs associated with that kind of launch, such as licensing, labour, QA, stuff like that. I’m committed to bringing The Fall to the Wii U, but without hitting my stretch goals, I can’t promise a speedy release - I may have to make a few sales first on PC/Mac, or hire additional developers and pay them with revshare. If I’ve learned anything in development, its that you can find a way to reach your goals, if you’re resourceful enough. 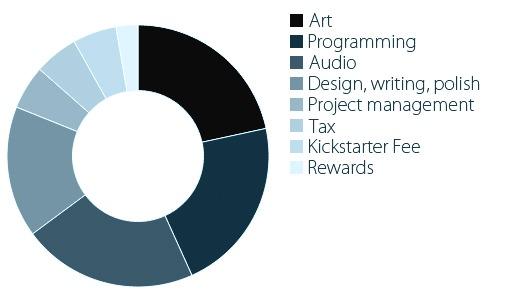 I love your Budget Breakdown because it is very clean and even shows that you thought taxes! My only question has to be, why not solid numbers or percentages?  Did you feel it was too much information?  One of those details getting in the way of a simple message?
Thanks! And this sound silly, but it’s much more simple. I just like minimalistic design, which is also why there’s only one color in the graph. I thought that I didn’t need to include the percentages because I thought that the graph was clear enough without them, given that it represents the $17,000 that’s there.  There’s no doubt that I could have done a full budget breakdown and showed every single dollar and where it’s going, but yes, I suppose that would have been unnecessary information. My gut told me that people want to know that you’re competent and are thinking about these important issues, but they don’t necessarily want to audit you. No complaints yet!
With the Ouya also being a Kickstarter project it only makes sense they would try to court developers like you to their platform.  Did you ever contemplate going for their “Free the Games” matching funds program?  How about now that they’ve changed the rules to get the money?
I did consider it, but I don’t think it’s for me, for a few reasons. Lets say that I reach a goal of around $30k. (hopefully more, but if we’re talking numbers, lets be slightly pessimistic), that would mean I could count on another $30k from them, and would be unable to launch on Mac, Linux, or Wii U for 3 months. That’s three months where my Ouya sales would have to justify revenue on those 3 platforms, minus 30k. Considering that your first few launch months are crucial for sales and everything after that plummets, and also, that the way I understand it, nobody’s selling much of anything on the Ouya right now, I’m not sure it’s the best strategy.  I love the idea of the Ouya, and as a backer, I want to see it succeed, but I also have commitments to my backers and want to finish The Fall.  Right now, I think that means choosing the path that opens up the game to the most people and has the best chance of funding the future two episodes.Did you wait specifically for Kickstarter to open up to Canadian projects or did it just become a happy coincidence of timing between you being ready for a campaign and Kickstarter opening up to Canada?
It was a happy coincidence. I was actually working hard to try to get on Kickstarter before they announced, and it was looking grim. My girlfriend is a UK citizen and I have a few friends in the states, but Kickstarter did a fantastic job of making it difficult. I’m very glad they came to Canada.
How did you discover Kickstarter?
I honestly don’t remember.. I think I saw some news article on the subject. It came into the forefront of my awareness when Double Fine launched their project, as I think it did for many gamers.
A key part of successful Kickstarters is backer participation and how to convert a potential backer into a full backer.   How are you engaging your backers?  What kinds of things do you have planned for updates to give notice to those who just hit the “remind me” button and surf on?  Interviews?  Videos?  Stories from the project?
I’ve been working like hell to come up with content, but I’m realizing that a huge, huge failure was to only plan the launch beforehand, and not my updates as well. I put together a gameplay video, and I just did a video interview with The Fall’s sound designer (and my good friend) Brent Silk, which I will soon be editing and releasing. I’m also putting together a preview build that I can send to preview sites and youtube channels. Hopefully there should be enough content to keep people engaged, but I could absolutely be doing a much better job, and won’t be able to produce as much content as I should have. Ah well! I suppose that will go into the post-mortem.
What kind of media attention have you received with your project?  How are you spreading the word?  Facebook?  Twitter?  Google+? Youtube?  Advertising?  Are you using Kicktraq to track your progress?
Social media has been incredible, and I’ve been blessed to have many supportive friends who have shared the project. Also, I’ve been fortunate to have been featured on Kotaku, Rock, Paper, Shotgun, PCGamesN, Eurogamer, Indie Statik, Joystiq, and as of this morning, a number of Nintendo blogs that I have yet to inventory. I’m overwhelmed with the support, to be honest. And yes, I check Kicktraq every once and awhile, but it’s a bit of crackhead fantasy -- “Oh look, my game is going to make 80K” -- it’s a nice thought, but it hasn’t helped me much yet and probably isn’t very accurate. Ah, who am I kidding. I check that site every day.
Do you have any tips/advice would you give to anyone looking to start a Kickstarter?


Sure -- do as much research as you possibly can. When you hit the “I don’t want to do any more research” wall, keep going. Nothing short of a good campaign will make you any money. Also, read this link and do what he says. Don’t be afraid to iterate. I made five (5) different copies of my Kickstarter video. I have versions where I’m a “future historian” wanting to make a “history piece”, while standing in front of a sci-fi city, which I threw away because it just wasn’t quite working. I even have an animatic where I pretend to be a creepy fan claiming to be Tim Schafer, because of how much the Kickstarter community seems to love him.  Use your friends and get feedback. Research, try something, take what works, iterate. That’s what I did!
Thank you for spending your time with us!  Do you have any final thoughts for our readers?


Thank you! And I do not, other than the usual plug, of course. The Fall will really shine when I have the resources to polish it.  If you guys like the project, consider checking it out and backing!  Ah, shameless self promotion... It gets easier every time I do it.
Thanks again and I hope to hear good things from your Kickstarter!