Thank you all for joining us for another Kickstarter Conversation!  Today I am pleased to be welcoming back Sean “Cheeks” Galloway whom you may remember from the Gumshoes 4 Hire Kickstarter a few months back.  Well he’s back with an all new project, thank you for coming to talk to us again Sean.

Hey, James!  It’s good to be back.  Thank you for having me.

So now that Gumshoes 4 Hire is done and out the door you’ve returned to Kickstarter with a new project called Bastion’s 7.  Can you tell us a bit about the new project?

Definitely! The Bastion’s 7 project is about a boy named Kai who doesn’t have a family he can come home to.  Sure, he has a foster home, and to look over him is a grandma-like guardian called Ama. But he’s wanting more. If he can’t have a mom or dad he’ll try to make a home with the organization called Bastion’s 7.  Bastion’s 7 is an elite team of soldiers that defend sectors around the universe.  But before Kai can ever be part of the B7 crew he has to train hard.  He trains as much as he can via his “How To Punch People In the Face Properly... (and Beat Up Bad Guys)" Kung-Fu Handbook, as well as work as a delivery boy for Ama.

The B7 universe takes place in San Diego, but not a San Diego we’re used to.  Chinatown has taken over the city  on a parallel Earth that has a mixture of different species living together.
Kai and the world of Bastion’s 7 is loosely based off of my experiences whether my upbringing, ethnicity,  to where I lived over the years.


The project page mentions this is a kind of mash-up of all the fun cartoons and comics of your youth, do you have some examples?

When I put Bastion’s 7 together I kept in mind of what I loved about Gatchaman, Bionic Six, Star Wars, and Pokemon.  What I loved from these amazing properties is the transformations, the caring family moments during or outside of battles, and to intermix species to live amongst each other. 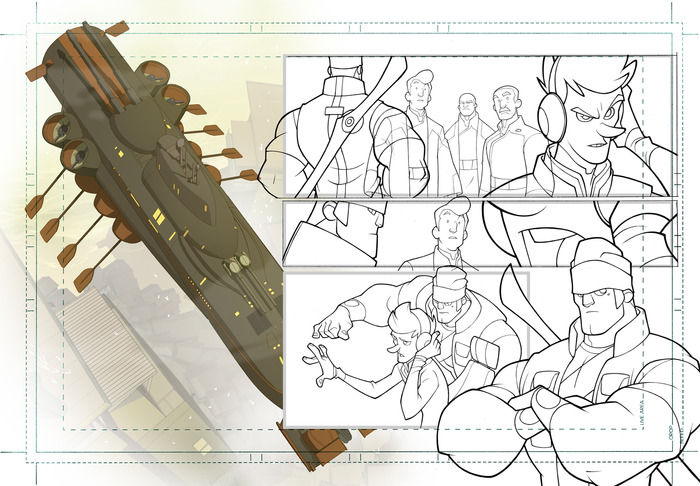 So besides being a love song to your youth, where did the Bastion’s 7 story come from?

Not to get too deep, Bastion’s 7 comes from a real place in my life.  Being Asian, growing up was tough for me because some of the cities we lived in weren’t open minded to new cultures.  We moved quite a bit because my pops was in the Air Force, so it was very hard for me to fit in.  On top of that I lived in a very physically abusive household up until I was a young adult.  There’s been times I ran away and only had my “How To” Kung-Fu guide hoping to one day become a Kung-Fu Master.  HAHA  I later joined the Navy and was stationed in San Diego, and that was when I was exposed to people that didn’t judge or care what one’s ethnicity was.  I instantly loved San Diego and lived there for 15 years.  That’s when I noticed San Diego’s Chinatown got gipped! HAHA  They may have had 3-4 buildings in the downtown Gaslamp district, so when creating B7, that’s when I expanded it to overtake the theme of the city.

Anyhow, Kai is basically me.  And he’s gone through a lot, and he feels he will be welcomed into society as well as find his home amongst Bastion’s 7 if he can be accepted into their academy.


There are oars on that flying ship/thing... where did that come from?  I see a hoverboard are there flying cars?

When you’re designing a parallel Earth, then anything is possible.  When I designed “Ol Betsy” I wanted to see what I could do pulling inspiration from Yamato’s StarBlazers ship design, yet keeping it fresh.  So basically in our universe, there’s trouble everywhere, so the vehicles needed to be equipped and ready to handle any situation.

I admit the oars originally was just for kicks and because of the approved reaction I received for it, it is now part of the design.   I guess you can say that’s what ya get when you mash up a submarine, battleship and saipan!  :)

The flying cars have to have the capability to fly.  But only the rich can afford such a vehicle.  These vehicles are used to get to and from the floating islands where only the people who can afford to live on them. 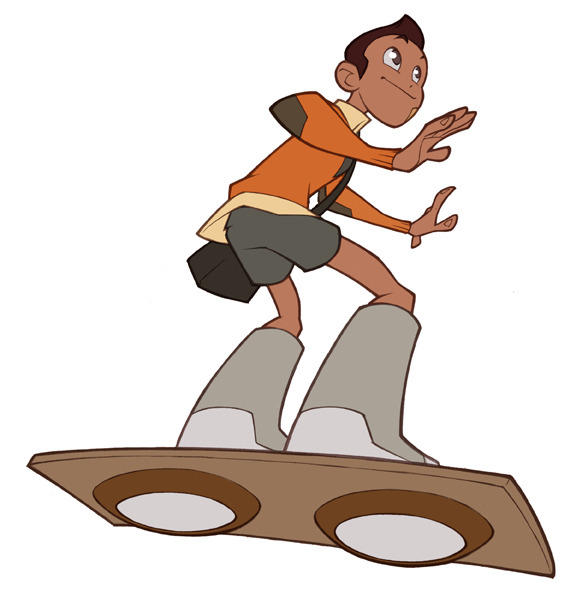 Looking back at the Gumshoes 4 Hire Kickstarter page Bastion’s 7 was mentioned in the “preview book,” and that was back in February.  Just how long has Bastion’s 7 been in the works?

Bastion’s 7 has been in the works since the early 2000’s.  The TableTaffy Preview book is coming along nicely.  It’ll introduce more projects that we have going on.

You were kind enough to let me see the results of your last Kickstarter and I have to say I really enjoyed it.  Yet even with those 50+ pages you ended up with a cliffhanger ending!  Are we going to see a similar style of storytelling with Bastion’s 7’s similarly sized book?  Will you be leaving us wanting more, and if so how are we going to get it?  Wait for the next Kickstarter?

HAHAHA  I am very happy you dug it, so you’re very welcome! For the Kickstarter goals to be achievable I have to break up the stories, they are self contained but with a lil cliffhanger to draw the reader back.  But what I plan to do is and for the sake of affording the cost is do these stories via Kickstarter.  This way I can tell the story I want to tell before it gets tainted whether good or bad. 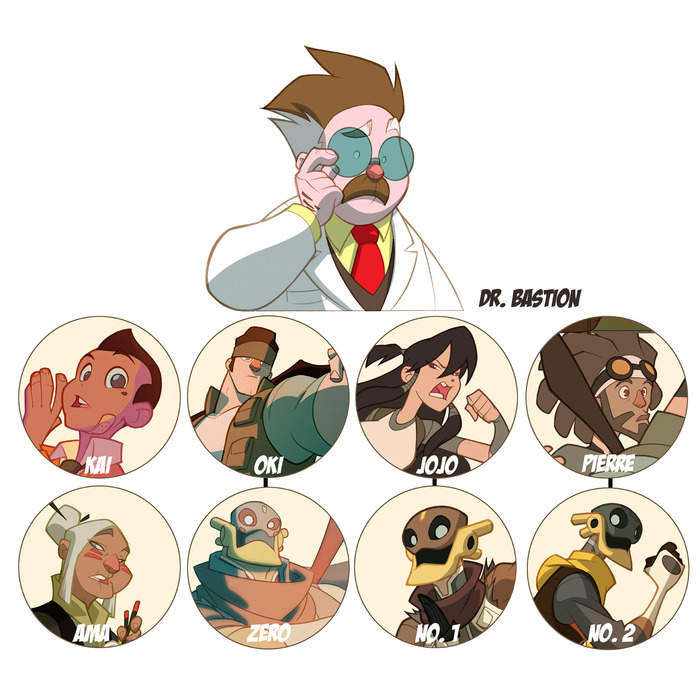 Speaking of your previous Kickstarter, what did you learn from it’s successful run that you’re bringing to Bastion’s 7?  Do you think you’ve figured out the perfect Kickstarter formula?  You did bring in twice your funding goal last time after all.

I had a tough time (and still am) tracking down backers to cover shipping for Gumshoes 4 Hire.  This time around I took that out of the process, incorporated the shipping, and created a double version of the reward, 1 for domestic and 1 for international.  I haven’t figured out the perfect formula, but I am also learning more on the B7 Kickstarter to try to avoid and narrow the focus down for my 3rd Kickstarter.

Great question.  It’s one everyone should know.  To make 2 hardback books qty 2000 each book and slipcases, it cost nearly 20k.  The cost to pay everyone involved on the creative side was about 17k.  Then there’s the other stretch goal items that need factoring in.  Going into the Bastion’s 7 Kickstarter, I wanted to make sure I found a middle spot of what I asked for for G4H and what was actually needed, so that the cost out of my pocket isn’t so demanding.  I gotsta make sure I’m not spending our food and mortgage monies. :)

As an experience Kickstarter creator do you have any tips/advice would you give to anyone looking to start a Kickstarter? Pitfalls to avoid?

I think the best advice I can give is to maintain constant marketing of your project before, during and after the campaign.  If you believing in your own creator owned property is oozing from you, then it will be infectious and others will catch the bug.


My pleasure!  I really hope from what I touched base on about Bastion’s 7, that it shows you how near and dear this project is to me from a personal level rolled into what I loved watching or reading while growing up.  Like anything in life, strength in numbers. 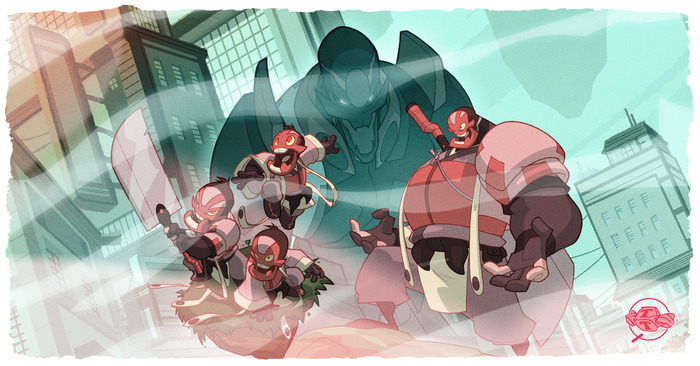