Welcome back to another Kickstarter Conversation!  I’m pleased to be joined by Paul Schneider who is here to talk to us about his Electroluminescent Helmet Kit.  Thank you for joining us today Paul!
Thanks James, I’m excited to be featured on your site.

Electroluminescent is a very long and hard to say word.  What does it mean and why should people be excited by it besides being a really cool looking light source?

Yea, it really is. The name was tricky because ‘EL’ is somewhat known for the EL Wire products and I wanted to keep that association.
I think if people knew a fraction of the things that are cool about Electroluminescent Tech we’d see it in widespread use. There have been case studies of Electroluminescent vs. Incandescent lighting. The most notable I think is the USAF study referenced in the project description. They found it to be four times the visibility distance and more energy efficient. That’s pretty good.
Visibility through fog or haze is awesome due to the narrow bandwidth of the light produced. Basically it works very well with the human eye.
Imagine EL road signs or caution signs with a little solar panel on top and a battery like the emergency phones on the highway. That’s an easy one. Most EL devices are waterproof or easy to make waterproof, so how about marine applications? The list goes on.. 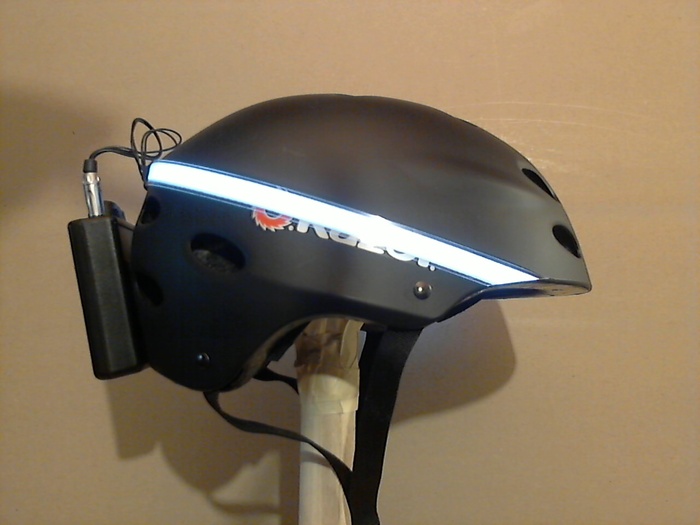 Since EL lighting systems are not new and are obviously good at increasing visibility, why isn’t there already a helmet system out there?  What are the limitations to current EL Lighting options?

Good question. The main reason, and this is just my opinion, is probably legality across all states. You can buy blinky LED things for your bike at Walmart that aren’t legal for on road use. This is where I’m spending a lot of time currently. Particularly if there is a distinction between on-vehicle and on-rider. All the feedback from Police Officers on the street has been positive, but unofficial. That’s probably enough to scare off Specialized, Bell, Shoei & Arai. As far as add-on kit’s they just aren’t there. You can find components on a number of websites to build your own but there are a couple of other things keeping these from working right as a helmet safety kit.

The first has got to be the wiring. You mentioned you had a separate question for that so I’ll save my wiring comments.
The other obstacle is that to light the EL strips the magnetic coil resonates at high frequency. This creates a very high pitched noise that would probably give you a headache. Eliminating the noise is the main reason my power pack is the size it is. I’d love to have it smaller but then it wouldn’t be silent.
I’m working with some really talented people on a new power pack that should solve both issues but its months out at least.

What made you create your prototypes and begin working on this design?

The first time I saw EL tech at Burning Man I was blown away. Since then I’ve made several helmet mods using EL Wire that were cool but just not visible enough from a distance of over 10m or so. Then EL Tape came out and I did another helmet with that and everywhere I went people are asking about it. At traffic lights, at the grocery store, at 7-11, out the window of their cars, etc.
Seems like the kind of indicators you’d want to see with a new product. So, now I’m in debt to my eyeballs but I did get an amazing amount of help and guidance from friends to get this thing to market.

How heavy are the current prototypes?  That battery pack looks like it’d be an annoying weight on a helmet.

The battery pack is 4.7 oz with the 9v in it. I don’t really notice it on the motorcycle helmet. On a cycling helmet (which they now weigh almost nothing) you’ll want that near the top so it doesn’t dip the helmet back. Or even better, use the extension cable and keep the power pack off the helmet completely. 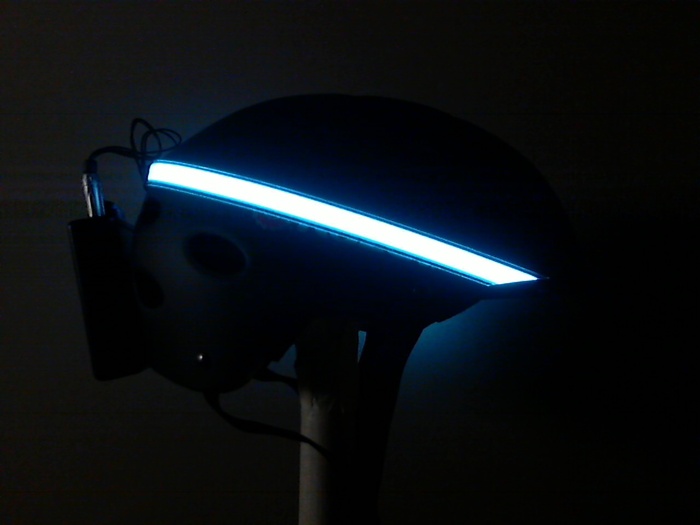 One of the design goals for your system was to “It had to have a single power connector like you'd find on any other consumer device, not like inside your computer.” Why is that?  What kind of power connection do EL Lights usually have?

Any driver and/or tape you order online from whatever site will come with something that resembles a fan power connector inside your computer. Just leads with a plastic sleeve around them. No strain relief, not very durable at all. I can’t think of a single mainstream consumer device that has that flimsy of a connector. Can you imagine a parent putting something like that in their six year olds hands? Broken in 20 minutes. So to me, without a new connector it’s not ready for mainstream.

One of my biggest bugaboos right now is budget breakdowns.  Every Kickstarter should have one to prove that the creators have thought out how to actually deliver on their ideas.   I notice you don’t have a budget breakdown listed, why is that?  Where is the $10,000 planned to go?

A good friend of mine at Adobe recommended it at lunch one afternoon when I told him about the idea. Thanks Chris! 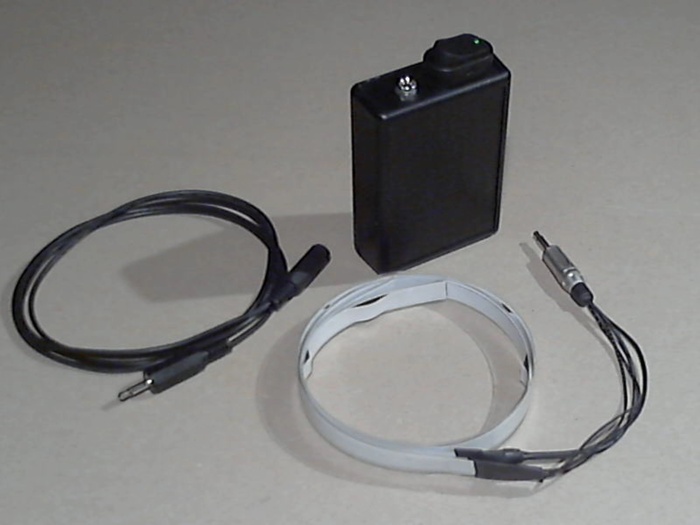 A major update was last week when I finally cut a deal with an industrial EL manufacturer to use their connectors right at the tape. They didn’t want to sell them to me separately (patented) but they’re really awesome. So now I’m getting tape and connectors from them and eating the cost increase because it makes the unit so much more durable. So much so that I can warranty against mechanical failure for a year. Not something you see a lot of on a Kickstarter project.

Right away there was a cool article about the project on TechHive. I did loads of press releases to various sites as I learned of them. I got a really huge amount of support from friends and friends of friends on Facebook. EL Helmet is live there and elhelmet.com currently refers people to the Kickstarter page. I did get some traction from Kicktraq as well.
A lot of my focus this week has been engaging City and State Agencies regarding legalities, and this could easily make or break the product. No pressure at all.. (Ha-ha).

Have a marketing budget.
There are no tags on your project. The Kickstarter search engine uses words in your short description so make sure they are present.

I was on the fence about using Kickstarter for a while. Regardless of the outcome I’m really glad I’m doing it. It’s intense. I’ve learned a lot and the thing is only half way through the first part!
I’ve been a motorcyclist for 20 years and this technology makes that safer. My good friend’s Stepson almost never used to wear his helmet on his scooter, now he wears it all the time. So if the technology gets exposure and products come out that make a lot of people safer doing what they’re doing, that’s just cool. Could be me that brings it or somebody else. Either way I’m happy.

Thank you James!
Best of luck to you sir.