A Campaign That Cares About it's Backers and Characters: Destiny Fails Us


Welcome back to another Kickstarter Conversation! Today I am pleased to be joined by Amelia Hanks and Tyler Cole from Destiny Fails Us to talk about their Otome Game Kickstarter.  Thank you for joining us today you two!


Thanks for having us; it really means a lot that we could do this interview with you!


I’d like to start off by thanking you for being a reader of the blog.  It’s always good to see readers become Kickstarter creators!
No, thank you for running this great blog! It really helped out to read through your interviews while I was researching Kickstarter information.

Why don’t you tell us a bit about Destiny Fails Us both as a webcomic and as the Otome Game Kickstarter.
Destiny Fails Us is a semi-autobiographical work based on the events of Tyler and my lives.
In 2011, I started working on this webcomic, with Tyler’s support. It started off, as many people have mentioned to me, very reminiscent to Lucky Star, a series that followed several girls going through their everyday lives. Nearing the end of Chapter 2 in the webcomic, I started pulling the series in a more story oriented direction.
In the winter of 2013, I started working on the otome game. After putting a few months of work into it, Tyler and I discussed about where we wanted to go with it. I wanted to make it a fully-fledged game, but I can’t do that without help. I worked all summer long to finish a demo and research kickstarter projects before I launched on September 14th.


What is an Otome Game?  Why choose this genre of game for Destiny Fails Us?
An otome game is a visual novel that has a female protagonist, and is made in mind for a female audience. Since Idril is the main character, and the game follows her life throughout high school, family, and friends, based my own experiences; I felt that the genre fit very well for Destiny Fails Us. And although the game is made for a female audience in mind, I’ve had quite a few males enjoy the demo, still being able to relate to Idril and her problems.
What makes Destiny Fails Us the perfect setting for this kind of game?  How long have you wanted to make this story into a game like this?
Idril has many choices that she can make in her life, which allows me to explore very different routes that she can take. She has obstacles in her life that many people can relate to. The cast in the game also interacts with each other and also affects the story in different ways.
I feel like Destiny Fails Us is a perfect atmosphere for the story I want to tell. I’ve wanted to make a game for Destiny Fails Us for a very long time, and with everyone’s help, I’m finally able to go after my dream.
You are obviously a well-informed creator who has read my past comments about video game Kickstarters having Demos as your project not only has a Windows Demo, but one for Mac and Linux as well!  How important do you think it is to have a Demo ready to go before coming to Kickstarter?  Do you think it’s helped you convert watchers into backers?
I would have to say that having a demo ready is one of the most important parts of my campaign, and it has definitely helped. I really wanted to give people viewing my project something that they could get their hands on before they make the final decision on whether or not the game is for them. I even added a link at the end of the demo that leads directly to my Kickstarter Campaign and other social media. I spent so much time on getting the demo ready and I feel it really shows in my work.  I hope people can see just how much this game means to me.
What’s this? You’ve also got a budget breakdown under your “Why Kickstarter” section?  Aren’t you just the perfect Kickstarter creator in my book!  Heck you’ve even got a “New to Kickstarter” section, now that’s going above and beyond!  How much research did you do before launching this campaign?  How much preparation did you do both on the project itself and with your social networks to drive traffic?
Haha, I’m really glad you think so! I really wanted to be open about why I’m reaching out for help, and I wanted to make sure that I had as much information about the process easily accessible.
I’ve been researching constantly comparing different projects since early February, trying to soak in as much information as possible. I took lots of notes on things that I personally thought were good and bad in over 100 projects. I searched all over the internet, reading interviews (like the ones here!) and creator’s blogs so I can get an understanding of the mindset it takes. I showed Tyler all of the information I had been compiling and we went over everything together multiple times when we were making decisions about the Kickstarter Campaign.
Before I launched, I tried to keep a balance between letting everyone know there was a campaign coming up, and not bothering anyone with too many updates. Once Tyler and I decided on a date and time that we wanted to launch the campaign, we announced it on every social media account we have. In the week before our launch, I made sure to upload our demo (with the link directly to our kickstarter inside the game) and write up all of the different forum and blog posts I needed so when it was time to launch I could have everything ready and up as soon as possible.
Do you currently have a Steam Greenlight Campaign going that we can vote on?
Unfortunately, no we don’t. However, I’m going to try entering Greenlight sometime during the development of this game. If I am able to get my game on Steam Greenlight, I will post updates to the Kickstarter as well as my social networking sites. 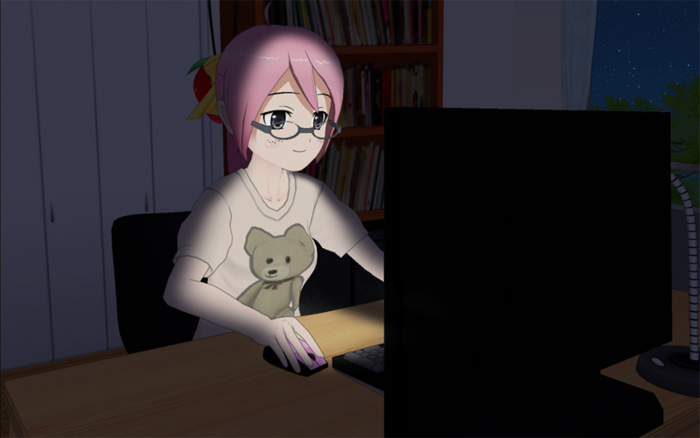 How did you discover Kickstarter?
I actually heard about Kickstarter during the start of the Fate Core campaign. Tyler’s brother donated to the campaign and received a PDF of their rulebook, which we used in a tabletop campaign earlier this year where Tyler ran a game inspired by Megaman.
A key part of successful Kickstarters is backer participation and how to convert a potential backer into a full backer.   How are you engaging your backers?  What kinds of things do you have planned for updates to give notice to those who just hit the “remind me” button and surf on?  Interviews?  Videos?  Stories from the project?
I’ve been very talkative with the people on my social sites, and in the comments on the project. I’ve also messaged every person who has become a backer, personally thanking them and asking if they had questions. I’ve received some fanart that I hope to share and include some stories about Destiny Fails Us in some updates.
What kind of media attention have you received with your project?  How are you spreading the word?  Facebook?  Twitter?  Google+? Youtube?  Advertising?  Are you using Kicktraq to track your progress?


I’ve received several reviews for the demo, from people like Otome Sweetheart, Otome-Garden, and Mina’s Madhouse. Someone also recorded a let’s play of the demo and posted it to their youtube account. I’ve also received a lot of support from Tumblr, since a well-known Otome Games blog, English Otome Games, made a post about my kickstarter at launch. I also have been advertising on several Visual Novel sites, like Sakevisual’s blog, using Project Wonderful.
I’ve been keeping Tumblr, Twitter, DeviantART, and Facebook constantly updated on our progress throughout the campaign so far.
And yes, I’ve been checking Kicktraq often since the launch of our campaign. I really like their mini chart, which provided information such as how much money per day I needed to make in order to reach my goal. It’s very useful.
Do you have any tips/advice would you give to anyone looking to start a Kickstarter?
My best advice is to do your research. Write notes about things that you love and hate about other campaigns. Make notes about things that could be improved on. Learn from others, the information is out there. And definitely, read these interviews, they were so helpful when I was doing my research.
Also, if you have a demo for a game, upload it to multiple sites, even if just for a backup plan.
And once you start your campaign, be open and honest with people. Treat them well, like the person they are behind the screen, rather than just another number on your backers list. They’re helping you with your dream, it’s best to let them know how much you appreciate it.
Thank you for spending your time with us!  Do you have any final thoughts for our readers?


I just want to thank everyone for helping me achieve my dream. I absolutely love this opportunity I have, and I will do my best to make the best game that I can. Thank you for this interview, it was an honor.