Welcome back to another Kickstarter Conversation!  Today I am pleased to be joined by Chris Dias who is here to talk about his work on the Amethyst Kickstarter.  Thank you for reaching out to us Chris, it’s a pleasure to talk to you.


Amethyst sounds familiar where have I heard of it before?  Could you tell us all about it?


Amethyst was published as a D20 role playing game in 2008, which caught the attention of Goodman Games who released an updated version to 4th Edition D&D in 2010 (Foundations).  Since then, we also released a Pathfinder edition (Renaissance) as well as an expansion for 4E (Evolution).  The whole series has been well received by critics and fans because of its mature approach to material often looked upon as juvenile--that of a setting revolving around the conflict of magic and technology.


That’s right, I knew I’d seen those books around before!  I’ve always enjoyed tech vs magic type settings, but what sets Amethyst apart from other similar concepts like RIFTS, Shadowrun, and just Steampunk in general?


Well, Amethyst is not technically Steampunk--about the only thing Steampunk from a visual standpoint is that you might see the odd airship or two.  And both RIFTS and Shadowrun deal with a setting where magic and technology can effectively occupy the same space.  I would also make a case that these settings in general often glorify the blending of genres without looking into the social difficulties of such a mix.  They present the end result--their desired setting--without asking how society would actually work.  Often times they can’t.  Amethyst has no cyberpunk elements and is more about the direct conflicts of two genres with opposing ideologies.  To enforce this conflict, we introduce disruption, that is the tendency of magic to disrupt technology, as both a gameplay element and a critical setting function.  With the threat that magic can take away your internet, central heating, and refrigerator, suddenly those people previously in love with fantasy novels and role playing games find themselves at odds over which world they would actually wish to live in. 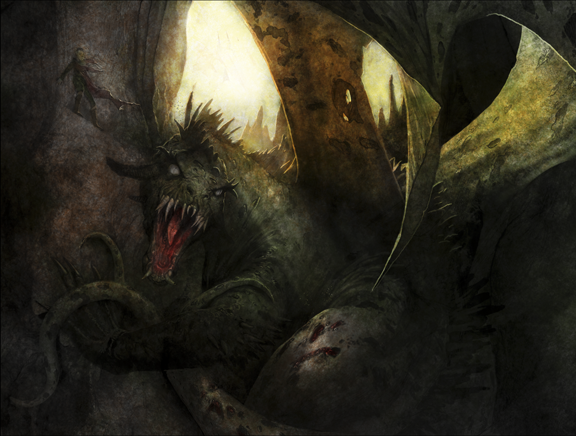 I don’t think we can talk more about Amethyst without bringing up the wonderful art you’ve got on display with these products!  Who is in charge of the art direction and how many artists do you have on the project?


I have one.  Just one.  Oh, sure, I’ve employed others with previous books and with other products DEM has released (some of whom people will no doubt recognize) but Amethyst’s visual side truly only has one voice, and said voice has maintained a constant vision on par with my own.  That man is Nick Greenwood, responsible for 99% of all artwork in Amethyst and who will be responsible for all artwork funded by the kickstarter.


The art you’ve shown has really done a good job of showing off the scenarios that exist in this crazy mixed up world you’ve created.  Yet at the same time it seems to give off a dark and mature feel to it all.  Is that all there is to the world of Amethyst?  Is the setting all dark and serious with no real light to play with?  I enjoy a good dark and mature setting as much as the next Game Master but I also enjoy the fun of bringing light to the darkness.  A fair or circus perhaps?


When it comes to the blending of science fiction and fantasy, I think the fact we address it with with a mature eye, and the setting with a certain grimness to it, helps aid in its authenticity.  One compliment we often receive is that despite how far fetched the setting appears, it actually feels lived in, if not real.  Now, that being said, I won’t claim it doesn’t have its light side.  For one, I’ve always wanted Amethyst to be romantic, and I’ve always considered its dominant characteristic to be not about the conflict of magic and technology, but rather how certain people and races are able to work past these obstacles to forge alliances, even relationships.  I don’t run an Amethyst game without some element of romance across the divide. 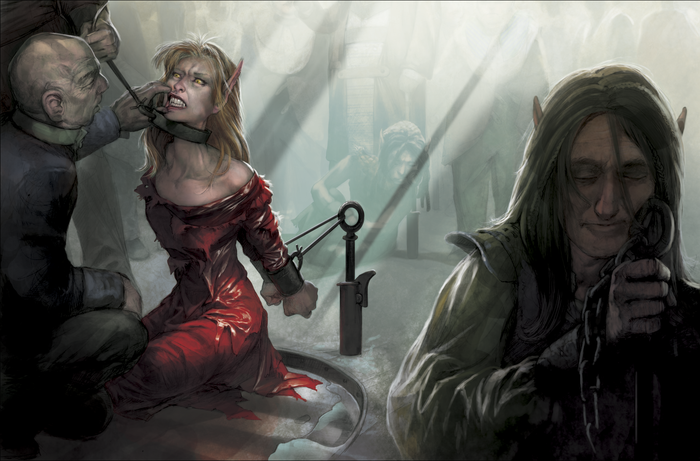 One of the first questions I had when you Tweeted me about your project was that it was for 4th edition D&D, D&D Next, and Pathfinder only.  Now I see you’ve added Fate Core (WOO!), 13th Age, and Savage Worlds.  What made you add these extra systems?  What allows you to add systems but not increase the goal of the Kickstarter (if you could)?


The goal of the kickstarter is to fund artwork and artwork alone (with stretch goals including other projects like a soundtrack).  So it doesn’t matter how many systems we support since the artwork will be the same for each book.  I am well versed in D&D 4E, Pathfinder, and D&D Next (the latter thanks to being on the playtest before most anyone else could).  My editor for the past five books is a master at Fate Core, and a loyal and long-running fan has stepped forward to help us with the Savage Worlds adaptation.  The framing fiction and setting detail will also be duplicated.  So fans who pledge won’t need to choose their preferred edition--they’ll get them all.


Wait, so all $8000 is basically just for art?  Everyone who gets a core book ($20) or the complete Amethyst collection ($40) gets the rules for all the systems?  Is all the non-art costs coming out of your coffers and not the Kickstarter?  Will there be multiple PDFs for each system or just all in one PDF/book?


Exactly.  I have not kept it silent that I, the game writer, am receiving NO income from the Kickstarter.  I’ll see that when the products sell retail.  The Kickstarter is just that, to get the ball rolling.  My artist needs to eat.  I don’t.  :)  The books are being released independent, so someone wanting the Fate Core version won’t have to bother themselves with the others.  At the $40 level and above, those who donate will receive a ton of digital content.  The biggest is the $70 where you get all the artwork as a separate file, and I’m not kidding, these images are huge.  Some artists send images like 500K or 1.5 MB.  HAH.  Not Nick Greenwood; one illustration is a gigabyte and that’s just one of over a hundred images which fans will get at the $70 and up level.  And with those you can print them, hang them, put them on shirts... 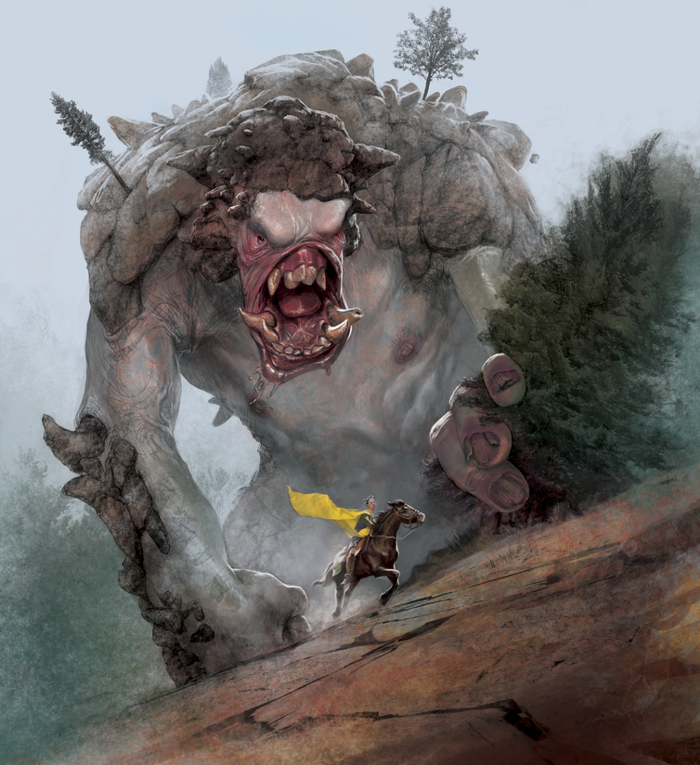 As someone who watches Kickstarters and recently reading a Penny Arcade Report about how bad physical rewards can be I find it interesting you went with a purely digital reward system.  How big a deal was it for you to make sure there was nothing to ship?


The issue with physical rewards for me is that very often they do nothing to actually help the campaign, and often they cost considerable money to make and ship.  Half the time, the rewards aren’t terribly rewarding because of how vapid they end up being.  A novelty USB or a fancy pen--these don’t contribute to one’s enjoyment of the actual product, and their creation is tacked onto the Kickstarter as part of the development cost.  I wanted to keep the goal low to increase the chances of success.  I know the lack of physical rewards will turn off some but I am hoping we are compensating by offering so much digital content.  As for the lack of physical books, this is related once again to the desire to keep the campaign goal low.  That being said, we are working on the numbers to include physical books (Print On Demand) at some of the higher tiers.


By the same way as almost everyone else.  Numenara.  :)


We are planning on some more videos soon to explore and explain the setting in greater detail.  And I have been endeavoring to keep the project updated on a regular basis.


Facebook and Twitter have been good to us.  13th Age recently tweeted about our campaign.  We don’t have the budget for heavy advertising, so we have been depending on dogged determinism and word of mouth.  The Kicktraq shows us buzzing along at a nice clip but I really really really want that soundtrack.


Yeah, make sure you don’t have night classes, a full time job, and a weekly gaming group when you start your campaign.  It may lower your stress.


Yes, I would really like to keep writing for Amethyst.  There is so much more to share about the setting, and this Kickstarter is my best chance