It Takes More Than Just the Captain to Control a Starship! PULSAR: Lost Colony

Welcome back to another Kickstarter Conversation! I am pleased to be joined by the team from Leafy Games to talk about their intriguing Kickstarter PULSAR: Lost Colony.  Thank you all for joining us today!


Hello James! Thanks for having us! We are always very excited to talk about our game! The whole Leafy Games team is pitching in today - George, our artist; Preston, our programmer; and Jenn, our writer.


Now that you’ve made every Star Trek fan on Kickstarter jump for joy could you tell us all about Bridge Simulator, I mean PULSAR: Lost Colony?
Sure! PULSAR: Lost Colony is a cooperative starship simulator that features rogue-like elements such as random galaxies and perma-death. The main objective of the game is for you and your crew to locate the mysterious Lost Colony by exploring, engaging in combat, and gathering information to aid in your search. However, the game won’t be a walk in the park, as there will be many challenges to overcome in order to survive your journey.


Besides letting me become Captain James J Yee what does PULSAR offer that Artemis: Starship Bridge Simulator doesn’t?
We believe we started with a similar core idea and simply took it in a different direction.
In PULSAR: Lost Colony,  we implemented first-person perspective mechanics along with fully built interiors for each ship and space station. A big part of the game for us is the ability to look out the window of starship while your friend is piloting, or to see enemy missiles shooting towards you as you man your station!
A large focus for us was to provide an immersive adventure that can be experienced in single- and multi-player modes. Putting the player in dangerous and hectic situations is strengthened when the player has the ability to directly observe not only their ship interior, but also new and strange locations out in the galaxy.
Artemis provides an very unique experience, but it also has a steep requirement in that it is difficult to set up on a whim. We think PULSAR: Lost Colony makes it easier than ever to adventure out into the galaxy in a variety of co-op modes and have the starship crew experience!


Okay the next obvious question has to bring up the five classes included in the game.  The Engineer, Weapons Specialist, Science Officer, The Pilot, and the Captain of course all make perfect sense.  I have to ask though, where’s the doctor?  Who’s going to tell me “He’s Dead Jim?”
The Scientist actually functions as a doctor. In addition to hacking and research, Scientists are responsible for medically supporting the crew. Hopefully, if the Scientist does his job right, he won’t have to declare anyone dead… But we both know that won’t be the case, more often than not. Thankfully each ship is equipped with an Atrium (or respawner), so somebody has to screw up big time to make everybody else die!

If the universe is procedurally generated how random are the events that can occur?  Is there really a lost colony in each game session?
The way we are approaching random galaxies is based off of a random seed. You can think of the game as a giant box of building blocks. The game chooses a bunch of these pieces and assembles them randomly to ensure no playthrough is the same. We will not consider the game to be finished until there are tons of pieces to intermix, and we also hope to add more in free updates after the game’s release! Every play session will include the opportunity to find the lost colony.
If you have ever played FTL, it will be somewhat similar to how those interactions work, except with more of an open world feel with no constraint on direction!


I guess the next question has to be, Player Vs Player combat.  Will I be able to take my ship and battle against another ship crewed by other people?  Will we be able to join forces against some dangerous space creature?
Both of those are awesome ideas! One of our stretch goals includes the potential to interact with other player crews during the game. We would love to work on this for a possible update later, whether we release the stretch goal or not.


What is up with those Fluffy Biscuit Company folks?  They can’t be what they claim, running around with industrial replicators and “transport ships” all over space.  They must be up to something!  Do you have fun things in mind for all of the factions to do or will it all be up to the players making their own fun?  (Like hunting down every Fluffy Biscuit Company ship I see to stop their evil machinations before it’s too late!)
What you are talking about? The Fluffy Biscuit Company is a wholesome business dedicated to spreading warmth and joy to even the darkest corners of the galaxy! I can’t believe you’re doubting their integrity! Just try one of their biscuits. You’ll be a believer for sure.
We plan to have each faction provide an interesting and fun experience, we anticipate it being especially fun to role play with your friends as each faction as well. We also really love the idea of people making their own challenges, one could very well be to hunt down every Fluffy Biscuit ship you see!
We are doing our best to not take the game too seriously. Amidst the weighty conflicts of the galaxy, a little humor doesn’t hurt.
With three weeks to go you’ve already reached your goal, congratulations!  How surprised are you to hit your goal so soon?  Why do you think you’ve done so well?
It has shattered even our most optimistic predictions. We are still in awe at the overwhelming positive response, and we are so excited to work on this game to fulfill the expectations of the people who have believed in us at such an early stage! We can’t thank everyone enough, and it is truly mind blowing to have gotten this far.
Perhaps we did well because the idea seems to resonate with people, plus the fact that we’ve illustrated our progress through the video devblogs and Screenshot Saturday. We’ve also been lucky enough to be contacted by a few big YouTubers!


I enjoy looking at the higher level backer rewards and imagine what I’d do with thousands of dollars.  It seems I’m not the only one as you’ve already sold out of your $5,000 and $500 tiers!  Were you expecting to have that many bars, let alone an entire faction purchased so quickly?  How exciting/scary is it to offer that level of input from a total stranger?
After seeing a bunch of kickstarters that offer enormous rewards, we figured we might as well give it a shot too. We half expected the higher rewards to just sit there, but we were very surprised when they sold out! It is initially quite scary to hand over a piece of your game, which is like your baby, and let someone else’s ideas determine its direction. But after reading the requests, we’ve realized that our supporters are just as excited about this game as we are! It has been very interesting to hear other people’s ideas, and I’m confident it will be a joy to work with such passionate people!
On a side note, we will not accept anything that would damage the game or experience, as we do get the final say. However, we don’t anticipate this being a problem! 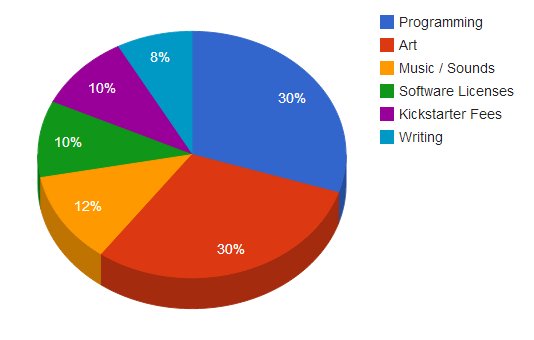 Yep, that Pie Chart means a Budget Breakdown!  WOO!  For those just now joining us, one of my biggest bugaboos for Kickstarter projects are budget breakdowns.  These basic business tools let potential backers know that you have a plan for the money and aren’t just going to wing it.  How important was it to you to include this breakdown when you launched your project?  Do you think it has helped your campaign at all?
We’ve backed a number of Kickstarters ourselves, and we really love to see that the project developers took the time to estimate the costs. It helps them seem more prepared. With that knowledge, we felt our backers would feel the same way. It’s important to understand that these are also estimations, and from everywhere we’ve read, we can gather that it’s always more expensive and time consuming that you think. But we have a bit of savings stashed away, ready to help overcome the unanticipated challenges of game development. We do believe having a cost estimation chart has helped the success of the campaign.


We first heard about Kickstarter back during the Double Fine Adventure game! We knew back then that this could change everything, as publishers were no longer necessary to make a successful game. We love Kickstarter very much for providing this opportunity to the indie gaming community.A key part of successful Kickstarters is backer participation and how to convert a potential backer into a full backer.   How are you engaging your backers?  What kinds of things do you have planned for updates to give notice to those who just hit the “remind me” button and surf on?  Interviews?  Videos?  Stories from the project?


Absolutely! We plan on doing as much as we can to participate in the community, and we want to regularly update them about the game’s progress.
We can do live streams of development, discussions about the systems of the game, perhaps talk about possible scenarios players can encounter, or dive deep into the lore of the game and provide interesting perspectives on the factions!
What kind of media attention have you received with your project?  How are you spreading the word?  Facebook?  Twitter?  Google+? Youtube?  Advertising?  Are you using Kicktraq to track your progress?


We mainly use Twitter and YouTube, but there have been a few pockets on Reddit as well. It’s been mind blowing how active our fans have been; they actually beat us to the punch in a lot of respects!
We have been using Kicktraq. It is a pretty great tool to view the Kickstarter’s progression, and I’d recommend it for anyone interested in running a project!
Do you have any tips/advice would you give to anyone looking to start a Kickstarter?


Make sure the idea is good, and get feedback from other places first. If people really seem to like the idea, then do your best to answer as many questions as you can when you launch the campaign! It also helps to build as much of a community as possible before you start the campaign. A big focus for us was being able to drive traffic to the Kickstarter on day one!
Another tip is the learn how to best present your project. We found that PULSAR: Lost Colony is strongest on video, so we focused on that from the beginning, which seems to have been very helpful.
Thank you for spending your time with us!  Do you have any final thoughts for our readers?


If any of you are interested in what we talked about here today, feel free to check out our page and never hesitate to ask us questions! We will do our best to answer as many as we can! Thanks so much for your time.
Thanks again and I hope to hear good things from your Kickstarter!
Thanks again for having us! We hope you hear great things too!