Welcome back to another Kickstarter Conversation! Today I am joined by Justin D. Jacobson from Blue Devil Games is here to talk to us about Dawning Star: Fate of Eos.  Thank you for joining us today Justin!

My pleasure. Thanks for having me.

Let me start off by congratulating you on hitting your $10,000 goal with two weeks to go, well done!
Thank you. I was cautiously optimistic when we launched. But you never know for sure. The one thing I held onto was the passion of our existing fans. We didn’t set any records the first time around, but the fans we did have really appreciated the work we did on the setting. 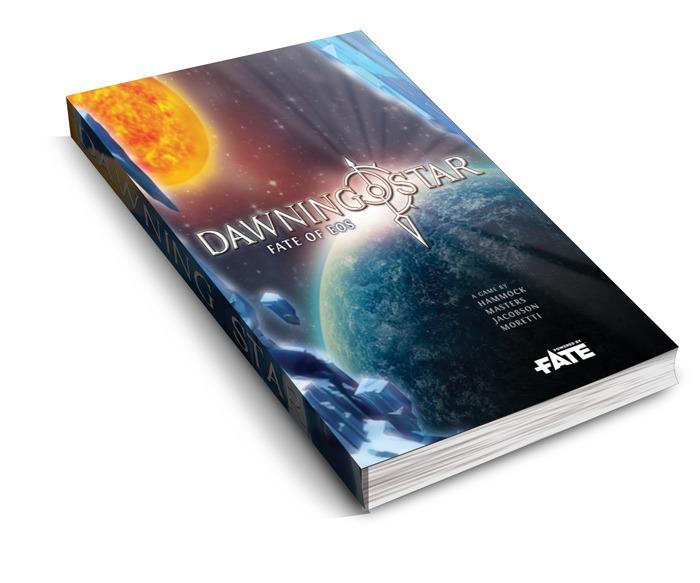 Looking a bit into Dawning Star I’m disappointed that I never discovered your game setting before this!  It seems to be the kind of sci-fi I love, could you tell us about the setting?
We put a lot of effort into maximizing the setting’s fun and utility. One of the quirks of science-fiction as a genre is that it has tons of sub-genres. Whereas fantasy is a little more homogeneous. Therefore, we focused on creating a setting that accommodate as many of those styles of play as possible.
The premise of the setting is that an object is hurtling toward Earth. We gather together to build a fleet of evacuation sleeper ships and set a course for a habitable planet in a nearby system. At the edge of our system, the fleet inadvertently interacts with a long-dormant gateway system that activates and scatters the fleet to the four corners of the galaxy. The setting follows one of those ships, the Dawning Star, which ends up in the Helios System. We find a surprisingly habitable planet and land. In the years that follow, we build a new society, encounter exotic species, and begin to uncover some shocking secrets about our new home and even ourselves.
You can download a more detailed summary from the website: http://dawningstar.com/wp-content/uploads/2013/09/DS-OQL-Preview.pdf
We’ve maintained our design focus. So, no matter what type of sci-fi you like, you’ll find something to support it in the setting, whether that’s hunting through ruins for powerful alien artifacts, taking the helm of a starship to visit the other planets of the system, or maintaining law and order in Dawning Star City.

With Fate coming off a huge Kickstarter it seems like a match made in heaven combining Fate with Dawning Star and putting it all up on Kickstarter.  What got you to consider Fate?  How hard has it been to adapt the Fate system to Dawning Star?
I’ve been friends with the Evil Hat guys for some time now. I worked with them creating D&D 4e support material under the One Bad Egg umbrella, and I’ve done legal work for them for years. So, I’ve always had it in the back of my mind. I’d been looking for a way to relaunch Dawning Star for some time. Following the success of their Kickstarter, it was obvious that there was a huge fan base we could build on.
In some ways, adapting to Fate has been liberating. While I’m extremely comfortable with the d20 system, it’s very dense. Probably the best example is in creature statblocks. They just take up so much more real estate in d20 than they do in Fate. So, switching to Fate has given us a lot more room to add setting elements rather than dozens of situational modifiers.
Fate is a great fit for Dawning Star.

Wouldn’t it have been simpler just to change out the stat blocks and make it for Fate instead of D20 Modern?  What made you want to relaunch the whole system using Fate?
No doubt that would have been easier. But it would have been incomplete and a disservice to the fans. The difference between Fate and d20 is not merely mechanical. It’s a difference in focus. Fate is much more concerned about creating great fiction at the table, whereas d20 is more about mathematical optimization. That’s not to say that one system is better than the other. To really make Fate hum, we had to rework some things to better serve that goal.
What kind of big changes to the lore can fans of the original release look forward to with this relaunch?
For Fate of Eos, we’re advancing the timeline a few years. So the humans have more fully settled on Eos, explored more of the system, and encountered more of the system’s inhabitants, discovered more of the long-forgotten history of the system.
The relaunch also sees two big events. One of the other evacuation ships, the Evergreen, arrives, creating a strain on resources and relations, and seeing an influx of new species. How the citizens of the Dawning Star handle this new change makes for some great challenges. Additionally, the primary antagonists of the setting, the vaasi, begin their first maneuvers in an all out war of annihilation. In the original setting, the vaasi were just getting a foothold in the system. In Fate of Eos, they actually begin attacking. 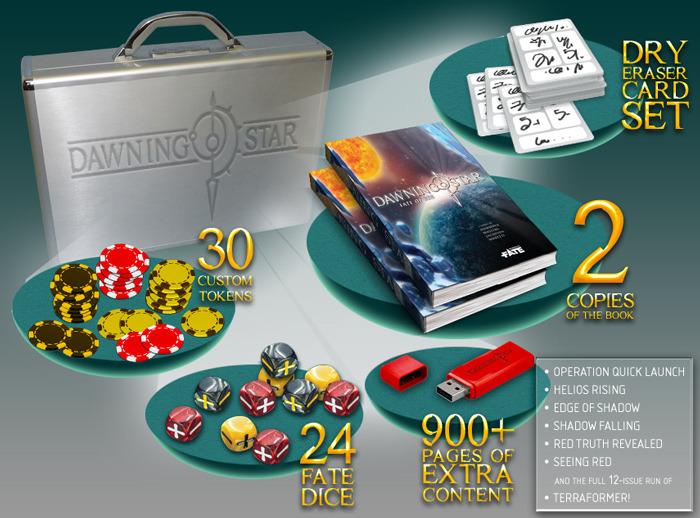