She Came from the Great White North, it's Nelvana of the Northern Lights!


Welcome back to another Kickstarter Conversation!  Today I welcome Hope Nicholson and Rachel Richey to the conversation to talk about her historical Kickstarter Nelvana of the Northern Lights: Canada's First Superheroine.  Thank you for joining us today Hope & Rachel!
Hope: Thanks for having us! We’re so excite to talk to you, especially since we just reached our 25, 000 goal

Your project caught my eye for its historical context as well as bringing something to my attention I never knew before.  Could you tell us about your project and its historical heroine?
Rachel Richey: One of the first superheroines in comics is Canadian! Essentially this series has been buried since just after WWII and Hope Nicholson and I are bringing her back to the public to enjoy, appreciate and cherish as part of a greater unknown history of comics!
Hope: Nelvana is an Inuit demigoddess who uses the power of the Northern Lights to fight her foes, usually Nazis or interdimensional villains. She was created as a collaboration between the group of 7 artist Franz Johnston, who brought back stories he heard while travelling amongst Inuit villages, and Adrian Dingle, an accomplished and ambitious fine artist in Toronto. Adrian Dingle reformed her into the image of his lovely wife, and created a new comic book publication called Triumph in order to showcase her adventures (and various other stories). 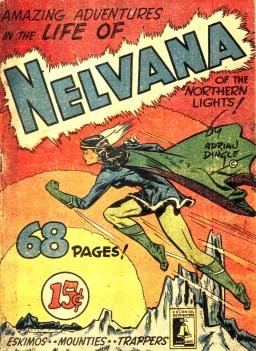 Nelvana sounds like she was ahead of her time.  How did you come across her story?  What made you want to bring her back to a modern audience?
Rachel Richey: Nelvana WAS ahead of her time. She predates Wonder Woman by a couple months, she’s based on inuit mythology and she herself is half inuit! Hope and I both stumbled upon her fairly accidently, while digging around in Canadian comics history which is something we’re both very passionate about. Luckily she is one of the better known Canadian Golden Age heroes, but that is relative. Once I discovered how awesome she was, compared to how obscure she was, I was infuriated! How can Canada have something this awesome and so seemingly disregarded. No one knows and that’s objectively wrong!

Hope: Nelvana was truly amazing, I discovered her while researching forms of Canadian made media when I was an academic. A few years later and a significant amount of research led me to spend a few months combing through microfiche in my local library! I grew especially fond of those microfiche machines over that long period of time because it meant I could finally read the comics that I’d been curious about for years. I wanted to bring her back, because not only is her story and art amazing, but I didn’t want anyone to have to go through as much trouble as I did. She should be completely, easily accessible to all Canadians, and all comic fans in general!
The Canadian comic book industry sounds like an odd thing to say from an American point of view, but that wasn’t always the case was it?  What happened in World War II to allow the Canadian Comic industry to flourish, and then allowed for its fall?


Rachel Richey: During the second World War, Canada banned non essential goods from being imported to preserve the Canadian dollar. Five Canadian publishers took advantage of the open market and began producing comics, one of them being Hillborough Studios’ Triumph-Adventure Comics created by Adrian Dingle, which featured Nelvana as the lead story! She appeared in the very first issue in 1941. Unfortunately, after the war ended, the ban was lifted in 1946. American comics reentered the Canadian market and Canadian comics could not keep up in terms of production quality. So many publishers ceased publication and fell into obscurity.
Hope: There’s some indication that during the short period of overlap when both American and Canadian comics were available, the Canadian comics were sometimes more popular than the American returned comics. But American comics were in colour and had a much larger local population buying the comics which made their costs significantly lower. Canadian companies just couldn’t compete with these economics. 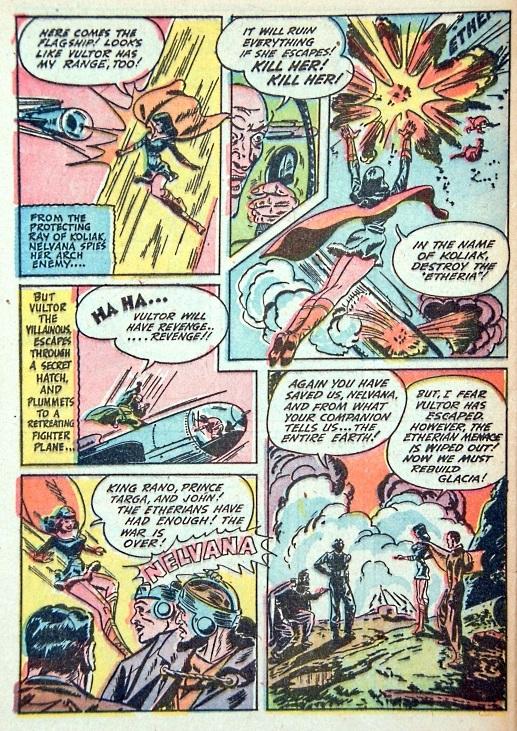 What exactly are you putting into this book?  Every issue of Nelvana you can find and put into printable order?  Will there be a history section and stories as well?
Rachel Richey: We’ll have great introductions from Benjamin Woo and Michael Hirsh, 31 issues of Nelvana and a special colour issue as well, all reprints. We’re also going to include the covers of Triumph comics that Nelvana was featured on and any other content.
You have assembled quite the team of talented Canadian comic artists.  How did you get them all on board?  How many of them knew of Nelvana before you came along?

Rachel Richey: Some of them knew vaguely. Kalman Andrasofsky knew a little more as he’s the artist and writer on staff for the new Captain Canuck. Ramon Perez did too because he’s very much a fan of older art. Otherwise I’m not too sure but most really only have a passing knowledge of the character, if at all.
Hope: Most of them had to listen through me and Rachel’s spiel on the character! But after that we seemed to convince them of the value of the project. Most of them spontaneously offered to contribute art, which was unexpected, and amazing. 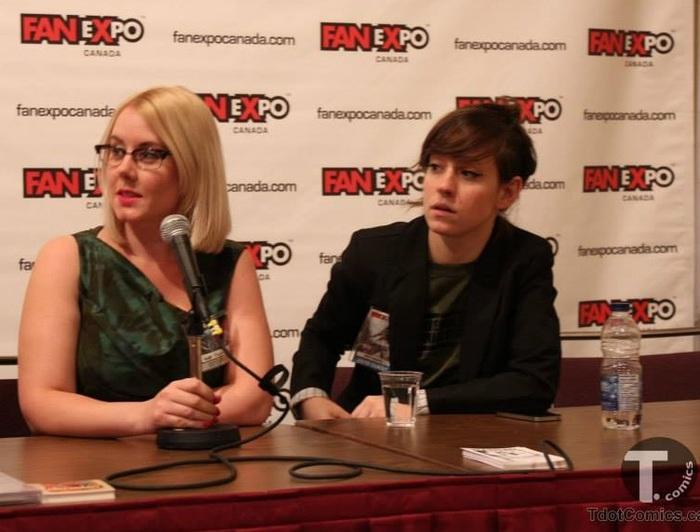 A key feature I look for in any Kickstarter campaign is a budget breakdown.  While you do explain what the money is going to be used for you don’t really go into any detail, is that because the details are still very much in flux considering travel, condition of the originals, and the like?  Now that you’ve hit your base funding goal are you breathing a bit easier on the budget side of things?
Rachel Richey We definitely are. Although we’ve ironed out the most limited budget we could, extra funds can always go into promoting the book. That’s Nelvana’s biggest problem, 70 years of obscurity. Also, we know of five private collections that we can obtain scans from, which is good considering the age of the books, but none of them are very local. That said, we are definitely breathing easier.
Hope: We have a full budget breakdown that we used to calculate the necessary funds we needed to raise, but a lot of the specifics will be in flux depending on what options we go for with printing, how much travel we need to do to get the scans, what technology we will need to purchase to put the book together, etc. I’m definitely more relaxed now that we’ve hit the goal, since now it’s clear to us and everyone that Nelvana is on her way back.
How did you discover Kickstarter?


Rachel Richey: Kickstarter is great for comics so I’ve known of many projects that are alive and available because of kickstarter. It allows for somethings that might not get mainstream attention, and products form people who are really passionate about what they do. When we found out that it was going to be Canadian, that’s when we got really excited.


Hope: I found out that Kickstarter was coming to Canada through trade magazines (I work in media). A close friend of mine, James Cooper, had previously used Kickstarter to fund a film project, and had nothing but good things to say about the service. He’s considered a bit of an expert in the crowdfunding field, in fact we both accidently started our recent crowdfunding campaign at the same time! I’m very happy to say that he met his goal too, so neither of us has to be jealous of the other, ha! 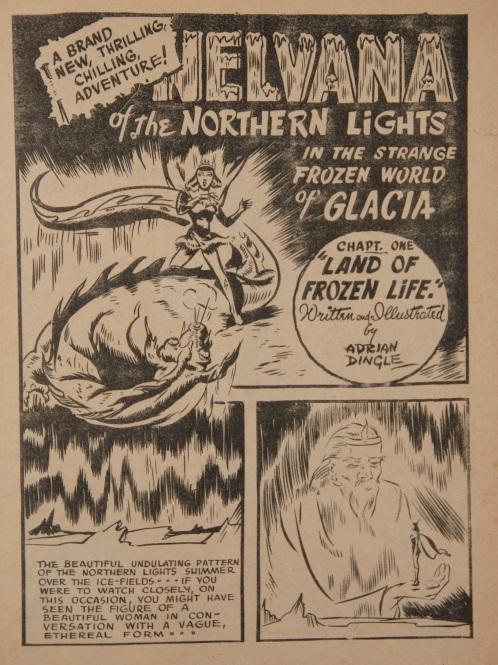 A key part of successful Kickstarters is backer participation and how to convert a potential backer into a full backer.   How are you engaging your backers?  What kinds of things do you have planned for updates to give notice to those who just hit the “remind me” button and surf on?  Interviews?  Videos?  Stories from the project?
Rachel Richey: We constantly have people giving us fan art, and now that we’ve hit our target so early, as we begin some production on the project, we plan on keeping everyone involved through our facebook and twitter. Also, stretch goals. I think it’s really important to remind everyone of the quality of the book they’re getting and that they’re on board with the making of history, again! A lost gem is returning to the comics industry!
Hope: The incentives that are being created for the project have a deadline of January, but many of our artists are already finishing their work now. We’re excited to show this to our funders which will engage their interest in the prints and original art sides of the project. Aside from that, we intend to use the updates to fill the backers in on the process that we are going through. For example, me and Rachel will shortly be travelling to local private collections, and we intend to document this process for our funders.
What kind of media attention have you received with your project?  How are you spreading the word?  Facebook?  Twitter?  Google+? Youtube?  Advertising?  Are you using Kicktraq to track your progress?
Rachel Richey: We’re on Facebook, twitter, and we’ll being the Toronto Star and InnerSpace.
Hope: I’ve used Kicktraq to view some of our stats, and it’s been interesting, but I prefer to do my own data analysis and research. I have to say I’m really pleased with some of the functions that Kickstarter has to analyze the source of the data, that’s been an enormous help.
We have a presence on social media through Facebook and Twitter, but our interactions in forums and blogs has been an enormous help. As Rachel said, we will also be appearing in a few newspapers and television programs to discuss the project. Google Alerts have been great to to track unusual sources of publicity that have mentioned the project. 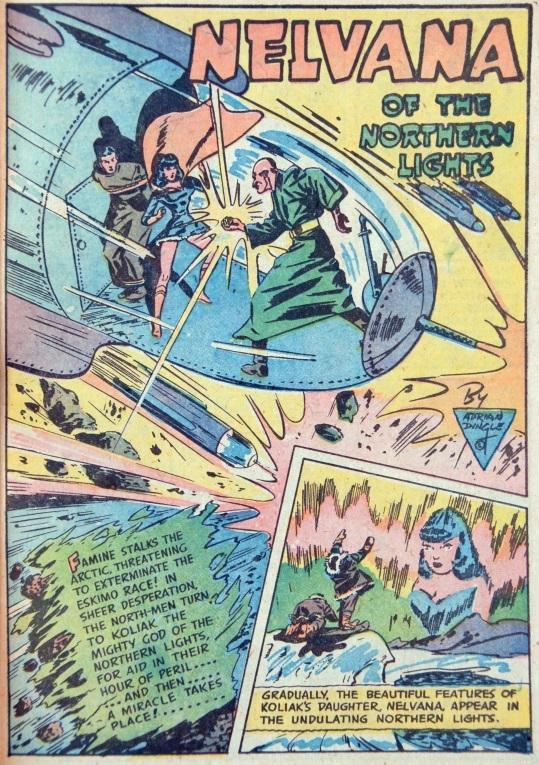 Do you have any tips/advice would you give to anyone looking to start a Kickstarter?
Hope: Yes. For one, submit the project for verification and approval at least one week prior to launch, You’ll rest easier. I unfortunately wasn’t aware of the verification delay process, and it was a frantic launch day for me! Other than that, very few of our donations came directly from Kickstarter ‘walk-bys’ before we were featured on the front page. We got to the front page because we knew the community inside and out, and spent months if not years connecting to interested parties. Know your demographic, know them as people and friends, and know where they congregate online. The majority of our funding up until being featured came from Facebook, Twitter, and forum fan members.
Thank you for spending your time with us!  Do you have any final thoughts for our readers?
Hope: I’ve seen projects fail because the starter didn’t put in the necessary work beforehand to research their community, or the topic was so specifically personal to them that it excluded external funders. And if there is no community or market, maybe it’s best to consider if this is the type of project that you should be asking people for funds. We’re lucky, because we are both extremely passionately in love with this project, and it’s of considerable interest to Canadian/comic book culture. It’s best to focus on projects that the public can engage in, and that you’re passionate about.
Thanks again and I hope to hear good things from your Kickstarter!